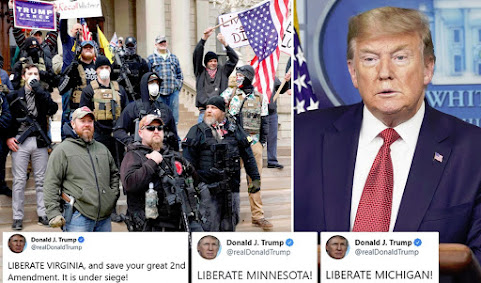 Prez Trump is talking tough but we fancy ourselves a critical thinking blog community of scumbags and share some doubts about anybody fighting for the honor of a TV game show host.

"Trump's tweets pushed many online extremist communities to speculate whether the president was advocating for armed conflict, an event they’ve termed “the boogaloo."

WHILST THE "KANSAS CITY BOOGALOO" SOUNDS COOL IT'S ALSO A LOT EASIER TO FLEX VIA SOCIAL MEDIA THAN IN REAL LIFE WHERE THESE KINDS OF PROTESTS ALMOST ALWAYS DISAPPOINT!!!

Even worse, keyboard warriors love fighting and worsening American division in the abstract but aren't good for much beyond bullying housewives.

Notice that sources for local reports refuse to share many deets and don't have the courage to use their own names or do anything but exchange ghost stories with newsies . . .

KCTV5: Protest against stay at home order possible in KC

Check the sketchy story highlights in what could be a very elaborate ruse for authorities to gather & coordinate surveillance against haters in one convenient location:

"There have been rumors going around that there will be a protest against the stay at home order on Monday at noon in downtown Kansas City.

"The event doesn’t have an exact location, however.

"On Friday, KCTV5’s Greg Payne spoke with one gentleman who didn’t feel comfortable speaking on camera about the event, but said he is going and that he is aware of many people going . . ."

They’ve planned protests throughout both states next week. Locally, there’s a call to flood the now empty streets of downtown Kansas City on Monday and another protest planned at J.C. Nichols Fountain.

“If you take a virus that’s highly contagious and respirable and you want to open up society, is there a worse way to make your point than to make everybody sick?” said Dr. Steve Stites with KU Health System.

We're eager to hear arguments both for and against the effort. We'll wait and see if this is anything but another cringe-worthy political flex amid the infinite loop discourse of the absurd . . . From a safe distance, of course.

The Michigan misadventure adventure will probably raise coroavirus stats for months. Real shame anybody who gets sick from it.

A convention of super spreaders.

If real conservatives had any decency, they would tell anybody protesting to stand down.

No reason to put everyone at risk.

At least the Coronavirus is curing smokers, ending their addiction to cigs! The recovered smokers I have been presented with can't smoke anymore as it would quickly kill them. This is a lung virus that decreases capacity by 30 to 40%. So smokers must quit, and quit they do!

Maybe the best chance to generate revenue for the city.

This pandemic sure is exposing the real truth about white america, biggest bunch of screw-ups in the world. Always running their mouths about how great they are when we have over 36000 deaths and the most cases of the virus than any other country in the world. Dummies

These protest are and will go on despite Trumps tweets. Don't forget the protests and violence the Kansas City mayor sly James incited after the election. You all just remember that before you blame Trump.

They should wait until Thursday when City Council is in session. The police should focus on the violent crime in KC not protestors.

Poor Crackheads, methheads and pot heads all had to stay home for a few weeks. Violent crimes continued, domestic abuse increased and the stupid bastards still failed to respect their fellow citizens and Country. Poor little losers. Poor little you.

only 500,000 lives are lost each year due to smoking, How dare you attack SMOKERS.

We still can't get our Kansas unemployment checks !!

At least reopen the churches!!!

Hey 7:50 - The United States Surgeon is African American. I suport him and voted for Barrack Obama.

Very soon the cities will be looking to revenue from citations for violations of stay at home orders in order to pay municipal and county employees' salaries.

Yeah what ever you don't protest it's anti-American. Your rights are just for talking about not exercising.

Fake plague deserves a real protest. We can wear masks and social distance and open the economy. If you are high risk or scared you can stay home, the rest of would like to carry on with living, life has always come with risks and this risk is low.

Yeah out of 330 million, some people just have to be duplicitous.

36k is nothing to shut and entire country down over especially since most us deaths are in New York city and in MO 75% in st Louis, which are boths
less than 30% white BTW. Why does every small town unaffected need to be shut down

Sweden that has done virtually nothing is no worse off.

Wrong, nanny genius.
The Smoke shops in Mo. are still open and doing their usual business. No change.

I would believe these protesters if they could liberate their heads from their rears.

Just more Trumpers who don't care about anyone but themselves.

Why don't they have a right to protest if they obey social distancing rules?

Their rights are part of the constitution. We should not sacrifice our freedom to protest when it is done in accordance with the law. That is not the American way.

Sorry, I don't want to hang out with these bubbas. They don't look like any fun unless they want to do a bit of swapping to make the party really interesting.

The Mayor is the one that is being unreasonable. The city council should not be meeting, they are not doing business related to health issues.

Priceless. When one is so dumb that they don't understand casualties vs deaths. Ability to slow down vs accelerate a pandemic and only sees a certain race or area as the problem. First grade is a bitch for some. Try getting past it and on to second grade.

Even better would be fining HIV people for having it. Not allowing them to work or be in public. Maybe tattoo their foreheads. Instead the Queer eye for the straight guy ended production in KC. Now ponder and apply.

Let them hold the stupid rally. They will all get sick, some very sick and make their kids and parents sick too. Maybe a wife or father will die from it. Only then will they realize they are wrong and that limiting public gatherings are needed. Nobody is taking away anyone's liberty. Smart people are telling lower IQ people how to survive.

Jack is Back said...

This flamed out a few weeks ago.

Go for it. Anything that thins the GOP base is good by me.

Bad idea for everyone, guess the organizers don't understand the liability they're opening themselves up to. Forget about the police, the lawyers are watching.

Jack Cashill was the first to call for a protest and then backed out once he saw liability from his irresponsibility.

Why does our surgeon general look like a fourth grade teaching assistant?

Republican credo; fuck you I've got mine!