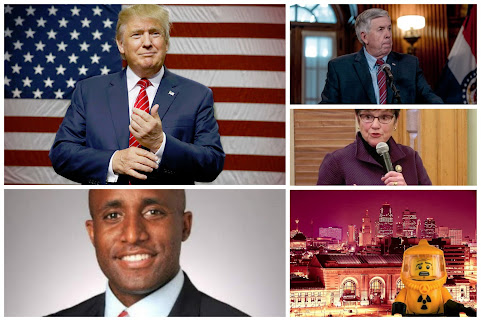 It's fair to say that Americans are about halfway through coronavirus lockdown and making some progress as "flattening the curve" whilst confronting an uncertain future.

There's a lot of room for debate and right now we merely offer some background links to consider the legacy of elected officials during this historic moment in American history . . .

KCTV5: What factored into Mayor Lucas extending the stay at home order

Fox News: Trump unveils coronavirus guidelines for rolling back social distancing in phases: ‘Next front in our war’

Daily Wire: You’re going to call your own shots,” President Trump told the governors on a collective phone call.

MAGA will of course chose the President and no one else. That's all they know.

But out of all of them, if you look only at the stats, Mayor Q has less infections in his part of the world.

That's because KC is much smaller than any of the other places.

Consider logical consistency. All of these elected officials have gone back and forth. Only Governor Kelly has remained on message throughout the whole ordeal.

Politics needs to stay out of pandemics.

Not sure any of them have done an A+ job considering how many dead people there are.

Somehow "I have ABSOLUTE Authority" and
"You have to decide on your own" don't seem to work together.

Kelly should resign for how the unemployment situation was mishandled.

Protests planned in KC, Missouri and Topeka over shut down. I'd say that all of them have done a pretty piss poor job.

Bullshit! She's been on Twitter playing the Obama blame game which is a sign of weakness. Anyone that blames others exposes themselves as less than an effective leader.

Trump should resign for the broken PPP small business loans, delays in taxpayer relief checks, $2.2 trillion of new spending, over 15% unemployment rate and growing, a great depression level economic crash, business bankruptcies, months of failed testing, months of failure to produce and coordinate distribution of protection and medical equipment, numerous mission accomplished predictions (go away when the weather warms in April, going to zero in March, open the packed churches by Easter, it's totally under control, and China has been completely transparent and working very strongly with us), and over 33,000 dead (so far).

Trump should have been removed by the Senate for Abuse of Power.

Only Dr. Fauci stood between us & catastrophe.