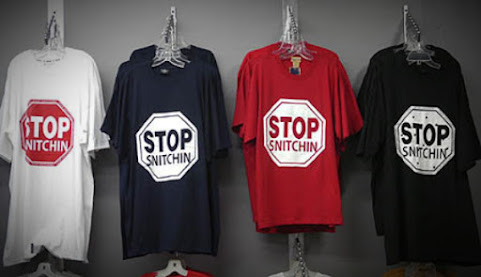 Juxtaposition for tonight given that more than a few TKC Readers asked us us to try to make a local connection regarding a contentious national debate . . .

OUR CONSERVATIVE READERS DECRY RECENT CALLS TO INFORM ON STAY AT HOME VIOLATIONS BUT  IS THAT JUST A RIGHT WING 'STOP SNITCHING' PLOY?!?

Long, long ago an exceptional bit of journalism perfectly documented a deadly urban trend and called out community silence that still persists . . . Here's the money line:

"One reality strangles efforts to actually stop the violence: The citizens who are most at risk are also the least willing to cooperate with police."

SIMILARLY, many years later Kansas City and the nation now confront another potentially deadly threat and this time around the demand for silence comes from our conservative pals.

PJ Media: Response to Mayor De Blasio's Snitch Tipline Is Disgusting. It Should Also Restore Your Faith In America.

Of course the effort backfired and was briefly shut down.

Here in Kansas City locals can call the po-po or the 311 line to inform on their neighbors but the resistance to this effort is palpable across the nation.

With a reported 40K Americans dead from coronavirus, many contend this is debate has moved out of the frivolous realm of "culture war" and now becomes a question of life or death.

But gun violence in the United States kills far more people than coronavirus and the flu put together.

This argument has gotten worse now that people are less afraid. Even after the president's miracle cure doesn't seem to be working.

The protest on the Plaza was at least 300 strong at one point, not a small gathering.

I think it's obvious people are frustrated with the situation and the current crop of leaders in DEMOCRAT run cities.

O.K. I'm a conservative and I think I will follow liberal rules for once. I'm going to tattle tail on my special friends in Central Hyde Park. That foul mouth Iranian with the ugly baby boy has been out talking to people and that psycho women and her husband have too. She isn't using her binoculars at night, she is getting face to face. I'm calling 311.

Kansas City just another black run democrat shithole of homeless poverty strife and despair. Just the way the lousy worthless piece of shit democrats like it. I hate them, I hate what they’ve done to our country, they should all be tried for treason.lets see them lie their way out of that

silence is a kansas city tradition. Look at the developer scam that's been running in KC for 10 years running. Basically "legal" bribery.

The Communists Country's have many snitches. China Cuba North Korea ect. The NEW America THE Globalist And World Order Finley Destroyed the Country. You have less rights now then Venezuela .Small business layoffs Big Business Don't have the cash flow to keep people Middle and some upper management are being let,go. And Winter of 2021. Will be a disaster. With half of America struggling. Stock up for the winter.

^^^ Very dire but I guess it's better to be safe than sorry. Thanks Retro.

Maybe you should look up gun stats before you type your ignorance of it. Most guns deaths are suicide, most murders by guns are caused by blacks. Blacks killing blacks centered around thug drug culture. If you want to address the problem , start with who commits it . Not blame lumped statistics to look good. Start bt asking the Feds not to include blacks lumped in with white to make one side show different than it is ( since the late 1980s) and not show suicide under murder stats. Are you asking that we do away with blacks since they commit the majority of your gun violence ? Or because they are show high in the Covid deaths ? Do you research before you post or just rattle?

Jesus this doesn't get more insane, now we are like the STASI, everyone is an informer.

Besides NYC, who believes their numbers anyway TDS mayor, governor and population, yes the black murder and violent crime rate is higher than this so no comparison on resisting reporting ppl failing to social distance.

And you are the same assholes who always say "they should have just followed the authoritarian rules" when you see cops or ICE abusing people.