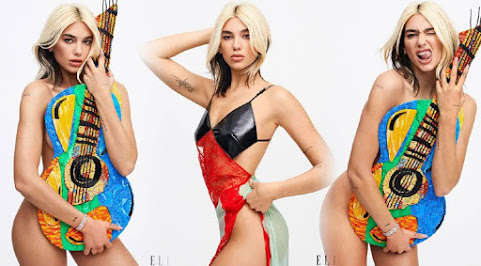 Quick round-up of pop culture, community news and info from across the nation and around the world . . .

Law enforcement say many drivers are not getting the message when it comes to slowing down on roads during the stay-at-home order."Speed is getting away from people," said Kansas City police Officer Doaa El-AshkarThe Kansas City Police Department released some of the tickets they have handed out recently."Because there's less

In the rush to feed children during the coronavirus pandemic, some area school districts have inadvertently put their nutrition staff and others at risk. Most cafeteria workers are voluntarily serving meals to students. They receive their regular salary, but it's not nearly enough to compensate them for jeopardizing their health.

She is currently locked down in a London Airbnb with her model beau Anwar Hadid. And Dua Lipa looked sensational in a new shoot for Elle Magazine, where she revealed she had been 'making the most' of extra time with Anwar as they self-isolate.

Sen. Elizabeth Warren has endorsed Joe Biden for president, marking a third day of high-profile endorsements for the former vice president, after Sen. Bernie Sanders and former President Barack Obama did the same earlier this week.


How to buy the new iPhone SE

Apple has announced the iPhone SE 2, its new semi-affordable phone that has the look of the iPhone 8 and a mix of specs from recent iPhones. The phone is available for preorder starting on April 17th, and it will release on April 24th.

The global tally for confirmed coronavirus cases surpassed 2 million on Wednesday, just four months after it was first detected in China. A tally kept by Johns Hopkins University placed the number of confirmed COVID-19 cases at 2,000,984 worldwide, with at least 128,071 deaths. More than half a million people worldwide have recovered.

The fallout from the coronavirus is shaking up the U.S.-China relationship on Capitol Hill, as a group of hawkish lawmakers fiercely criticize Beijing's response to the disease. Republicans are pushing for their colleagues and the Trump administration to take a more aggressive stance toward Beijing, which they say downplayed the virus's danger.

GARDNER, KS (KCTV) - With millions of Americans laid off or working limited hours, paying the bills is becoming a problem. But one Kansas town is stepping in to help their citizens. Things are moving pretty slowly in downtown Gardner. One of the few businesses still humming is Kenneth Huggins' Auto Shop.


Where the Chiefs roster stands as we approach the NFL Draft

Hide Transcript Show Transcript FAN PAGE AT 10:00 THIS MORNING. 20'S ON THE MAP HERE. MARYVILLE AND TRENTON. SOUTH OF 136 HIGHWAY. WE ARE ABOVE FREEZING BARELY. 34 IN KC. YOU MIGHT FEEL A LITTLE COLDER WITH A SOUTH BREEZE THIS MORNING. ON THE FIRST ALERT DAY PLANNER, SUNSHINE THIS MORNING WITH PASSING CLOUDS AT LUNCHTIME.

Senator Warren should be Vice President!

Why, is it her turn?

A Missouri man who investigators say was planning to bomb a Kansas City-area hospital was distressed by the government’s response to the coronavirus crisis and motivated by racial, religious and anti-government animus, according to newly unsealed court documents.

More Biden backers Now that's funny, Obama who proved to hate this country but won't leave, a women who thinks she can fool people by saying she's an Indian, and a couple of drunk lushes Hillary and Pelosi, one craps her pants and the other sucks her dentures, and not to forget Sanders who thinks he's still a hippie and wants to do AOC. Perfect.

You spelled my name wrong, retard.

Why don't you use your laser focus on Der Fuhrer?

Are all Trumptards schizophrenic?

Let's see. Someone who lies about ethnicity. Someone who can't control bodily functions. Someone who thinks they're much more attractive than they are. Are you sure you want to go there?