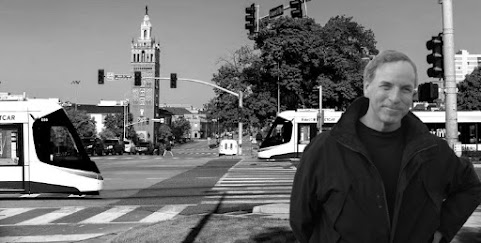 In a thoughtful treatise regarding an issue that has been overlooked in Kansas City; Jack Cashill explains his criticism of  "density" as he snubs the conventional wisdom of urban planners.

Building "density" in downtown Kansas City has been one of the primary goals touted by developers for more than a decade. But now, coronavirus has put the benefits of that objective in serious doubt. As Americans wait for a return to normalcy that's unlikely to come without a COVID-19 vaccine, the logic of crowding people together for economic and cultural benefit has unraveled.

CORONAVIRUS HAS KILLED THE MYTH OF URBAN DENSITY AND CROWDED PUBLIC TRANSIT AS A BENEFIT TO THE PUBLIC!!!

At the very least, a challenge to the density dogma in KCMO from this right wing thinker is worthy of consideration:

"What makes the Kansas City metro livable in no small part is that it has more freeway miles per capita than any city of size in the world. I have never had to take public transportation anywhere.

"I have always thought "space" an asset. It keeps our home prices down, shortens commute time and makes us "nice." At some urban planning sessions, however, I have been actually hissed for bragging about our freeway miles.

"The meanest hate mail I get locally is when I criticize the city's newest and stupidest shiny object, one that causes more traffic problems than it solves: light rail."

And then . . . The money line offers an alternative take on the pandemic and the conditions that caused it to thrive in many parts of the nation:

"You don't have to be an epidemiologist to figure out what is causing Americans to die from COVID-19. More than half the deaths have been in New York and New Jersey.

"When I look at the maps, I can see the grim reaper following the commuter lines out of Manhattan. I don't blame New Yorkers for their plight. They have been stuck with their transit limitations for a century or more. There was no real way out for them other than to move away.

"What I do not understand is why any sane person would want to mimic that model. In all the planning sessions I have attended, no one once mentioned the possibility that a pandemic could render public transportation unusable.

"The good Dr. Fauci should have seen this coming. He attended my high school. He rode the same subway. It was as crowded and as germ-ridden when he took it as when I did some years later."

Kansas City will likely maintain many social distancing measures even after the stay at home order expires. Some public transit precautions will also remain in place. The "new normal" no longer includes a mindless adherence to the benefits of "density" but will now manifest in an environment wherein the rules of etiquette demand some level of physical seperation among conscientious residents.

Check the links from many sides of the debate:

Fortune: After coronavirus, we need to rethink densely populated cities

Vice: Coronavirus Is Not a Good Reason to Abandon Cities

Biz Insider: An MIT economist recently posited that the city's subway system was the main trigger for the outbreak, but schools and crowded housing complexes could also be to blame.

Streetsblog: No, Cars Did Not Save California from the Worst of Coronavirus

CityLab: Density is a factor in this pandemic, as it has been in previous ones. The very same clustering of people that makes our great cities more innovative and productive also makes them, and us, vulnerable to infectious disease.

Westworld: Avoid the Next Coronavirus, Don't Be Dense, Denver

AD: Health and Disease Have Always Shaped Our Cities. What Will Be the Impact of COVID-19?

All this is a good theory but it won't keep the creeps of your back at the grocery store.

All these green environmentalists have been preaching the benefits of high density high rise apartment living and our urban planners and city leaders have bought it and subsidized it to our peril.

Oh Fauci saw it coming. In public health we all saw it coming and couldn't figure out why we didn't mount a response the way we had before. Incompetence. And when we get through this, we will still be faced with a planet that is becoming less inhabitable by humans every day. One day maybe we can have leadership that can walk and chew gum at the same time. I would love to hear Mr. Cashill's thoughts about alternative paths forward if he has any.

Any person with an IQ over 65 knows there are few benefits of a bunch of monkeys living in a Urban jungle. Our crime rate proves that, we didn't need any research to prove it. As Congestion goes up, problems go up- Statistics 101.

It isn't so much the density that is the problem, it's the diversity. In any urban area, there are many blacks and homosexuals that spread the disease.

Since your IQ is minus 65 what do know?? You need a way to make up for your little dick I understand.

Now let's talk about extending the toy train to UMKC!

The Black Death hit densely populated areas in the 14th Century, and yet cities are even larger now. Weird.

Are you the same person last week demanding you right to fester in the church of your choice?

A middle- to upper-class white man who doesn't take, doesn't like and even disdains public transportation.

That's shocking right there, I tell you what.

And to come from open-minded, Right Wing, conservative Jack Cashill??

Thank you Tony for getting me some exposure, I sure as hell need it!
The Deep State has made sure my last two books didn't sell well, and cash is pretty damn short right now.
To give you an example of how well the conspiracy against me is working, the last time I looked my last book was trailing behind something titled "Cooking With Dogshit"! What a humiliation!

Yes well MoRage we can't all be morons like you and Byron. But lets be clear here, do you use/take public transportation everyday? That's okay I already know the answer to that one.

What's the deal between Mo Rage and Byron? Something going on?

Maybe your next best seller could evaluate the fact that the airplane transit that you use constantly is more crowded than busses you are so proud to disdain?

OK, talk about them. No doubt you think you've made a point, now tell us what it was.

It hit the few densely populated areas that existed at that time (London, Paris, some Italian cities) but it also hit rural areas, where nine tenths of the population lived.

Airplanes are germ incubators, not doubt. But they do offer purified air above each seat. Turn it on when you sit down so you won't be breathing other passengers' exhales the whole trip. Buses have no equivalent.

"Buses have no equivalent."

Kansas City political leadership, past and present, manifested their Midwestern personal insecurities by desperately seeking to emulate their bicoastal idols. Sly James and the bowtie crew, junketing off to NYC or Portland in search of the golden fleece, only to return home and fleece the taxpayer with consultant-fueled pie-in-the-sky dream projects.

With Barnes it was the abandonment of Kemper Arena for the Sprint Center, and guaranteeing the Cordish Company's Power and Light District financial folly.

Now we have Quinton "Born A Poor Black Child" Lucas whose kneejerk reaction in every situation is to pose for a selfie and call the national media to offer self-congratulatory quotes. Without a federal bailout, KCMO is broke, so Quinton better hope that his paymasters are holding that racial diversity position for him at KU.

No shit only an elitist twit would claim that airplanes are inherently less dangerous than busses.

They are lovers didn't you know that?

Since I refuse to ride in either germ infested mode of transportation it's probably one of the reasons I stay as healthy as I do while not getting colds or flu.

New York City is dense with mass transit because it's a necessity.
Some folks in KCMO talk about density and "transit" because they're wannabes.
Playing make-believe in flyover country.
On the taxpayers' dime.

Does Trumpy expect to be taken seriously? When you get caught saying something stupid you will just say it was fake, which it is:
'Lysol injection was just a sarcastic lie I told to see if anyone is stupid enough to believe me'
Don't worry Trumpy everyone knows now you are a fake.

IN SWEDEN THEY LIVE PACKED IN OIL LIKE SARDINES AND EVERYBODY'S FINE.

1:34, first, buses' windows are rarely open. It interferes with their heating and cooling systems. Second, when they are open, they do not let in purified air like airplanes' air filtration systems do.

A "Maroon" with enough of a sense of smell left (not with a coked-out nose like yours) to notice the stench of unburned fuel permeating the passenger cabin to about 20k feet, only to be replaced by the reek of toilet chemical from that cesspit across from the galley where your snacks and drinks are prepared.

Yes, and the asswipe who keeps attacking both of them here was dumped by each one of them at one time or another.

Oh so you must be one of the lovers who was pushed away. Come on we know it was you who said that and then made your above statement when you didn't get the attention you were so craving.

A conspiracy against you, Mr. Cashill?

First, no one cares for your opinion except other Right Wingers and second, far too many of us know better and are educated. We simply disagree with your, again, Right Wing, kneejerk reactions and opinions.

I say again, A very white, middle- to upper-class white man who doesn't take, doesn't like and even disdains public transportation.

That's some stunning right there.

Thank goodness you wrote that down for posterity.

But thanks for asking. :)