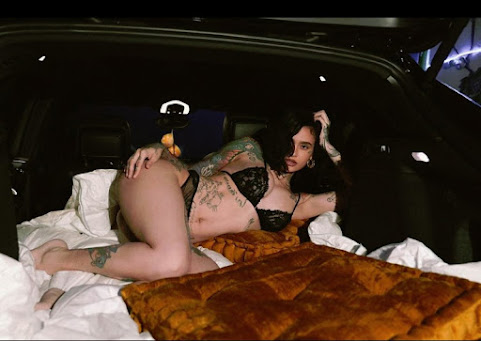 Pop star hottie Kehlani and her big booty lingerie branding inspire this morning peek at pop culture, community news and info from across the nation and around the world . . .

With stay-at-home orders in place for more than a month now, crisis lines are seeing an increase in calls. Some relationships are feeling the strain as people spend so much time together.Mental health experts encourage people to reach out for support because the stress we're feeling now won't just go away.There are layers of stress building in many households right now.


Jackson County begins preparations for reopening on May 15

KANSAS CITY, Mo. - Jackson County, Missouri, officials are starting to plan for the county to reopen in mid-May. At a county legislature meeting on Monday, it was announced that the county's health department is organizing a group "to develop a regional plan so that Jackson, Wyandotte, and Johnson Counties and the City of Kansas City will use the same standards to reopen."

OVERLAND PARK, KS (KCTV) - Frustration has turned to relief for some Johnson County business owners as a task force wrangles over a plan for phasing in what businesses can re-open and in what order.

KANSAS CITY, Mo. - Employees will return to work next week as some businesses prepare to open, but the number of customers they'll see is still up in the air. Experts told 41 Action News while they can't generalize the response among all consumers, they're expecting many to use the wait-and-see approach.


Victoria's Secret May Need Rihanna's Help To Get Off Life Support

President Donald Trump is looking to the business executives of America to get him out of the coronavirus penalty box. With the U.S. economy stuck in a deep downturn, Trump is betting on his promotional skills - of corporate executives, small-business owners and American workers - to rescue his standing just six months before the general election.

House Speaker Nancy Pelosi announced Tuesday that the House of Representatives would not reconvene in May, as she had said it would on Monday, the Associated Press reports. The backtrack came as a result of warnings from House attending physician Dr. Brian Monahan to Majority Leader Steny Hoyer that gathering the 435 voting members and their staff posed an increased risk of coronavirus infection.


Dr. Anthony Fauci warns US could 'be in for a bad fall' if coronavirus treatments don't work

The United States "could be in for a bad fall" if researchers don't find an effective treatment to fight the coronavirus by then, White House health advisor Dr. Anthony Fauci said Tuesday. The virus will certainly make a come back in the U.S.


The largest Arctic ozone hole ever recorded is now closed

Just as suddenly as it first formed, a record-breaking has healed. The largest ozone hole to ever open up over the Arctic is now closed, after first opening up earlier this spring. Scientists monitoring the "unprecedented" hole at the Copernicus Atmospheric Monitoring Service ( CAMS) announced the closure last week.

No Comeback For China???


China's Factories Are Back. Its Consumers Aren't.

The manufacturing giant is once again turning out steel and cellphones. But job losses and pay cuts have left its people reluctant to spend - a problem the U.S. and Europe may soon face, too.

Broncos, Raiders, Chargers add speed to try to catch Chiefs | USA Today "Every move and signing we make we have to have them in mind," Chargers coach Anthony Lynn said of the Chiefs, who have ruled the division since 2016 and used a 21-0 burst over the final six minutes to beat San Francisco in the Super Bowl.

Strong storms will rapidly move out of our area this evening as blustery northwest winds work in behind the cold front. There is still a chance for a few lingering showers during the evening followed by partially clearing skies overnight.

lots of junk in that trunk.

Communist China Government Factories are back open after killing hundreds of thousands and DUMB as Fuck AMERICANS will be in line to buy all their products as if nothing happened. That is the real Headline.

That's not a headline, that's just stupid boomer crazy talk that nobody wants to hear. So desperate for attention that you have to post that bull on a blog. Sad.

@7:19and @7:51 (same guy)
We see you're back to tying to boost your own feeble posts again.
Do you honestly think you've ever fooled anybody?
Now post one of your usual denials, we're waiting.

^^and yet I posted at 7:51AM and am not the same person as 7:19AM Weird. You got knocked out...deal with the fact that everybody on here thinks you're pretty fucking dumb.

Thank you for the eternal denials, you just proved my point.
Your little game failed years ago, and now you're just making a laughingstock of yourself.

Things probably will be slow until after the early part of November, but then the week-long party celebrating Trump's defeat will provide a huge boost, and the next month will still be fairly good, because his few remaining supporters will still be crying in their beers.

So how is the Jackson County Courthouse reopening with just two functioning elevators? Are people still going to be packed together in those germ traps? Is the county going to supply staff with the PPE? Wouldn't that cut into the supplies medical staff might be needing?

@8:50AM and yet you're still pretty fucking dumb, and I STILL didn't write the other post. Weird. Too easy.

7:19, you should learn to read sometime. The US Government consensus is now that the virus originated in the Wuhan bioweapons lab.

How are your diapers, Chimpster?

Not really, Chimpy. Be funnier! Remember your job is to entertain with monkeyshines!

Chimpy's skull caving in from the nonstop beatings! Poor Chimpy.

Chimpy just keeps getting knocked the fuck out!

Every post, every day, far too dumb to realize it.

and yet chimpy is the best thing on here by far, as evidenced by all his fans. Weird.

^^^^^^Most of what you see posted above is why we will never have anything nice here in Kansas City. It also proves to the rest of the country the facts that our city has way to many idiots running it and living in it.

The Judge should be held responsible.

^^^ criminally responsible. You can bet THEY will be protected.

^^It's all for devoted fans like you. Thanks for all of your support.

The US people consensus is the however it originated is really just Trump's excuse for ignoring the warnings for months and then executing every possible kind of incompetence.