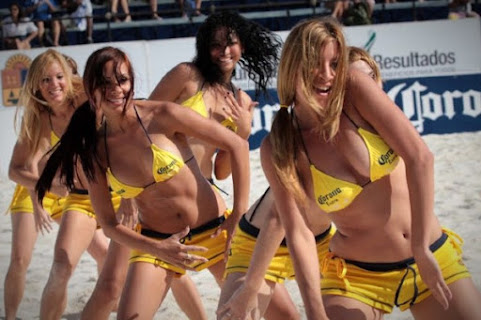 The "Corona Chicas" might not have been as talented as other promo babes but they hold a special place in our heart.


Remember that Corona beer suffered a negative association with the pandemic at its outset. But than more "enlightened" souls decried bad polling and claimed it simply represented Americans wanting to believe the worst about each other.

As always, that market had the last word as we link this update and a few more local links:

Grupo Modelo, which produces and exports several popular beer brands including Corona, Pacifica and Modelo, will be temporarily suspending production after its breweries were deemed non-essential by the Mexican government. BUSCH OFFERS FREE BEER FOR PEOPLE WILLING TO ADOPT A DOG DURING HEALTH CRISIS The company confirmed the news via a press release shared to Twitter early on Friday, and pledged its "total commitment" to slowing the spread of coronavirus.

KANSAS CITY, Mo. -- With the turn of the calendar to April many local business owners are hoping they are getting closer to being able to reopen their doors. But the new month has also meant some tough times for hundreds of area shops. Rent is now due.

The University of Kansas made a major announcement regarding its medical students Friday morning. Students studying to be doctors who have completed all or most of their courses, and who have been matched with a hospital for residency, will be allowed to volunteer graduate early.

KANSAS CITY, Mo. - For Sporting Kansas City manager Peter Vermes, a people person, this quarantine doesn't exactly fit. "I'm a face-to-face type of person," Vermes said Thursday via conference call. "So, the fact that you have to do everything by phone or Zoom conference calls, that part is a little difficult."

KANSAS CITY, Mo. -- There are some new kids on the block at the zoo, and officials are asking for help from the public in naming them. The Kansas City Zoo announced five new Arapawa goats were born and are bouncing around the Billy Goats Gruff yard.

Most thought the Kansas City Chiefs would be fortunate to have either wide receiver Demarcus Robinson or wide receiver Sammy Watkins on their roster this season. Instead, both are returning to the defending Super Bowl champions, meaning the Chiefs will retain their four leading wide receivers: Tyreek Hill, Watkins, Mecole Hardman and Robinson.

wait. Good morning. I'm meteorologist Katie Horner. We are going to do a Facebook live classroom. We are live in the K N B C studios. Right now, we apologize for our delayed start. We're having problems with my microphone, and if by chance it should go out, we will stop for a moment and reset with a different microphone.

Corona beer is okay but a little over rated IMHO.

Lousy day. Not seeing the usual joggling breasts in t-shirts and camel toes in yoga pants getting their daily run in today with this weather.

That is a really Gay picture of those Chiefs players bumping dicks.