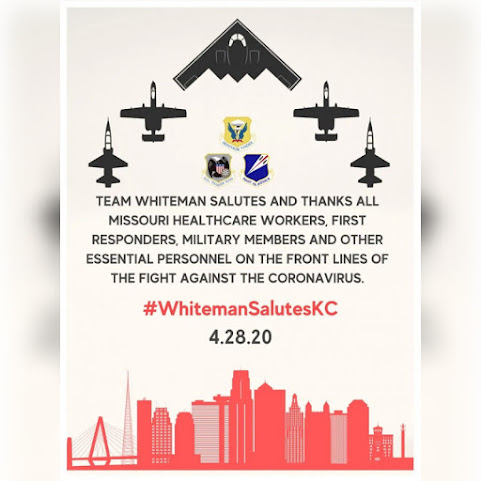 This presser explains the tribute but, acknowledging that patriotism is a wonderful thing, it's unclear if the flying death machine salute to ground level workers saving lives sends the right message . . . Maybe a money drop or desperately needed PPE supply dump might be more appropriate.

Again, here's the promotional notice of the spectacle that will offer a captivating and hopefully inspiring sight nevertheless . . .

LST: WHITEMAN AIR FORCE BASE, Mo. – Whiteman Air Force Base pilots are scheduled to fly over medical facilities in Kansas City, Missouri, April 28 to honor and express Team Whiteman’s gratitude for all medical and healthcare professionals, essential employees and volunteers in the fight against COVID-19.

Only agree that this will be a sight to see.

And yes, it will be inspiring.

I hope they don't drop boombs on the hospitals this time.

Trump can't get enough of his military parades.

A more effective policy would be to ground the planes and spend the money on PPE for the workers.

Also, reminds everyone not to get stupid.

Look at the Nazi piece of horse shit threatening to drop bombs on the people.

Because we can spend trillions on bombs but can't make enough dust masks.

Q: How come there aren't any Black pilots in the Air Force?


Answer: a) They don't allow 19" rims on a B2 bomber.
b) Grape drank isn't approved for any cockpit.
c) You need a college degree and no felony convictions.

TKC would be less funny if it were anti-mullet.

You mean Byron and MoRage?

Why doesnt the National Guards just drive army tanks by the hospitals and fire blanks? It would be cheaper. Why cause pilots are bored and want to fly, its about them, not us.

Obviously, you did not know Gen. Daniel "Chappie" James, Jr. Suggest you google him. Look up Gen. Bernard P. Randolph also, although he was not a fighter pilot.

I'm not in that generation, so, no I wasn't familiar with them. I was making a joke based upon racial stereotypes, similar to how I poke fun at Indians, Asians, Hillbillies, Irish, Polish, Blondes, Fatties, Druggies, and myself.
You made your point matter-of-factly, without calling me a Nazi KKK White Nationalist (I'm none of those) so you get this one for a win.