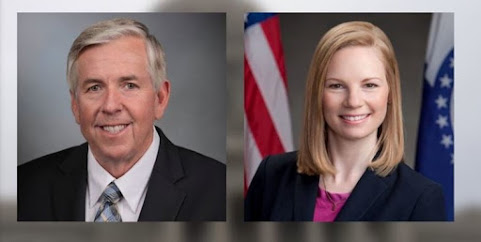 The "Galloway for Guv" campaign is running a campaign promo disguised as a petition calling out Missouri Guv Parson for his pandemic response.

Here's the latest email blast and the election 2020 argument from Jackson County supporters . . .

Voting Is a Right; It Shouldn't Be a Risk

Every Missourian should be able to vote. This value isn’t partisan and has nothing to do with politics.

Voters should have their voice heard at the ballot box without fear of getting sick from the coronavirus.

Our entire nation saw what happened in Wisconsin this past week. Most polling places were forced to close down and voters in Milwaukee were packed into only 5 polling locations on Election Day. The National Guard had to staff the polling stations and they, along with voters, put their lives on the line so that an election could take place.

It doesn’t have to be like this. Missourians deserve the ability to safely cast their ballot even during this unprecedented pandemic. We have multiple elections coming up.

The Republican government in Missouri has continuously passed the buck on voting access: Governor Parson, after saying that voting access was a partisan issue, later passed it down to the Secretary of State. Ashcroft passed it down to the legislature and local authorities. Local boards have asked for direction from the state. Auditor and candidate for Governor Nicole Galloway has been on the side of the majority when it comes to ballot access and safety since the beginning of the crisis: citizens shouldn't have to risk their own health or the safety of others to get to vote. Let's make sure that opinion is heard by Parson so we can get no excuse absentee and early voting.
###########

Galloway has been involved in corruption. So the Galloway campaigners need to point fingers back at themselves. The democrats are using scare tactics to get mail in ballots over voting in person because that is the only way they can cheat and win. Don't fall for it. We all saw how the republican ballots were thrown in the trash down in Florida.

The impeachment "trial" showcased their corruption.

God, you are an absolute idiot. Good luck with that.

So democrats want to expand voter fraud and ballot stuffing. No surprise there

If all these citizens can leisurely shop at WalMart and Menards then they can get out and vote 6 months from now...smh

Byron Funkhouser is walking talking proof of the mental health conditions in this country. He so belongs in the cuckoo's nest.

Expand? You got any proof there is ANY Chief?

Always something with you weirdos.

How come it seems to work just fine in other states, WA, OR, CO....why can't it work in KS or MO?

It's fucking call an absentee ballot. If you cannot make it to the polling place...request one. If not shut up and vote like everyone else

As George Washington Galloway remarked back in 1776, American Colonists should be able to declare independence from Great Britain without the danger of being shot or suffering any hardship.

1050. Ill let that go. You sound like you just got of high School and have no idea how politics have been done for decades

Jackson County Dems are the dumbest and most corrupt class of partisans in the US. This trait has gone back a hundred years...includes everyone who worked for cleaver, sly, that lady mayor, cleaver, quin, pendergast, petersucker-baker, and the list goes on. Its not news that they bust the guv for doing his job in a legal and patriotic way. These fucks just want an easier path to voter fraud.

So, you have no proof. Got it. Are you really Kris Kobach? Just come clean weirdo.

Right, so why not just make absentee ballots the standard? Is there some nobility in leaving work, getting in your car and driving over to vote when there's a perfectly good alternative available?

Wait a minute, Democrats were screaming Russian voter interference in 2016 and now they want folks to vote electronically?

Didn' t Hillary Clinton electronically give all state intelligence via the States Department server being illegally in her personal residence?

So the Democrats closed all churches and now they are going to close the voting polls?

Commumists taking away our constitutional rights!

I' m sure the Democrats will leave abortion clinics open to murder babies.