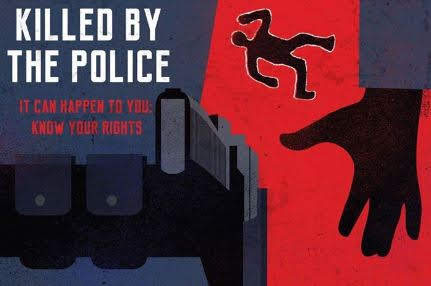 A two part conversation about the impact of officer-involved shootings has sparked renewed interest in police local control . . . Which is really more accurately described as Council control.

Here's a look the upcoming discussion . . .

Killed By Police: It Can Happen to You

A word from insiders:

"TKC, just wanted to let you know about a great opportunity to learn more about how the community is responding to the ongoing injustice of police killing residents. The first meeting was standing room only and the consensus is that local control might not reduce the homicide rate but it will certainly make police more accountable when people of color are killed. To date there hasn't been any independent review of many of these cases and local control is the only way to assure that voters have a voice when deadly force is called into question."

Local control as a way to reduce the number of officer-involved deadly shootings is a controversial but effective rhetorical strategy given the dearth of officers found guilty of any wrongdoing following deadly altercations. Grieving families also join the advocacy with raw emotion that overpowers most municipal concerns.

Accordingly, the push for local control continues to move forward and now fatalities following officer-involved shootings are memorialized as martyrs to achieve this political goal.

This is a bad idea all around.

Handing over KCPD to the council will be the END of Kansas City, MO and a decent into chaos.

You mean we're not there already?

This is just silly. The people ON the police board are locals.This is not the problem.

It's young black men who use guns to settle rivalries or react to perceived injustices. An out of control culture, of undereducated people without morals or common sense or respect for others. Or a connection to Spirit.

The police are not the problem.

If you get shot by the police the odds are largely in their favor that your dumb ass DESRVED IT.

I need to see the stats about all these police shootings, this is just more blacks blaming everybody else for their stupidity, my god man, does anybody hold the koloreds responsible for anything anymore?

No wonder dimwit run shitties are so fucking worthless.

Liberal bullshit. First, Kansas City doesn’t have a police killing minorities problem. A handful of people over several decades does not create a problem. Should those cases exist... no but shit happens. Second, local control of the police won’t make a bit of difference. All of the other states with real police problem implications have local control of their police department. Whoever your dumbassed tipster is probably also believes that building police stations and throwing people out of homes they occupy to erect these buildings, solve crime. As is evidenced by the recent crime surge - that hasn’t done any good for anything. And the same is true of local control. Local control will make the police a more corrupt and political organization - neither is needed or desired.

Replace the word POLICE with the word BLACK, now you got a more correct story...have a delightful day... kc..

I couldn’t care less how many hood rats get killed by the police. More would be good.

Fix the potholes.
Then we will discuss local control of police.

Let KC Tenants manage the police force. The criminals will run from the lunatics. Just a few selfies shy of normalcy.

Actually, anything our local government takes control of will get worse, much worse. Has anyone noticed that our effeminate mayor has had everything given to him his whole life. Our mayor is an incompetent liar, same as the mayor before him?

The City of Kansas City wants control over the police so the city will have control over the budget, literally. Killings or no killings the police department is "killing" the city with the cash register effect. The basics of the city cannot be met with the never ending drain by the public service entities. Even the fire department babbles on about how the fire trucks wouldn't leave the station if not for Price Chopper and ambulance runs, neither of which require a fire truck or fire personnel.

Good luck recruiting officers after that.

Yea, wingers talk from both sides of the mouth.

Odds are Nazi scum need a swastika carving in the forehead. You can just walk in at the Nazi Bod Mod shop at 1700 College Ave.

1:37 is 100% correct, the police budget is out of control because they have the most highest paid people working for them, it’s true, they need to be brought back down to earth by controlling the payroll and ridiculous pensions

The pro-lynching agenda can shut up now.

Sure, don't try stopping the lynchings.

We don't need the bad ones.

The City covers,over Ninety miles North South East and West. You add more it may make a difference of 1 percent. Most of the Crime is about anger drug teritory disputes mental problem's. HOW can you have a cop in every dwelling. And there are 80 million people on syco Perscribed drugs in the U.S.AND ANOTHER 80 million that needs help. The national guard can't stop this.

Once our City Government does a good job running the City, we can broach the subject of local police control. Until then...

What you going put a cop in every apartment, house and car that has a black and a gun in it ? Lol

Watch the video of the attack on the NYC Girl by a mob of people a couple days ago. Then ask yourself why we blame the police. Plan ass it's how MANY Blacks choose to behave. Stop the excuses for their stupid and evil behavior.

I fought the law and the law won !

Lynching is a funny subject. How many non Blacks were lynched ? Seems you jump on the side of the most drama for Unicorn diversions.

The city wants the Police pension fund. Its solvent. The cities isn't.