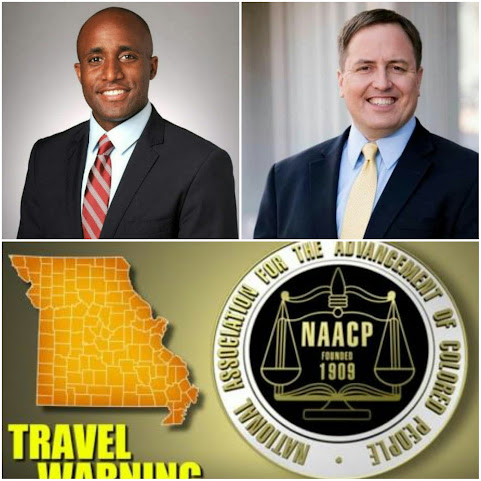 Kansas City news has been keeping strangely quiet about the aftermath of this week's biggest political ruckus that resonated across the state and the nation.

Here's the aftermath of the primary vote hot mess . . .

"The Missouri NAACP on Friday called for the state’s top election official to step down in part over his criticism of the Kansas City mayor, who complained about issues voting during this week’s presidential primary.

"Kansas City Mayor Quinton Lucas, who is black, on Tuesday struggled to vote after a poll worker mistakenly switched his first and last names while searching for him in the voter rolls. After Lucas took to Twitter to raise issues with his experience voting, Republican Secretary of State Jay Ashcroft, who is white, criticized Lucas. Ashcroft said Lucas threw a well-meaning poll worker under the bus and that he could have voted if he wanted to but declined two efforts to resolve the problem at that time.

“He’s saying things that are not true,” Ashcroft said. “And what he is leading voters in Kansas City to believe is that if they’re an individual of color, they may not be allowed to vote. And that is abominable.”

Missouri NAACP President Rod Chapel said Ashcroft’s comment that Lucas could have voted if he wanted to “fits into a racial narrative that has been used in Missouri for a very long time and one that the NAACP is still fighting against.”

“When we raise a concern about not being able to fulfill one of our constitutional obligations as a citizen,” Chapel said, “we ought to be taken seriously and not chastised, and certainly not chastised in the way that Secretary Ashcroft did to the mayor.”

From there the argument escalated quickly with the Missouri SecState doubling down on his criticism and pointing out alleged "false statements" from the KCMO mayor. Meanwhile, many activists claimed the comments seemed "personal" as nationwide reporting nearly earned as much coverage as the 2017 Missouri NAACP travel warning that called out the entire state over alleged racism.

What might be the most important fact about this kerfuffle is that the Mayor was later allowed to vote and there was actually no problem with his registration or documentation only a poll worker who made a mistake that resulted in nationwide headlines and continued hard feelings along partisan and racial lines.

Ashcroft only said what a of people in Kansas City were thinking. He has a right to his opinion and shouldn't have his job threatened because of it.

Feel bad for the poll worker here. Sounds like a very innocent mistake.

Voting has been a mess in Missouri for a long time. There needs to be some real reform here in how our ballots are counted and collected. We've been promised modernization for years but all of the polling places seem extremely antiquated. That should be the biggest complaint against Secretary Ashcroft.

Why should anybody wait to get the situation resolved, take a provisional ballot or just talk to the manager for a second when they can get coverage in the New York Times for just a small delay. The negative reinforcement is just to strong to avoid. People are being too greatly rewarded for doing the wrong thing.


Everyone is going to make a big deal out of this and use the voter suppression issue. I personally think Lucas is a racist actually most black people are racist.

The fact is, we shouldn’t be allowing black people to vote.

So the mayor refused the offer of a provisional ballot? And instead made a big stink...? To grab a headline?

He knew his provisional ballot WOULD be counted, and the situation rectified.

The politicization of every stinking thing. Creating an Us vs Them. That's not healing, it is divisive. But of course the Democrats are desperate for headlines. As is the NY Times. Any day they can get Joe Biden off the front page helps them.

I agree with 750, the poll worker made an honest mistake and the mayor probably had a bruised ego that he wasn’t immediately recognized and accommodated. Unfortunate all the way around, but no reason for anyone to be fired or asked to resign.

The NCAAP is a joke. So it the likes of Freedom Inc. and their handlers. Year after year - they tell Black people to vote for these jokers and then complain that they said or did something offensive. Matt Blunt’s daddy is still in office - largely because these groups endorsed him and he doesn’t mean Black people any good. These White people get the Black vote and do what they will with their appointments. They are never held accountable. As long as you pay the “Black leaders” (racist af) then these White politicians will continue as they have always in the interest of themselves and their White constituents.

Gee, Tracey, and here I thought you lived on the west side of State Line, over there in Paradise!

Guess not, or else you wouldn't be posting on something that's none of your damn business!

NAACP needs to call for resignation of awful city mayors, the hustlin' 'black leaders of tomorrow' who can't get anything done except for advance their own careers.

Lucas planned media blitz is backfiring. Trust me I know this was all a done to gain him national media attention.

bickering, while not leading on coronavirus.

10:11 Don't bring Trump and the Senate into this thread!

I'm Joe Biden and I forgot this message.

Lucas should resign! He has already failed.

I’m Dementia Donnie and I pissed myself.

And the naacp should be mad at Lucas for ignoring their ban blacks from Missouri, amiright!

10:15, yeah, the lack of leadership everywhere is appalling.

governor cuomo in new york seems to be pro-active

I’m Dementia Donnie and this virus is a hoax, er it’s contained, er one day it will vanish, er it will die when it’s warm, er we only have 15 cases soon going to zero, er I’ve pissed myself.

Just wondering HOW the Poll Worker does not know not who the Mayor of KC is...? THAT might be a BIG part of the problem. Somebody's EGO was bruised and now he's punishing the Worker.. How does he not tell her even laughingly....WHO HE IS....? The VOTERS of KC gave him A HUGE BREAK with his little alcohol problem
and he should have extended the same BREAK to the Poll Worker.

"A person who is nice to you, but not nice to the waiter, is not a nice person."

I demand that the NAACP resign from public life until they can stop race baiting. Racists.

Has anybody checked on Dementia Donnie today? He has a habit of wondering away.

Ashcroft is an Idiot. Was Lucas supposed to mind read the poll worker's mistake so he would know exactly how to solve the confusion? Lucas tried to clear it up but didn't magically know what the error was. It was a real problem and Ashcroft is an Idiot.

Nobody claimed to have any managerial authority and provisional ballots are bullshit. Lucas tried to solve the issue but system failed so being such an ass.

*so stop being such an ass*

It was just gay drama on Quintons part. Gays like to be the Center of drama.

^^^Seems like they’re the center of YOUR attention Nancy!!!!

One must be lead to believe that the motivations to deny Lucas the ballot was racial animus.

A more likely scenario is that the poll worker (likely an elderly person being paid a pittance) made a clerical error.

This is reason #1365 that we don't like politicians. Disingeniousness is their nature.

Only clowns like the NAACP could get their shorts in a knot over such a silly episode.
The last "big issue" for them was to advise black people not to come to Missouri because of racial profiling by the police.
Meanwhile, black-on-black homicides in the state's two largest cities continue to soar.
And not a peep from the NAACP.
Any new street-naming projects coming along?
What an upside-down joke!

I've literally never been to a poll where some smarmy old person didn't demand: "last name!" No please, no sir, no pleasantries. So when the old broad, not used to edgy black names, asked him the same question, how did he respond? Quentin? So yeah, no crap they couldn't find him. Wouldn't've mattered if he had his voter Id or DL to show them.