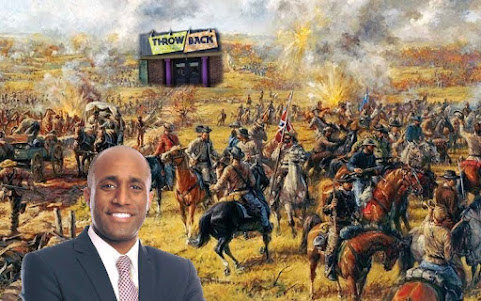 A spate of shooting erupted in Midtown Kansas City this weekend leaving nearly 100 shell casings on the street.

Today the Mayor invited mainstream newsies to hear a few more ideas on stopping the violence in the embattled Westport entertainment district.

Apparently the "drive" part of the drive-by is a bit easier to legislate.

- The "street vacation" could expand as autos might be forbidden from Westport streets and the perimeter on the weekends.

- Better management of closing times is billed as an effort to manage traffic rather than a way to more easily identify violent drunks. -

Check today's presser where the mayor leads with his weekend plans and to visit Midtown for dinner and a drink in order to reassure patrons:

NO, it will not work.

The only thing that will come close to working is to up the prices 200% in order to make sure the scumbags of all kinds can't afford it. Sorry.

No thanks, Gramps. A 200% price increase on your diapers sounds better.

It's interesting that smiley selfies Lucas referenced New York cleaning up Times Square as an effort to take into account as KCMO "addresses" its own very serious violence and crime problems.
Perhaps he didn't remember, or ever even know, that NYC introduced serious implementation of the "broken windows theory" of policing, which focused on arrests for "minor" infractions, and stop and frisk, which actually focused policing efforts on high-crime areas of the cities, not on ethnic groups.
He's right, though.
Those strategies really brought results.
Now do he and the other electeds have the guts to do the same?

Visit beautiful Kansas City! You might even see the mayor if you walk by the scene of one of our many mass shootings! Not exactly the best tourism slogan in the world but sad that it's mostly correct.

Talking to yourself again Chimpy? Lol


Ha Ha Ha Ha this guy Lucas is a clown. Tony is right, lets go after the cars to stop crime I guess that's the only thing to do since this mayor and the last one and the one before that have no clue. BTW... is Lucas going to be in the parade with his clown suit on? Ha Ha HA Ha Ha

Nothing will work until we acknowledge what the problem is. It’s real simple. No problem = no solution.

Did Mayor Selfie forget the City of Kansas City doesn't control the police? Too busy taking selfies to determine what he does or does not control?

Thats why Mayor Selfie is focused on filling potholes - so it's a smoother drive-by pop of the party crowd in wee-port.

Why complain? Legitimate form of birth control as long as Amish shoot Amish.

Continue your quest. Bernie has our backs.

The gay mayor blame once again ? Seems you could do more than worry about his love life- you old geezers.

No time to address the concerns of the city for Quinton Lucas; he is too busy harassing advocates on Twitter and Facebook. The Chief of Staff join in to bully the more persistent advocates and call people racist. Nothing wrong with a paid staff calling the constituents racists if the leadership is a gay black man, or so it would appear. Time enough for another selfies. Twitter and Facebook await.

Fact is that our NRA-owned rightwingnut GOP Legislature will not let us do anything about the "shoot" part of drive by shooting because it insists that no meaningful gun safety regulation be allowed -- even by the City.

This is worse than the Wild West. Back then no one was allowed to bring his gun into the city. Wild Bill, Wyatt and the marshals made their living taking guns away from fools who thought that guns and booze should mix.