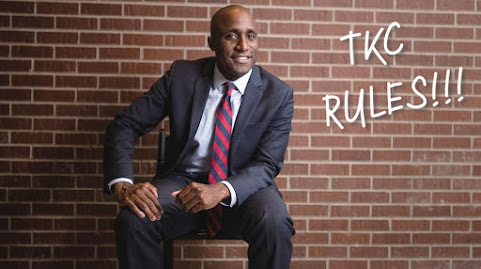 Today's bold gesture to fight against violence from the top elected official at City Hall . . .

The phone number is his to share so we blanked it out this post, but here's a screen cap of the statement in response to online advocacy and a link to the discussion: 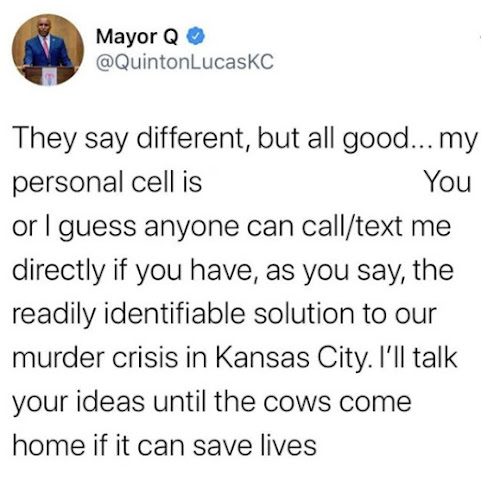 This is possibly a big deal given that Millennials don't like phone calls and rarely pick up. Heck, even TKC often apologizes to people because I constantly turn the sound off on my phone in order to get stuff done.

What REALISTIC ideas would you share with the Mayor???

It's really not that hard.

Hire more police. The should be the FIRST thing we look to fund in the budget.

Turn the inner city over to Raytown, they need the land and KC needs a break.

5:29 makes a good point. Start piecemealing land the surrounding communities. Keep all city services the same size. Then your city departments are fully staffed and the actually city is more manageable.

Keep Praising all the Illegal Drug users and Gangstas. Keep giving people Free Get out of Jail cards for multiple violent offenses. And keep the constant 24 / 7 Agenda of promoting the weakest and falling for the violation of racist civil rights excuses. You see a Mayor scared for his job instead of facing the facts.

Hell, that cell phone number has been on the toilet wall where I suck cock, for 2 years.

Some people dislike people that make money.. but the ones that do answer their phones.

@5:12 We don't need more police we need police working more efficiently. Where is the police chiefs personal number? What police officer that patrols your neighborhood do you have a number for?

Whats the odds Chuck, Dave or Tracy call him?

@5;16 Raising the level of officers to 1968 is ridiculous? The department needs to eliminate more specialty units and out those officers on the street first before any new officers are hired. Where did the horse unit officers go? The answer may surprise you but it wasn't patrolling the streets.

5:27 before running the blacks out as you say, maybe we should start by running out Jean Peters and the Judges who keep letting criminals off on probation.

@5:52 your homophobic attacks do nothing to bring solutions to the problem. Who cares if he gay? You will never be a mayor.

That number traces to a house at 4100 block of Wayne Ave. Google the number if you don't believe me.

Build a 4000 bed jail for Jackson County. Violent crime will go down.

Turn the Opus Apartments in Westport into a City Jail.

What REALISTIC ideas would you share with the Mayor???


Submit KCMO's bankruptcy paperwork so we can put the James era behind us and start from scratch.

Rather simple. Actually enforce 3 strikes and you re out. Since the majority of violent criminal acts are committed by the same people over and over.

6:11 is all upset because Pete the Butt Pirate just dropped out of the Presidential campaign. Better hide the razor blades and sleeping pills.

It’s his real number. He gave it out during his campaign. It’s a burner phone.

So are Homos committing all these Crimes ? I know the down low is acceptable for those people.

What a goddamned lie.

The violence in Westport mirrors the exact same violence all over America where the white and black tectonic plates in the racial fault line strain mightily against each other until the next predictable eruption.

More security, money, cops and good intentions are NOT the long sought after answers to this problem, which, admit it or not, is racial.

Progressives have, for decades, made bank at the ballot box by engineering a narrative that convinces black people that they can't make it in American society unless they embrace "victimhood" and the slavery of the 170 years now dead Antebellum South as the excuse for failure. That "failure" is the golden parachute that lets parents, teachers, politicians, 'community activists' and all SJW's off of the hook when lying to the black electorate about "Institutional Racism" and quoting poseur-phonies like Ta-Nehisi Coates in order to remain in power.

Employment in the "Racial Grievance Industry" one of the very best paying jobs in the country, while coming along with money, status and fame require zero effort in school, or, at any vocational on the job training program. You just have to wake up one day and decide to get pissed at WHITEY and then tell your black loser/ex-con buddies to spread the word, that the only reason they are not running General Electric is because of Slavery.

At this point armed with justified rage, blacks now roam the streets with forgiveness in advance for crimes, sins and misdemeanors by way of society's legal (Affirmative Action etc. etc.) and nebulous, blanket, umbrella of white guilt in the form of an acknowledged societal "PLENARY INDULGENCE". Black crime is forgiven in advance by way of the pretense that crime is not committed, it is "CAUSED" by the evils of White Devils.

The necrotic philosophy that kills, in this town, around 150 blacks a year in murders (I think they are under reported.) rapes, assaults, robberies, in just the inner city is the price that blacks pay, in their minds, in order to maintain political power. The bodies, stacked like firewood, exsanguinating into gutters is a grotesque indictment of the very 'leaders' who are still, after decades, more than willing to kill their own constituents in order to maintain power, money and sinecure.

After decades, there is metastatic growth into all levels of white and black thought that is probably now impossible to remove.

In the end, it is far easier to cast blame and expect recompense than it is to look the devil in the eye and know you are actually looking in the mirror.

Their will be no fall outside the walls of Damascus for black politicians who make a pretty good life off of hatred and calls for the usual penultimate calls for violence, as always just prior to the coda, calls for more money.

This is way too easy, way too predictable and there is still a lot of blood to suck out of the idiots who still think that "hope and change" are not, in the end, the sound of gunfire and the smell of cordite.

Wash, rinse, repeat -- we minorities need more of your money, because 1.5% of white families owned slaves 175 years ago.

To save future generations we need a one child on welfare only if mother accepts sterilization.
And, a three violent crime and out policy. As in the death penalty.
Both will help take the burden of raising America off the backs of the school systems and law enforcement.
Tough times demand tough choices.

^^ You are right. A very small percentage had slaves. Yet it is not considered racist for a minority to blame an entire race. Double standards on almost all issues these days. Just like it is only racist when a white kills a black, not when a black kills a white. I call a spade a spade.

Does anyone realize KC doesn't have a city jail? Does anyone realize that no matter how many arrests officers make there is no desire on behalf of prosecutors and judges to actually sentence anyone to incarceration? The answer to the mayor's question is really quite simple. For the most part, when someone murders another human being it isn't their first rodeo with the criminal justice system. The people committing assaults/robbery/armed criminal action today are going to graduate to repeating those crimes or taking it a step further to murder. Because largely there are no consequences. Until prosecutors and judges get on board with incarcerating people and until judges take the probations they are handing out like candy seriously and holding people accountable when they violate those probations nothing is going to get better. Criminals aren't entirely stupid and they know the difference in committing a crime in Platte County or Johnson County vs committing one in Jackson County or Wyandotte Co.

Come on chuck you already said this shit in the Westport thread.

Can you quit regurgitating your racist shit?

If diarrhea could physically vomit and then THAT regurgitation could take a shit, that would basically sum up what you're saying.

WTF does that even mean? It's so fucking stupid, I can't even get my head around it. White boys still rule this country. Look at the fucking Nazi in the WHITE House.

You hate blacks because you're a fucking coward. You were robbed once. Do you hate robbers? Do you hate men? No, like all racists you hate babies because they're the wrong color.

You like this blog because your racist tripe isn't fight for polite company. Your garbage would be deleted anywhere else.

^^^ Byron, your posts would also be deleted anywhere else. If you don't like this blog. Don't read it. But don't bitch about it constantly and then show up nearly hourly. You piece of garbage, you are the very worst kind of hypocrite. And no, I'm not conservative. I voted for Obama, I'm a classic liberal and I can't stand your constant bitching and moaning against everyone and every thing.

Unbelievably eloquent in truth 7:12. I can add nothing but my prayer and hope that they don't drag you away in chains to imprison you as part of the "new" reforms. The truth will get you in prison, while evil in today's America means you will lead.

If you saw his interview on the news early tonight he says maybe we should know more about the people who get shot and their associates to help prevent this stuff (I'm not quoting him, paraphrasing his words)

So I would ask how are the police going to do that, they have difficulty solving murders (because no one talks) and they don't have enough cops. And the audit shows they are over 100 cops short now.

This yes all of this! Crime pays in Kansas City. The rewards out weigh the costs! I’ve offered to tell him my personal story of how this had an impact on me and my family after being held at gunpoint in our home in July of 2018, the Jackson County Prosecuting Attorneys office did way worse to us then the men who robbed us. Neither the mayors office or her office will even meet with us to discuss it or try to make it better for other victims. They are a gang themselves and are misleading the public into thinking otherwise. Gaslighting at its finest.

Yes! But that doesn’t happen :)

Go ask him a question. He doesn't answer the question. He interrupts the conversation to take selfies. He has no answers to questions. He is terrified now that he has the job of mayor. Never in his wildest dreams did he imagine he would win. Now he doesn't have a clue what to do and he is terrified. He is paralyzed. The city can move no further. And he is still mad at Sly James and Jolie Justus, neither of which did anything but tell the truth about his lack of ability to tell the truth. Neither bothered digging up the skeletons; though both know where the skeletons are buried. Mayor Selfie isn't an honest person. He sold his soul to the devil to win the election and now his is running from the devil. What happens when the devil catches up with him?