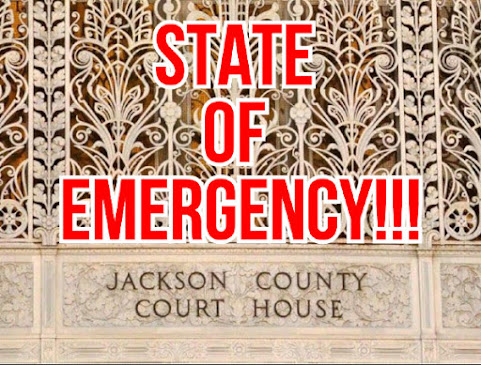 "The individual affected is said to be a man is his 70’s who had not recently traveled. The health department said they are working to identify any close contacts of the individual. Those that were exposed will be contacted by JACOHD as soon as possible. The individual is isolated appropriately.

“We encourage those in vulnerable populations, such as older adults and individuals with underlying illnesses, to take extra precautions during this time,” said Jackson County Health Department Director Bridgette Shaffer. “Practice social distancing, avoid crowds and travel, and stay home as much as possible.”

"a man is his 70’s who had not recently traveled."

WHAT A DIFFERENCE A DAY MAKES
https://www.youtube.com/watch?v=OmBxVfQTuvI

On Wednesday February 19th of this year, the SP500 (broad market) hit an all-time high of 3393.52 and President Trump was asking Americans, "are you tired of winning yet?"
News highlights for the day:
1) In China, the death toll from the coronavirus has surpassed 2,000 people, with more than 75,000 people infected worldwide.
2) Iran reports its first two cases of the virus. Hours later, it was announced both infected people have died.
3) Six Democratic presidential candidates will debate tonight in Nevada, only days before the state’s caucus Saturday. Tonight’s debate is the first time the former New York City mayor, billionaire Michael Bloomberg, will be on stage, although he is not on the ballot in Nevada.

How low will financial markets fall? For a clue to that question let's go directly to the Nostradamus-like cult which predicted a Coronavirus Global Pandemic (they even called it nCoV-19) way back in October 2019, before the world first heard news of a viral outbreak in Wuhan China.
https://www.youtube.com/watch?v=AoLw-Q8X174
If you watch the video before YouTube removes it, please note they're providing you a likely roadmap for what to expect, including: travel restrictions; just-in-time supply chains severely stressed; governments out of money; possible internet shutdowns; stock markets down 20 to 40-percent; economic turmoil lasting for years, perhaps a decade; 65 million deaths worldwide in 18 months. Keep this website handy for global mapping:
https://gisanddata.maps.arcgis.com/apps/opsdashboard/index.html#/bda7594740fd40299423467b48e9ecf6

The Coronavirus Relief legislation, quickly being passed without reading the details, will surpass $1 trillion dollars. And that's just the beginning. Is it too late to emphasize that this virus was originally a PUBLIC HEALTH infectious disease issue? When you witness a communicable viral disease, spread primarily via droplet (coughing/sneezing/hand transfer), starting on the opposite side of the globe and quickly spreading, do you think an appropriate emergency response would be to ramp up production of protective gear (24/7 manufacturing) and issue them to every American? Some of America's top public health/corporate/political leadership participated in the Event 201 Global Pandemic simulation in October 2019. Why do you think they didn't act?

Even today, I've watched officials at the White House, corporate leadership, the governors of MO/KS, local mayors, and health department officers, going about their business and conducting interviews without face masks or other basic protection. Sorry, but standing a few feet away from others might be of psychological benefit, but according to the science wizards at MIT…"coughing spreads droplets as far as six meters, and sneezing as much as eight meters. These droplets stay suspended in the air for up to 10 minutes." Gesundheit! (a meter is roughly a yardstick for us non-metric folks)
Here's the ever-helpful CNN (clearly sarcasm) informing the public: "(CNN)-The coronavirus driving the current pandemic can live on plastic and stainless steel surfaces for up to three days, researchers say in a study published as a letter to the editor in the New England Journal of Medicine." They wouldn't be trying to scare me senseless, would they?

Stay tuned for more musings, and possibly why this pandemic is a strategic play to maintain Western hegemony.

One question the Government, Media, Politicians and Experts won't ask

Fake News. It's already leveling out in China...BUT: the massive stock market drop will enable concerns with cash to swoop in and buy up controlling interests in dozens of corporations. Follow The Money.

The 100s or 1000s of other ppl locally that have it dont know it because their symptoms are mild. So like the flu an elderly person got it and got really sick.
If you are elderly or have a compromised immune system take care like you always should.
The panic is driven by the lining media and its owners. Be sure to stay glued to your tv while quarantine at home and watch the world burn.

And yet the Jackson County Courthouse in Independence is still admitting the public and conducting business as usual!

BERNIE said He was dealing with a FUCKING crisis. He must have Biden confusion that he is in power and making decisions . Decisions beyond trying to figure out why he has no chance in hell to show you empty shelves for the next 4 years.

The koloreds are scared to death they’re gonna get the Kung flu virus, there’s panic in the hood right now!

By the way, that’s what my kolored co-workers are calling it, Kung fu flu or Kung flu virus.