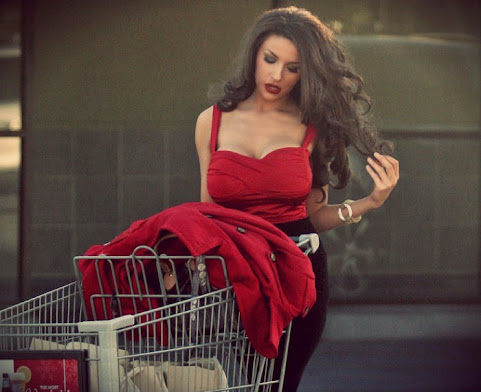 Meanwhile, the Commander-In-Chief hasn't had much impact over his "pals" on Wall Street:

CNN: Goldman Sachs warns US stocks could plunge another 16% before rapidly recovering

Vox: The Dow Jones had its biggest point drop in history Monday

And again, there are empty shelves in the toilet paper aisle but everything else seems normal . . . TKC even bought some paper towels. Two-ply for a pinch: Wink & pun intended.

Still that led us to this quote from our favorite tweet stars that has a dubious conclusion and this stich in other parts of the nation . . . Still worthy of consideration:

"Late-stage capitalism put under even the slightest stress looks exactly what capitalists claim socialism looks like . . . " 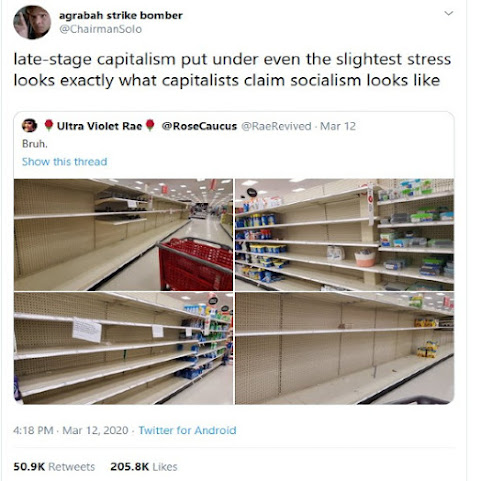 Again, this might have been the situation in the toilet paper aisle on Friday, for a lot of places, but for now grocery stores are TRYING to get back to normal in Kansas City.

Committed to survival, we bought an extra box of snack cakes with no hassle because TKC WANTS TO LIVE, BABY!!!

You can use a Kotex for many purposes.

Also noticed that stores were just fine. EXCEPT the toilet paper aisle.

The people buying the 500 rolls of toilet paper are the same ones saying one does not need 500 rounds of ammo.

Stores need to put limits on how much toilet paper people purchase. Because it's just insane the people think there's a toilet paper Supply shortage here. They're going off the stupid news from Hong Kong, which is an island and doesn't have its own production facilities for toilet paper. When I see is people just panicked and looking to reassure themselves. A lot of us fault goes to American culture in general but definitely from people who don't know how groceries get to the store. Stay calm stay well.

Any time you hear someone going on about 'late-stage capitalism' you know you're listening to a kook.

Why are the casinos open?

The stock market is shedding toilet paper panic dummies. Once they all sell off and ACTUALLY lose money the patient people will buy super low and cash in. Most of them will be gen X and the criticized boomers. Experience, it's golden!

So your mom can go get some business.

After tomorrow’s losses in the market, the stock market will be back to Obama’s level when he left office. All Trump’s gains will be gone. This is always what happens when you elect Republicans. They explode the deficit, wreck the economy and then get tossed out of office leaving the mess for the Democrats to clean up. MAGA! You rubes were fleeced again!


On Saturday, Meir Mazuz, an Israel-based Sephardic rabbi, said the coronavirus was divine retribution for gay Pride parades around the world.

"(The Pride march is) a parade against nature, and when someone goes against nature, the one who created nature takes revenge on him," the Israeli daily newspaper, Israel Hayom, reported Mazuz as saying.

Except Trump will have more time and the market will recover. Do you really think the market would power through this problem with a democratic president? Surely your not that naive kid!

Holy fuck. It's almost like there was a global disaster affecting the market or something.

Is your other brain cell available? No, best not to trouble it.

The herd appears headed for a stampede of epic proportions at some point.

So not so well in other words, right?

7:05 (#2): A Democratic president would not take credit for a bull market and boast that even if we hate him we have to vote for him because of our 401(k) plans. Hubris much?


The president is doing everything he can to lead America through this crisis, including calling for a National Day of Prayer yesterday

How did Democrats respond?

"F**k a National Day of Prayer"

Remind me again—who is dividing the country?

Trump will pull us through this mess, he’s the president for the people, the previous guy..... not so much

Could someone send the stable genius back to his stable. And get him some Depends?

If someone were to say yes or no, would you develop new material?

Liberal Logic:
On the dreadful Obama economy - “Bush did it.”
On the great Trump economy - “Obama did it.”
2 months into a global Pandemic with a stock market dive - “Trump definitely did it.”

Fox told me so.

Democrat Party - New York Mayor DeBlasio ran his mouth this morning in his contrived press-conference saying the government should "nationalize" the United States health provider companies (ladies and gentlemen that is what Communists do when they take over countries).

The markets sank like an anchor during his news conference. If the government were to nationalize the health and medical corporations; if the Democrats happen to regain power, shareholder and bondholder wealth is totally wiped out.

If you properly diversified your 401K, the stock portfolio should have a broad mixture of companies. Not just the huge international Dow components or even S&P 500 with mid caps. You should have a Russell 2000 Index that also includes small caps in every industry to represent the full economy. Value, growth, large, medium and small.

I'm sorry, your portfolio lost over 40% in the last 2 years. That's the full Trump record. Oops.

Also, with recent Fed rate cuts, your CDs and savings will be earning about 0% too. Sorry again.

AMAZON announces that it plans to hire 100,000 additional employees to keep up with the demand. Is it the demand of spreading Cov19 door to door ? Or just to make a liberal God richer so they can divide his wealth ?

The Crystal ball indicates that Trump has four more years to have a great market. Biden loses his mind and Bernie is most likely to see a dirt nap via a bad heart / rant attack. Meanwhile you will still see plenty of potholes, Our Metro blacks killing in record numbers and the free buses will still be a failure. Sorry, that's all the ball shows right now.

The picture of empty shelves is what can happen with capitalism for a day or maybe two, and the empty shelves represent reality EVERY DAY with communism

8:16 oh ye of little faith, spoken like a true hate filled dimwit. it’s been a bad couple weeks, big effing deal, the Dow will come roaring back and you will be so sad, please continue to go to your therapy sessions because everything will be great again for all us normal people.

Not happy unless something bad is happening to the world is not good dude. I can’t believe I’m saying this, and it isn’t easy but... you matter.

I have an "under the seat mounted" bidet. Works better than toilet paper and only requires about six squares to do the drying. About $25. Easy to install. Once you try it, you'll wonder why you waited so long.