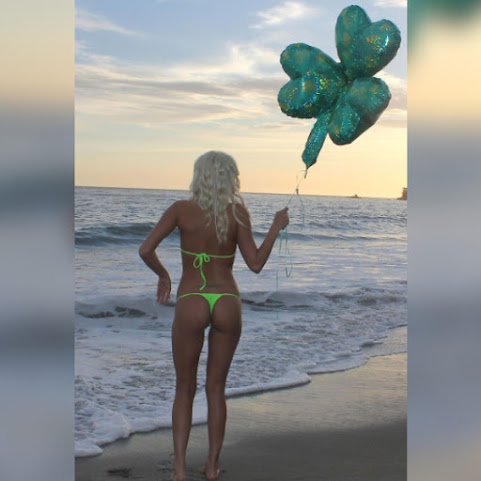 Tribute to an iconic image of hottie Karissa reportedly "showing off her shamrocks" as we check pop culture, community news and info from across the nation and around the world . . .

KANSAS CITY, Mo. - The Kansas City Zoo is closing while the city tries to get a handle on the coronavirus pandemic. In a news release Tuesday, the KC Zoo said that they are closing as a precautionary measure against the spread of COVID-19. The closure begins Wednesday, March 18 and will last until April [...]

Police in Kansas City are investigating a fatal car crash Tuesday afternoon near 51st Street and Ward Parkway.Emergency crews were called at 1:50 p.m. to the wreck.Kansas City police said the driver left the road and hit a tree. Authorities said he was not wearing a seat belt.

RAYTOWN, Mo. - A van used by Midwest Animal ResQ to transport pets and supplies was stolen Tuesday morning and later found destroyed, according to the organization. According to a Facebook post from the group, security cameras captured a black Pontiac pulling into the shelter's parking lot on 63rd Street in Raytown around 3:30 a.m.

Proving that nothing can come between them, Playboy Playmates Karissa and Kristina Shannon stepped out in gym clothes and matching topknots in LA on Tuesday. The twins wore their platinum blonde-dyed hair scraped up into identical buns as they showcased their generous curves in sweatpants and hoodies.


A shot in the arm: Direct cash payments to the American people are what a coronavirus-infected economy needs now

Having woken up to the magnitude of the collapse caused by the coronavirus crisis, President Trump is prescribing economic medicine that matches the economic disease. Good. After previously pushing for a payroll tax cut as the heart of a fiscal stimulus bill, Trump now acknowledges that direct cash payments to working Americans make far more sense for those most harmed by the paralysis caused by widespread cancellations and social distancing.

Two weeks after the U.S. told a handful of Chinese state media entities to slash their U.S.-based staff, Beijing has retaliated with an order of its own: Certain U.S. nationals working with The New York Times, The Wall Street Journal and The Washington Post have been banned from working in China.

DUBAI, United Arab Emirates - Hard-line Shiite faithful in Iran pushed their way into the courtyards of two major shrines just closed over fears of the new coronavirus, Iranian state media reported Tuesday, as the Islamic Republic pressed on with its struggle to control the Mideast's worst outbreak.

Democratic primary voters across all three states heading to the polls on Tuesday said they trust former Vice President Joe Biden over Vermont Sen. Bernie Sanders to handle a major crisis like the coronavirus pandemic facing the nation, according to preliminary findings from CNN primary polling.

It's now day six of my mandatory 14-day quarantine since returning from Europe. Before that, my husband Polo and I traipsed through the tiny stone streets of Lisbon, Portugal for a week, snapped endless photos of the pink, blue and yellow buildings and drank gallons of its wine.

The Kansas City Chiefs winning their first Super Bowl championship in 50 seasons was thrilling - especially given the journey of Andy Reid, who received the keys to the franchise from Clark Hunt back in 2013. What I mean by that is the payoff wasn't automatic.

Kangaroo Consideration Of Keeping Far Away From Mixed Company


Opinion: The case for social distancing

To unite as a country by distancing ourselves from each other seems paradoxical, but that's exactly what we must do amidst the coronavirus pandemic. Obviously, COVID-19 (the disease caused by the current strain of coronavirus) is spread through human interaction.


Rain to move in for your Wednesday

Hide Transcript Show Transcript PRECIPITATION. JUST OVERCAST. WE HAVE A CHANCE OF RAIN MOVING IN, BUT NOT UNTIL LATER TONIGHT. IN THE PREDAWN. 51 AT 5:00. 49 BY 7:00 P.M. MOVING FURTHER DOWN TOWARD 48 BY 9:00 P.M. HERE IS A LOOK AT THE FUTURE SCAN. THIS IS MIDNIGHT.

Just want to say thanks to TKC for remembering our favorite St Pat's day photo.

Direct payment deal is a joke. Many low income people don't make enough to file a federal return so they will get nothing.

^^^ why should they if they don't pay anything to support the system?