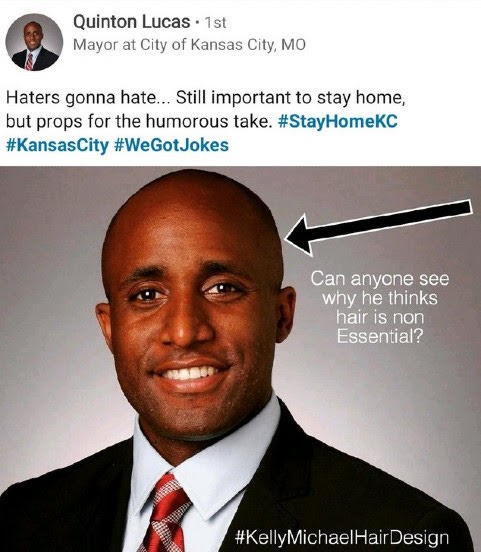 Credit where it's due . . . The Kansas City Mayor is good with locals taking out a bit of frustration on his hairdo (or lack thereof) and open his social media outlets to criticism.

For the most part, the politico's efforts have been met with approval from most KCMO voters.

Last week we asked about the performance of Mayor Quinton Lucas during this crisis and here's a sample of the feedback from both sides . . .

Kudos from the right-wing:

"Mayor Q is a critical thinker and not beholden to the insiders as Sly was and many other mayors. As a Republican, and a geezer, I was happy to vote for him to be mayor."

From a blog fave:

Super Dave: "Look as a Mayor I think Lucas is terrible. But at least he is repeating and pleading to the public what people much smarter than him are saying to do."

"Jeff City is where the real leadership is during this crisis."

"Good time for the city to get out and continue filling potholes."

"The mayor was slow to start but he's catching up a lot faster than most. You've (had) President Trump telling people to "relax" and then sending the markets down. Somebody tell the President to SHUT UP!"

Mayor Q has continued to keep his followers in the loop via social media and we want to thank THE BEST & BRIGHTEST denizens of our blog community for keeping track. Feel free to add to this overnight conversation. Hopefully, we'll have even more good stuff for the morning update . . . STAY TUNED!!!
Posted by Tony at 3/24/2020 10:10:00 PM

All things considered, he's doing better than most.

Some of these comments are okay but let's not forget that this is only day one of the shelter in place order. After a couple of weeks of this there will be more criticism of how this has been handled. That is to be expected. I think how the mayor handles the budget will be the biggest concern. Adding small business relief is a good start but we really need to start thinking about where the city can cut since our revenues will drastically decline.

As the individuals employees in the cosmetology field stress over the next rent check or next meal; Mayor Selfie is stressing over the next joke, at the expense of the newly unemployed.

^^^^ I'm absolutely certain that you don't live in Kansas City and don't vote here. From the sounds of it that stupid opinion is coming from a trailer out in a corn field somewhere. Please do us all a favour and go back your Alex Jones website. You do no represent Kansas City, Missouri and have zero understanding of our city. What you posted is a misleading opinion that is ignorant and devoid of any facts. This blog needs to get a down vote button so you can see how many other people think that your idiocy is loathsome, abhorrent and unsupported by anyone but a small fringe of lunatics.

He is doing the best he can with the limited resources KC has available. What I'm hoping is that he finds more money for police in the budget, the current funding levels are not enough.

^^^^ and yet there are plenty of resources for him to go along with breaks for corporations. Weird.

plenty of resources <<<<< Somebody hasn't looked at the budget.

<<<<< said by someone who wants to ignore all the breaks Corporations have received and still receive.

Smarter than YOU said...

Corporate tax breaks and the city budget are two very different things. Both of you idiots are firing your arguments in two different directions. Typical TKC know nothings.

^^^ the money still comes from the same place, the taxpayers so.....

And Yet TONYSKC hasn't a update feature on the latest K U sexual scandal. Why a person had been reported numerous times and nothing was done. K u sure has sexual deviant problems. Wonder why ?. Maybe because we don't want the ball scratcher fans to be more upset they missed going to the playoffs via COVID 19. Back to the Mayor.....lol " The playoffs ( jack offs) makes Kc a lot of money, and we haven't one case of Corona" pure genius slugger.

^^^ actually there’s twenty cases in Jackson county, 30 overall for kc when counting clay and plate, but still not that many

@5:50. What great advice! You sound like a totally stable person.