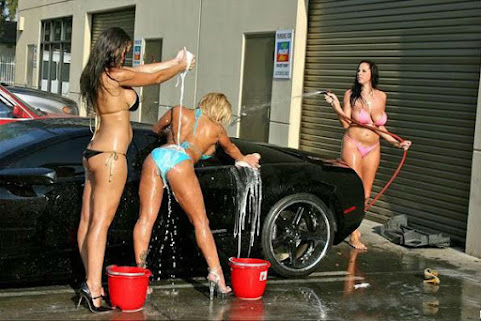 Not so long ago and in simpler times, these professional pr0n hotties showed off their car washing skills for fans. Now public wipe downs aren't as fun but still an important part of protecting public health. And so we present this local & national news compilation of all the important coronavrius news today . . .

With schools around the metro closed to stop the spread of the coronavirus, food service directors in Kansas and Missouri have taken on a daunting logistical challenge: how to feed hungry kids until it's safe for them to go back to class.

CASS COUNTY, MO (KCTV) - On Thursday, the Cass County, Missouri Health Department notified the public that there are three new COVID-19 cases in the county. This brings the total for the county up to four. The three new patients are in Belton, Raymore, and Creighton.

Local officials in Florida towns and cities are taking it upon themselves to close beaches amid the coronavirus outbreak after Gov. Ron DeSantis refused to, even as spring breakers and others crowd the shores. At the height of the college break rush, DeSantis said Tuesday that he would not order the beaches closed, but he did limit parties on beaches to 10 people per group.

Senate Republicans on Thursday formally rolled out a $1 trillion economic stimulus plan intended to deliver critical aid to US businesses and the American public.

Two State Department officials confirmed the pending advisory. The State Department press office did not respond to requests to comment, but announced on Thursday that U.S. passport agencies will only accept applications from customers with life-or-death emergencies who plan to travel within 72 hours. Several current and former U.S.

The Independence Center has announced it has made the decision to close its doors for several days amid concerns over COVID-19.The mall announced on its Facebook page that after Thursday, the mall will remain closed until March 31. Numerous stores inside the mall had already made the decision to close in an attempt to help stop the spread of the virus.

LEE'S SUMMIT, MO (KCTV) - Grocery stores across the nation are changing their hours in an attempt slow the spread of the coronavirus, giving employees more time to clean and stock shelves, and many are offering special shopping hours, too.

City Hall will shut its doors for six hours Friday to let crews deep clean the building in an effort to limit the spread of the novel coronavirus, Kansas City officials said Thursday.


University of Missouri undergrads told to move off campus

by: Makenzie Koch Posted: / Updated: JEFFERSON CITY, Mo. - As of Thursday, all 555 school districts in Missouri are now voluntarily closed due to the coronavirus outbreak. This includes all public and charter schools. The closures affect more than 914,000 students, according to the Missouri Department of Elementary and Secondary Education.

LAWRENCE, Kansas - Kansas' prisons and many of its county jails have suspended in-person visits indefinitely to keep down the risk of coronavirus spreading among inmates. The only exception is lawyers, who will be allowed to visit their clients.

Hy-Vee announced Thursday that it would install temporary window panels at its checkout counters as an added layer of protection for its workers and customers.The panels at the checkouts will be installed in all Hy-Vee locations over the next few days.Hy-Vee also announced that beginning Friday, customers will no longer

KANSAS CITY, MO (KCTV) -- A spokesman for QuikTrip confirmed to KCTV5 News on Thursday that stores on the Missouri side will no longer be selling fresh pastries and roller grill items due to COVID-19. This temporary discontinuation includes hot dogs, taquitos, and donuts. The change will remain in effect until further notice.

Cosentino's is joining the growing list of stores that are taking steps to protect older and vulnerable customers who may be at the greatest risk of contracting COVID-19.Cosentino's announced Wednesday it will be reserving one hour of shopping time prior to opening time each day for customers who are considered high risk during the coronavirus outbreak.Hy-Vee announced a similar move Wednesday.

The number of people who have died from the coronavirus in Italy has hit 3,405, according to Reuters, meaning the country now has reported more deaths than China as a result of the pandemic. The death toll in China, where the coronavirus started in Wuhan, in Hubei province late 2019, currently stands at 3,249, according to data compiled by Johns Hopkins University.


Wall Street is updating its recession predictions. They're extremely bleak

A version of this story first appeared in CNN Business' Before the Bell newsletter. Not a subscriber? You can sign up right here.

In times of national crisis, the country is supposed to rely on the president to provide clear messages to guide them through new problems. But as America continues to deal with the coronavirus outbreak, President Donald Trump is failing.


Community resources that can help during coronavirus pandemic

KANSAS CITY, MO (KCTV) -- A lot of people throughout the metro are waking up worried about how they will pay their bills. Across the country, employers have closed their doors in an attempt to stop the spread of COVID-19. Concerns have closed bars, restaurants and retail stores.

Time for masks and gloves

My car is dirty.