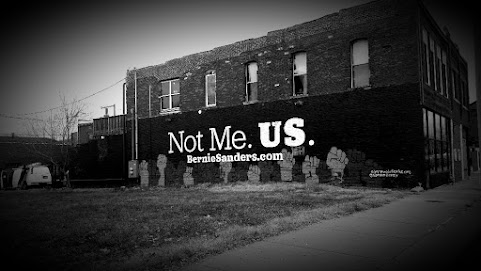 This is a quickie photo TKC took last Fall of a mural at near Gillham Rd & E 31st St. crowdfunded by hundreds of local Bernie Bros.

As of this writing, there's no visible sign of dedication to the former Veep other than an early endorsement by Congressman Cleaver.

Biden is an easy choice for any Kansas City Democratic denizen over 45. The problem: NEXTGEN activists and some of the most outspoken, thoughtful and energetic progressives in Kansas City have been supporting Bernie for years.

Not that it really matters, in the 2020 Presidential election both Missouri & Kansas will likely go to Prez Trump.

However, in terms of fundraising and overall campaign enthusiasm. Kansas City support for a presidential candidate remains important. And, again, we simply don't see the local love for the former Veep just yet.


Column: It's Bernie vs. Biden. Let the slugfest begin

Looks like President Trump was right to be scared of Joe Biden. I didn't think the former vice president could pull it off, especially after his weak showings in Iowa, New Hampshire and Nevada. When I saw Biden in Iowa last month, he didn't inspire confidence.

With a sweep of the south and key victories in Minnesota and Massachusetts, the media narrative today will be all about how Joe Biden is the comeback kid, back from the dead, risen like a Phoenix from the ashes. That sort of thing. It's the kind of story the media loves.

Bernie Bros Against The Democratic Party Once Again


Bernie Sanders is going to war with Democratic establishment

Bernie's campaign slogan should be :

Pocahontas is still a candidate. She’s a liar and really weak and stupid and a woman but she might be better than Bernie or Biden

And yet we've had at least one already (and no, Obama was not one, contrary to some right-wingnut trolls). Weird.

What a choice.
A senile Jew vs. a senile Gentile.

Hahaha was anyone expecting a thoughtful retort from a bigot?

Trump has got us out of Syria working on Afganistan and Iraq. Has Iran eating out of his hand, $2 gasoline, jobs everywhere. How do the Demoncrats run aganist that ?

7:14 Am ^^ Taking 3rd place in your own state is not a Candidate. Warren better up the Free prizes and poor me glass ceiling speeches. Meanwhile the Communist OLD rich Jew really gets screwed by his party. Honeymoons in a communist Country that hates Jews. Now that is a bright bulb. Every other Soviet JEw was trying to flee, Bernie runs to them like a moth to a candle.

Trump has got a better trade deal with Mexico and Canada, has the Chinese re negotiating, NATO countries paying their fair share, North Korea is at least talking to the US.
Sure he is an ass hole, but he's an ass hole working and winning for all of us !

ASSHOLE ? Most Citizens are Assholes. Why expect our leader to not be ?

^^NK just started testing again, but hey, we're talking with them. So how was the meeting a good thing? Trump should parlay that good juju into a deal with the Taliban, oh wait, he did, and the Taliban promptly violated a cease fire.

Trump has one thing going for him. An economy that was trending upward for years prior to his first day in office and has been pumped up by borrowing in the form of increasing deficits and juiced via rate cuts in order to keep it going. All the while, no infrastructure improvements.

China has been re-negotiating for what feels like years now. And family farmers continue to suffer as bankruptcies increase. Winning MAGA, amirite.

Biden is the most corporate establishment candidate of anyone, including Trump. Stock market futures way up this morning.

I don't see Biden getting anymore lucid but I think Jill Biden will have a big role in his administration, just like Nancy Reagan. He will be a puppet for 4 years.

A sober, hard, serious look at the Democratic candidates from inception, must be disheartening to the Left. With a couple of exceptions, the weakest field in decades.

Seriously, Joe Biden is literally dying right in front of our eyes.

Bernie is a Marxist with economic policies that would - by way of Executive Orders, destroy the country faster than you can say, "Corona Virus".

That is the variable, the Corona Virus, which in turn, delivers even more unanticipated variables, which could actually put one of these guys in the Oval Office.

The Media now, is in a full on, frontal attack on Bernie and we are inundated with "Comeback Kid" stories about a Septuagenarian Socialist who can't remember when he was Vice President (Only 4 years ago.). The DNC will do anything to protect their Wall Street, Globalist interests and as of yesterday, Bernie is deader than the corpse in "Weekend At Bernies".

Typical of the legerdemain on the Left, yesterday, Donna Brazille went ballistic on the RNC for speaking out loud about the obvious, blatant manipulation of the rules in order to allow ANYONE AND EVERYONE AVAILABLE to stop Bernie. What a fuckin joke. She was caught, red handed, with her arm, elbow deep in the cookie jar in 2016, on camera, in living color and now, we are all supposed to pretend that the DNC is above reproach.

As usual, the fix is in and no dumbfucks it is NOT the Russians.

"Trump has got us out of Syria working on Afganistan and Iraq. Has Iran eating out of his hand..."

Is that how coronavirus got started in Iran?

Politicians make a living by scolding the little people, usually trash the place, and then walk away with the notion that taxes must be raised because the place was trashed.

JO JO dancer Biden will be lucky if he doesn't stroke out prior to the election. No way in Geezer fuck will his mind or health make it 4 years. Geezerville in Boomer town.

Burisma Biden vs Bernie Bros. this is going to be interesting.

No, that's how the Chinese commie atheists created it.

asking for a friend said...

Joe has that permanent look of bewilderment on his face these days that folks get when the mental slippage really gets ramped up.

The Smile Mask gets used as an attempt to deflect suspicion, but can shitting his pants really be too far away at this point?

A debate between Trump and Biden will resemble a Abbot and Costello routine.

Sanders has actually UNDERPERFORMED compared to 2016. He tops out at 22-30% in almost every state except Vermont. He got UNDER ONE-HALF the percentage in New Hampshire that he got in 2016. "Not-Bernie" is the overwhelming winner everywhere. Do we need Yang to do the math here?

And, that massive tsunami of new and young Bernie voters? More of a ripple than a wave.

I don't think Bernie's policy ideas are all that radical -- but he is a terribly flawed messenger who would be a catastrophic nominee and (even if successful) an ineffective President. Joe Biden is not perfect. I find him -- as I did Obama -- a bit too conservative. But he is a good, decent man who can win and then govern well.

Great Biden wins.......at the next debate he will share that he was the only man on the Oregon Trail to stop and repair the wheel on a black man's covered wagon.

While on the Titantic, Biden witnessed two men kissing and his Dad shared with little Joe that it is ok for two men to kiss, they are British and that is what British men do.

Biden also invented the internet with Al Gore. Just an insider factoid for ya'.

If the Dems nominate Biden, it would undercut their argument for removing Trump via the 25th Amendment.

Who cares who the President is it will be the party of no if Congress is not of the same party. We need Congress democratic!

If he can remember who his wife is, and what the Declaration of Independence says, or where he is at any given moment.


Open primary in MO next Tuesday --Repubs ought to vote Bernie.

If there were any doubt which candidate the Democratic Party establishment favors, 10:28 has just resolved that for you. The party elite know they can control Biden - they'll wheel him out for public viewing as needed - but they can't control Sanders. And for that reason alone, Sanders must be stopped.

So Joe is a Wall Street backing corporate Socialist?

At least try to be coherent in your attacks.

Biden took firm control of the race and is now the clear favorite.

Stocks reacted with the DOW closing up 1,173 points or 4.5% today. The second biggest daily increase of all time.

Markets are ready for Joe!

Awesome! He's all ready for the Ukranian hearings into his quid pro quo then. :)

Which Person wants to admit you'll be giving joe happy endings and changing his depends ?
As I see a lot of people arguing for that same position.

Both are Liberal Democrates, maybe they should just BUTT FUCK it out and at their age see who wins!! Both have heart disease, and one has dementia, neither one would live through a term as President anyway!! The real democrate race is the VP if one of these fags gets elected and I can assure you Hillary is waiting for a VP nomination!