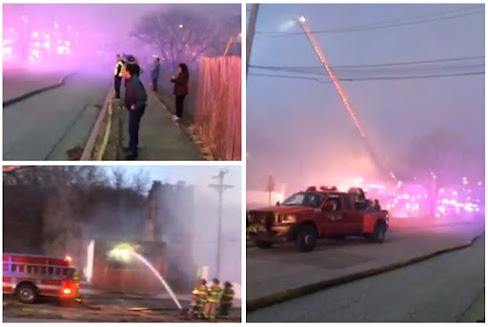 Here's tonight's roundup of the scene that dominated evening news coverage . . . It's worth noting that the structure was vacant like a great many places of worship in the metro.

Firefighters in Kansas City, Kansas, are battling a fire at an old church near 25th Street and Metropolitan Avenue.Fire crews were called at 5:15 p.m. to the old St. John the Divine Catholic Church. A large plume of smoke could be seen for miles.Fire crews had to rescue a family from a nearby building.There were no reports of injuries.The church had been vacant for years.

Historic church.....sadly, um, NO! It was ruins already for decades! Heck, I got pix of SJD and some other Argentine and Armourdale sites 10 years ago, and at Christmas '19, when I took a gift to the Firehouse on Strong Avenue. At the tiny St John Divine campus, there was a shoddy shell for the crumbly brick clad church with holes in the back roof, and a couple of partial walls of the old small school fallen in--exposed to the elements. The rats' nest of exposed wall lathes, dry rot framing, busted out--somewhat boarded over windows, and droopy electrical wires should have been given Last Rites hella eons ago. There's been no sane reason to have let this little Catholic church get this nasty neglected starting 30+ years ago. Oh wait! Too late! The burb parishes were getting their Mansion Monuments built near their country club golf courses. Well, San Juan Evangelista a few blocks northwest of SJD could use resources to maintain its campus--church, rectory, school, day care, and OSB staff residence.

Been spending too much paying off victims of the perverts. No monies left for repairs.

Just 1 person raped by a priest is 10,000 times more of a tragedy than this. Did God allow Notre Dame to burn? Yes he did!

It would be so fun if the victims of the pedophiles burn every Catholic and Baptist church.

^^^^ the KANSAS CITY ATHEIST COALITION speaks...it would be a short step from that to burning actual Catholics and Baptists. After all, EVERY time atheists have had the actual political power to kill they have done so.

Oh, Jeffrey/11:04, you'd love for your victims to burn all the synagogues, Hollyweird casting rooms, modeling agencies, private jets, and island resorts. Well, enjoy your weiner roast in hell. That Weinstein weirdo looks frail, so he's on his way to join you in Satan's inferno cesspool.

Oh, Billy/9:59, you paid off more than Paula Jones. The rest you Arkycided. Epstein is toast, but just like Harvey, you may have charges coming at you from long ago flight and island romps.

Oh, Hilly/10:05, you laughed at a 12 yr old rape victim while representing a freak, who was like your husband. Did God allow you to lose an election? YES, Thank You, GOD!!

We all knew St. Peter's Pedophile Protection Program would chime in with perverted pandering politics.

IKR? Because the Catholic child abusers are actually athiest moles who spent decades hiding in the church ... BECAUSE THEY KNEW THEY'D BE PROTECTED BY THE SECRET ATHIEST PEDOPHILE POPES! The entire Catholic (and Baptist) church is run by atheists, that's the only possible explanation.