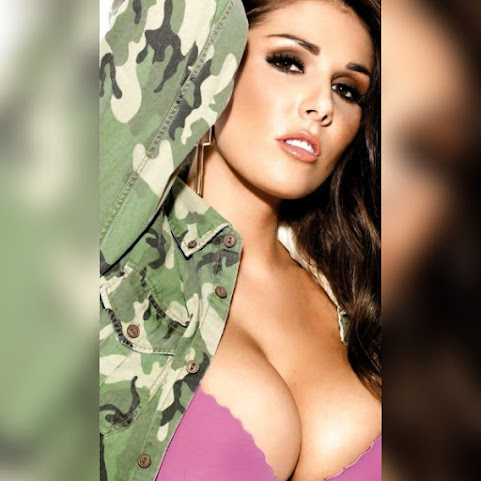 With respect to an iconic image of hottie Lucy in cammo to calm & inspire . . . Here's the word:

Fox4: No, the National Guard is not imposing Martial Law; Here’s what they are doing to combat coronavirus

Never forget “Wartime President” Trump fiddled when the US fell into the abyss...

Jan. 22: “We have it totally under control. It’s one person coming in from China.”

Feb. 2: “We pretty much shut it down coming in from China. It’s going to be fine.”

Feb. 24: “The Coronavirus is very much under control in the USA… Stock Market starting to look very good to me!”

Feb. 25: “CDC & my administration are doing a GREAT job of handling Coronavirus.”

March 2: “You take a solid flu vaccine, you don’t think that could have an impact, or much of an impact, on corona?”

March 4: “If we have thousands of people that get better just by, you know, sitting around and even going to work – some of them go to work, but they get better.”

March 4: “I never said people that are feeling sick should go to work.”

March 6: “Anybody right now, and yesterday, anybody that needs a test gets a test. And the tests are beautiful. They are perfect just like the letter was perfect. The transcription was perfect. Right? This was not as perfect as that but pretty good.”

March 6: “I like this stuff. I really get it. People are surprised that I understand it. Every one of these doctors said, ‘How do you know so much about this?’ Maybe I have a natural ability. Maybe I should have done that instead of running for president.”

March 6: “I don’t need to have the numbers double b/c of 1 ship that wasn’t our fault.”

March 8: “We have a perfectly coordinated and fine tuned plan at the White House for our attack on Coronavirus.”

March 9: “The Fake News media & their partner, the Democrat Party, is doing everything within its semi-considerable power to inflame the Coronavirus situation.”

Someone posted a photo of a train of hummers on flat cars in Grandview and started this rumor. That person has been removed from my FB page. This herd mentality is going to cause problems for law enforcement as well as creating more panic. I think that head worms from stupid people is the real pandemic. Wash your hands and respect personal space.

I infected your mom

Quote from the 45th President on 2 February: "We pretty much shut it down coming in from China. It's going to be fine." This comment was made on the Fox News program "Hannity." A few days prior to this interview, 45's administration suspended entry to the United States of foreign nationals who had recently visited China, excluding Hong Kong and Macau. -

Feb 25th
On this day, @realDonaldTrump made a two-part Tweet, starting at 8:29 pm: "CDC and my Administration are doing a GREAT job of handling Coronavirus, including the early closing of our borders to certain areas of the world. It was opposed by the Dems, "too soon", but turned out to be the correct decision. No matter how well we do, however, the....." ".... Democrats talking point is that we are doing badly. If the virus disappeared tomorrow, they would say we did a really poor, and even incompetent, job. Not fair, but it is what it is. So far, by the way, we have not had one death. Let's keep it that way!"

Just because Snopes says something is true does not mean it's the whole truth either.

Remember most of America still say it's a hoax and the quaritines are not needed but if Trump had continued to do nothing they dickheads like Byron would keep bitching about it.

He should have done what past democrat president did and round up all the Asians and put them in internment camps
But don’t worry, if you like your Dr you can keep him
On a serious note, did you think that anyone would have known the extent of this two months ago?
I don’t even remember any news about it. I’m sure there was some, but certainly not at the level of histeria of the last few weeks

@7:16, In your post above, you mis-typed the words "most of America" when you meant "nuts in America".

Glad I could help.

Sylvester, 2 months ago it was an obviously dangerous epidimec and not at all secret, and in the news constantly. But your excuse for your lies is that it was not in the USA news as much until it became a Pandemic in the USA? That's how news works you asinine koolaid sucker.
Obviously Trump knew about it when he LIED
Jan. 22: “We have it totally under control. It’s one person coming in from China.”

You and Trump sound even stupider than the self serving morons that said "Nobody knew hijackers could fly planes into buildings" even though studies and warnings had been published.

To lift morale before the charge, Lucy brought out the big guns in a show of force!!!

So in your mind Trump only needs to be better than the corporate Dems in one way? And that's all you need to make yourself ignore the amazing record of self serving lies that you can just scroll up to read?

Don't you Trump groupies care that the 3 months of lies and rank incompetence endangers your own families?

But yet 55% of Americans think Trump is doing a good job. Weird.

What’s with the crybaby taking over all the posts and making everything about Trump? Effing freak

Doesn’t the military move stuff on trains year round, yes, yes they do

Sorry, I know 4th Grade Math is hard, don't want to upset you.

Umm it is 55%, abc news poll, unless now you consider abc news to be unreliable because they went against your personal narrative. I know it’s hard for your level of competence to understand but you’ll eventually graduate from the fourth grade in hopefully two or three years.

ok, the cavalry is not coming. got it now.