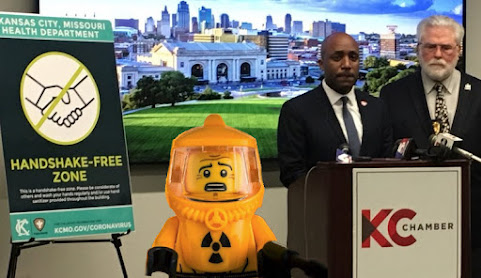 The choice to continue with the NCAA Big 12 basketball tournament as a pandemic spreads across the nation will forever be remembered as one of the most cynical and greedy decisions in Kansas City history.

@RAEtheReporter - "Mayor Lucas says the city will not cancel Big 12 Tournament or the St Patrick’s Day parade at the moment - stating there is no reason to suggest there is a current threat right now in the city."

Meanwhile back in reality . . .

There are have been two confirmed cases in the metro area. More importantly, across the nation we notice conferences, festivals, parades and sporting events have been delayed or cancelled by officials who are taking this threat far more seriously than cowtown politicos.

Still, nothing stops the Downtown party in Kansas City.

WILL YOU ENJOY THE BIG 12 AND PARTY WITH DOWNTOWN KANSAS CITY COLLEGE BASKETBALL VISITORS?!?!

KC Health Department dude Dr. Rex Archer just gave advice to those over 60 & 70 to stay away from large gatherings like the Big 12.

The only real contribution of a morning presser was a willfully ignorant and amateurish "no handshake zone" public service message.

So far, the KC St. Paddy's parade is still on which is another nightmare that also deserves attention . . . Nevertheless . . .

Despite assurances, there will likely be fewer people at this event. And so, we share these links that offer more information that will hopefully protect people from suffering this virus given an obvious lack of real concern by City Hall.


Despite coronavirus concerns, Big 12 Tournament is moving ahead as normal

KANSAS CITY, Mo. - Crews spent Tuesday setting up the finishing touches outside of the Sprint Center for the 2020 Big 12 Tournament. Among the activities and games, hand sanitizer kiosks placed all around the Power and Light District. Thousands are expected to fill the area over the next few days.


Big 12 commissioner speaks about coronavirus ahead of tournament

KANSAS CITY, Mo. - Thousands of fans are expected to fill the Power and Light District this weekend in Kansas City, Missouri, for the Big 12 Tournament. With the Kansas City metro seeing its first case of coronavirus, Big 12 commissioner Bob Bowlsby said they want both fans and players to be safe.

The Big 12 is implementing extra precautions to keep players and coaches safe amid the coronavirus threat. Locker rooms will be closed to the media.

KANSAS CITY, Mo. - On Wednesday at 7 a.m., Kansas City Mayor Quinton Lucas will hold a press conference to discuss prevention plans for COVID-19. Across the U.S., more than 1000 people are infected. The highest numbers are in New York, Washington state and California.

The Kansas City Area Transportation Authority says its crews are cleaning buses with foggers because of the coronavirus threat."Something new is that we are disinfecting them every day, so we are using foggers to disinfect our entire fleet," said Jameson Auten, deputy CEO of the KCATA.That includes 300 buses, as well as other KCATA vehicles.

Next week, about 900 college basketball players and a few hundred more coaches will fly in from college campuses around the country and congregate around nine NCAA Tournament sites. Given the spread of COVID-19 around the United States and the uncertainty of how many people actually have it due to lack of testing, it's conceivable that someone participating in a tournament game will be carrying the virus.

KANSAS CITY, MO (KCTV) -- There are no confirmed cases right now of COVID-19 in Kansas City, Missouri, but the CDC says it's time to put prevention plans in place. Mayor Quinton Lucas, local health officials and the Chamber of Commerce will meet at Union Station on Wednesday with employers about how to prepare for the coronavirus.


Fans not allowed at Big 12 games after Wednesday

KANSAS CITY, Mo. - Shortly after the NCAA said upcoming basketball tournaments will be played without spectators , the Big 12 Conference said fans will still be allowed to attend the games tonight in Kansas City, but not for the rest of the tournament. Fans will not be allowed at the games beginning Thursday.