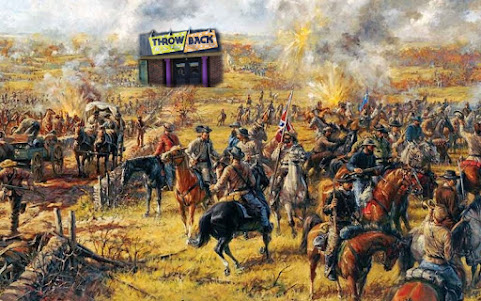 The spate of deadly gunfire in Kansas City over the weekend seemed worse than just a mass shooting.


After Westport shooting, nearby business owner says he's fed up with problematic club

KANSAS CITY, Mo. - The shooting early Saturday morning in Westport outside of Throwback KC is the latest black eye for the entertainment district struggling with its reputation. Devon Carter, 25, has been charged with crimes associated with the shooting.

KANSAS CITY, Mo. - A birthday celebration erupted in gunfire, leaving one person dead and four others injured after a drive-by shooting Saturday in the popular district of Westport. On Sunday, the Jackson County prosecutor's office charged 25-year-old Devon Carter, of Kansas City, Kansas, with unlawful use of a weapon and armed criminal action.

I think people are voting with their feet. Westport isn't like it once was, most of the younger people have stopped going with the exception of one or two places. It's not really a KC destination any longer.

Um, if you referenced the battle of Westport you OBVIOUSLY know that this place has been through much worse.

6:32 We Confederates were outnumbered 3 to 1 and ran out of ammo. If we would have carried the day, along with our Southern brothers, there would be no problems in Westport.

America is corrupted from within by a grotesque, narcissistic, self-flagellating preoccupation brought on by decades of indoctrination from Marxists in Academia, the 4th Estate and the Deep State that insists we tear down statues, deny the truth and pretend with Hale-Bop-Purple-Shoe certainty that the reason for racial conflict is a lack of "diversity". I would bet all three stars and my General's wreath that the "Demographics Is Destiny" trope will sooner than later, consign more and more middle class Americans to "Dhimmi" status like it does, right now in South Africa.

Facts are facts and Americans can all pretend that we are all going to be living in a land full of flying unicorns and rainbows, but, the truth is, more and more areas like Westport will be destroyed just like the thousands of neighborhoods that have already been destroyed.

In 2024, or 2028 there will be a Socialist President and the precipitous slide into chaos will be inevitable.

Machiavelli said we all get the government we deserve in the end and boy are we going to get it and get it hard.

I say raze it and build the Royals their new ballpark there. Who will miss a dead party district with D-Level bars and clubs and a World Market?

Coloreds and hip hop bars. What could go wrong?

No one cares about the gun violence in KC until it enters our "safe" parts. Meanwhile, the East of Troost section of KC is a war-zone. This is why if I am elected I'll be on the phone every day trying to bring real manufacturing type jobs to KC. Also, working closely with ICE to deport as many illegals who are currently taking jobs that our own poor residents need.

^^^^ How damned many jobs have been created and gone unfulfilled because "our own poor residents" have a pretty damn good life off welfare and a few "off the books" and entrepreneurial activities?

Reagan converted the US Economy into one where the only export the USA had left was jobs, and the present jackoff hasn't done a damned thing except change the way shit is counted and reported.

If elected you will do exactly what every Politician from either Party does, line your own pockets and the pockets of your bosses.

Whether America's Pub or Throwbacks, that location has always been trouble. It's the largest bar in Westport. it's the only "club" in the district. Whether a light up disco floor or whatever is in there now, it's a problem. If I were the building owner I would terminate the lease and do some MAJOR redevelopment work to convert that space into something else. It's going to drive traffic away from the entire district if it continues...

Wait did they charge the guy with murder or not

Wasting ammo, I think. Even our broke-dick prosecutor should be able to make that one stick.

New name of the club is the Shoot Back

Westport business owners have begun eating their own and are attempting to use Throwback as a scapegoat for their failed priorities. This is a bar district. If you close Throwback another bar will take its place. The issue is not with the bar but will the neighborhood. How quick we forget the shootings at Sunfresh, the AC hotel and the parking garage not to mention all the dead people found shot in the street scattered through the westport the past few years. Throwbaack has at least tried to enhance security by adding KCPD off duty officers to their bouncer staff. No other bar in Westport has done that.So instead of complaining like the rest of you, let me give you some solutions to the problem

1. The bar district must be redesigned to minimize vehicle traffic coming into contact with pedestrian traffic. 24/7 365 days a year. This means parking lots are closed and people must use the parking garage when entering the bar area.

2. Westport security officers have to be better trained to know that their roles are not the same as police officers. They must do a better job being more visible in areas away from bar entrances to ensure people are safe walking to and from the district. People need to be challenged more who appear to be underage and/or just hanging out.They need to add more officers and reduce the dependence on police officers to secure the district on the taxpayer dime.

If you are a club and you don't play hip hop music, you will be accused of attempting to steer "communities of color" away.

The solution is to play Gloria Gaynor and other black diva anthem songs. No more heavy hitting brothas, only Ramona and her boyz.

Well finally a thoughtful comment among all the KKK shit

True story. Went to the Roxy in the golden ghetto for years. Other than an occasional stolen slut fist fight, no problems. Play hiphop, killing in the parking slot. Same at the former Riekes landing on Merriam lane. I'm not going to spew racist hate like others. But there is a common denominator.

When hood rats shoot other hood rats, isn’t it a good thing?

@Ryan Derks, What could you possible even do to the East side? There is NO outside influence that change built-in behavior from generations of degeneracy. East side is a war zone 'cause that's how the parents of the parents of the "blxck youth" were raised. You'll get rid of the brown ones for what? The vacuous hope that if hard labor jobs are made available you'll have throngs of black folk who will swarm in and perform that hard work, despite them likely never knowing a single person who has ever worked a "normal" job, or anyone who has manually labored. Say what you want about the brown skin little folk, you give them a little money and any damn one of them will pick up a tool and just start working. Not so with the denizens from the dark continent.

I wonder how Signal Theory feels about moving down there now, and having their sign in all the news coverage. Can't be good for employee recruiting.

As long as we don't violate any Civil rights of the Criminals. Victims are not even the priority.

the afro american population is practicing dysgenics,,, their worst behavers are multiplied, their rearing malpractices are encouraged, the behaviour is excused, academics propose half baked theorems on mal ill behaviour, you are a nazi if you question why 90 percent of murders in kansas city are ameriafro, anything other than its american euros to blame for american afro murders thru not giving enough is nazi klan talk.

The Klan cant hold a candle to the black on black murder rate. Blacks kill more black every year than the Klan did throughout history. The Klan is all but dead in 2020. When was the last time you heard of an actual Klan related murder ? 1983 ?