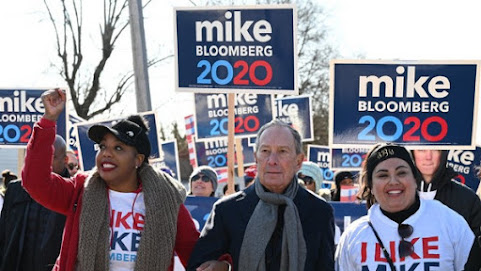 The saddest part of this local story is that these campaign workers earned just a bit more than their Democratic Party colleagues and now the good times are finished along with one of the most expensive vanity political efforts in recorded human history so far . . .

Michael Bloomberg ended his presidential campaign on Wednesday and endorsed Joe Biden, closing out a costly run that saw the former New York mayor spend hundreds of millions of his own money to fund his late entry bid.

Bloomberg still gets to keep the Mexican golf course grounds keeper. Black maid and the guns protecting him because " A rich guy like Me".

So the leasing company made a profit on the campaign offices that he (Bloomberg) was setting up in the metro. Capitalism, can't live without it.

All the billions he spent on self promotion, wow, imagine how that money could have been used for philanthropic purposes, and he would have had a better public image to boot.


I just love for perverts to smell my hair. Biden 2020

It’s easy to see why the Democrats are the party of choice for faggots, homosexuals, lesbians, transgenders and other maladjusted people.

Enjoy the Show This is History. Two Socialist Sleepy JOE a PUPPET for the NEW WORLD ORDER and deep state That can't remember what day it is and what state he is in. And the Bern,EVERY THING IS FREE. Come across the border every one is welcome .

And yes some people will vote for them.

Actually, Bloomberg quit out of a sense of patriotism.
He realized that, if a Billionaire ever got into the White House, the entire Country would go to hell in two years!

6:02: And no billionaire has ever served as president.

Half a BILLION bucks and he gets American Samoa....

Damn. That would have filled alot of potholes in killa-snitty.

He's eating Pizza right now and having a finger licking good time. Are you ? EXACTLY. Real pie made by illegal Pygmy slaves.

Actually, Mike spent his money well. He effectively beat back Bernie -- directly or indirectly -- and is free to spend his money continuing to beat up on Trump. He never really planned to be President himself except as a last resort -- if neither, Joe nor Amy nor Pete could break through.

Why would a REAL billionaire -- not just a con man who played a billionaire on TV -- want to put up with the hassle?

Vegas is pissed!!!! - They wanted the money Bloomberg wasted on a campign to be president to be in their pockets!!! The house (The White House) Always has the advantage!! Silly Bloomburg looks like the dumbass he truely IS!