BERNIE & BIDEN BATTLE FOR HEARTS AND MINDS OF KANSAS CITY!!! 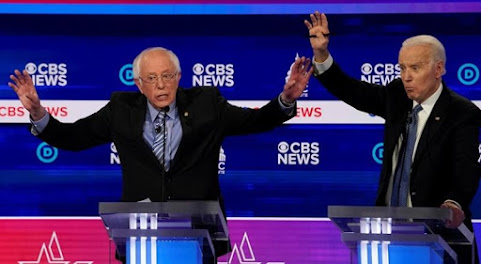 A quick look at a contest betwixt grumpy old men for the future of the Democratic Party . . .

Apparently, and once again, it seems that this cowtown will take an active role in shaping American history.

"It appears the Kansas City area is the battleground in Missouri as Biden leads 49% to 46%," according to the analysis.

Both candidates have rallies scheduled for Kansas City in the coming days. Biden is set to appear at an event the Liberty Memorial Saturday. Sanders has a rally planned for Monday at the Midland Theater.

it's not a bad place to be. Both Biden and Bernie could defeat Trump. The Bernie Bros threatening to stay home isn't a big deal. There are more than enough voters ready and willing to take their place. The swing states that Hillary lost all supported the top 5 Democrats. Trump is toast.

^^^^ That's easy to say now. They said the same thing about Hillary before she lost. It's easy to talk a good game before the voting starts. After it's finished is always a different story.

Biden cannot beat Trump. If you really want the President and all of his cronies out of office, Senator Bernie Sanders is the only choice.

Neither one of them can beat Trump. Sorry. You can try again when Don Jr. runs in 2024. See ya then, pal!

More than 300 million people in the United States and this is the best we can do? The Democrats had 4 years to prepare and this is all they could come up with. Basically a replay of last time around. They only have themselves to blame.

If Trump wins. Cancel the constitution, he's going to shred it.

President Trump wins reelection and the Republicans take back the House.

Everybody on this blog can say that MAGA KC told YOU so.

^^^^ Thanks fellow Boomer! We know you're old as shit only another Boomer would post that b.s. without saying anything worthwhile. Welcome to the club!

^^^ Not likely. The average age of readers on this sh*t blog is 77. But thanks for trying. Weird how much you suck and aren't really as cleaver you think. Bitch.

He knows you've been sniffing the farts all afternoon, so no matter what you're a pretty useless sack of poo poo. You can do better man. Go out there and TRY!

I'll be canvassing for Bernie all weekend. Seriously, come out and join us!

Long time democrat, vote every election, never voted for a R in over 30 years. It's Biden in the primary, trump in the general MAGA

Nah, vote for Biden, the guy is senile, think how entertaining the debates and the bernie-bro riots will be. Trump will mop the floor with old corrupt joe.

Chimpy is so angry today! And so very very old.

3:38, you won't be going anywhere this weekend, unless one of your mental ward attendants agrees to be with you at all times. And they won't. How'd that last home visit go? Really badly again?

KC Loves Bernie! He will win.

The nominee doesn't matter. The US will be in recession in a few months and Trump's disapproval will jump to 75%. He is toast.

Weak. Take more time with the next one.

Every time someone says Bernie my butthole twitches. Weird.

2:53 - is a tit fed KCFD FF, their union (IAFF) is the core of corruption in this country! That union as well as every union votes Democrate! Self serving pussies to say the least!