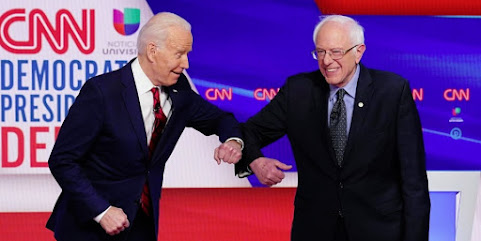 
Sanitizer. Skip the handshake. No audience. A unusual debate, thanks to coronavirus.

WASHINGTON - If you deliver an applause line and there's no one around to clap, did it really land? That was the question at Sunday night's debate on CNN between Bernie Sanders and Joe Biden when, because of fears of the coronavirus, there was no live audience to boo! or woo!


The biggest takeaways from Biden and Bernie's one-on-one debate

Joe Biden and Bernie Sanders had the debate to themselves Sunday night, but a new interloper - coronavirus - took center stage from the start. 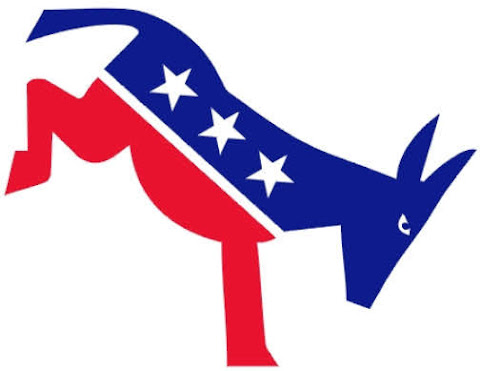 The only we know for sure is that once again the Democratic Party will likely pick a ticket with lady veep contender as Prez Trump and his vast network of supporters gear up for the election fight.

Safe to say that President Trump might have won this one again.

This reminded me of two mildly addled old men, sitting on a porch, arguing about all the problems caused by those damned horseless carriages.

Sort of bizarre . . . and you really have to wonder how these two are the best the Dems have to offer.

Plus . . . they both seemed to have a touch of the Wuhan flu

I am completely demoralized by having to choose either of these guys. Our party is all talk.

But the empty shelves in all KC Grocery Stores also speak to the level of confidence that the majority of Americans have in the ability of the Trump Administration to deal with what the Presidents says is "just the flu, folks"!

Remember hat the GOP has lost the "anybody but Hillary" vote this time around!

The empty shelves point more toward human nature than anything else. Anyone who has ever lived in hurricane country has seen panic shopping.

And Hillary would have stocked shelves?

Trump lost the election when he bungled the American response to the virus. He only compounded the failure when he continually lied about containing it. Everytime he opens his mouth the markets drop. People are through with thim, and this thing is only getting worse. Here come the layoffs.

Calm down, chicken little. Put the TDS on hold for a day or two if you can and find your fucking balls.

Nah..Trump needs to get drug over this. He has no idea what's going on. The TDS you are referring his his dementia. Times like these make me wish we had a President who was alive.

Trump cultist wants to bully us into forgeting what we all saw happening.

^^^Biden already has forgotten. No bullying was necessary/

The life alert buttons on the podiums is a nice feature.

Did Dementia Donald piss himself again at today's news conference?

There was more competent communication, information and leadership from both candidates in the first 5 minutes of this debate than we've seen from the slurring corrupt stooge now in the White House over the last 3 years.

^^^Horrendous! Trump has ensured that none of you chuds will ever be able to retire. Heading down to 18,000 on the dow. Should get there tomorrow. That's where it was when Obama left office. MAGA! Everything Trump touches dies.

He must have soaked his Depends today.

What? You mean you're that in love with being a total pussy? Good luck, snowflake.

More gaffes, you mean. What an old folks comedy.

Nah. Markets recover eventually. But what would you know about investing? You're a chimp!

Be all that as it may, Vegas oddsmakers are now calling a Trump/Biden match-up "even money"!

First time since book opened on the 2020 Election that Trump isn't favored.

And yet usually a president loses when the economy goes sour, especially if that president claimed credit for the markets going up. Weird.

Do you think either one of these democrat criminals can run a food truck. The deep state wants them in so they can be controlled and manipulated they wanted hillary in for the same reason they had the goods on her too