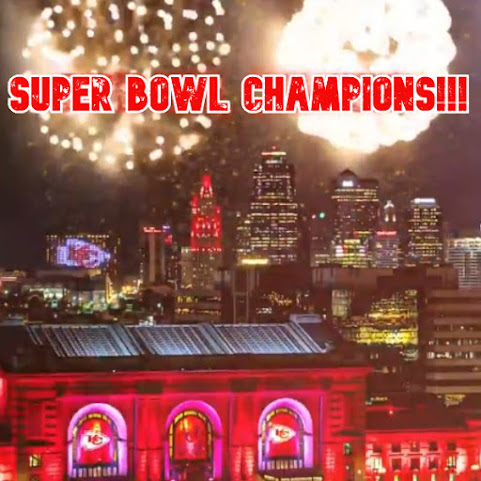 Our blog community never doubted this team, not for an instant.

Sure, we hear sirens, gunfire and fireworks in the background but overall the sense of euphoria seems to be the dominant emotion.

Accordingly, we share some of our favorite news items from the celebration and ensuing coverage . . .

Patrick Mahomes keeps rewriting the NFL history books, and the wait for the Chiefs -- and for their head coach -- is finally over.

Patrick Mahomes and the Kansas City Chiefs stage a stunning comeback, scoring 21 points in the fourth quarter, to beat the San Francisco 49ers 31-20 at Super Bowl 54 in Miami.

Ahead of Sunday's Super Bowl LIV matchup pitting the Chiefs against the 49ers, the NFL paid tribute to Lakers legend Kobe Bryant and the other eight people who died suddenly last week in a helicopter crash. The respective teams lined up at the 24-yard-line in honor Bryant for a moment of silence.

According To Kansas City

MIAMI - There was a time when there were no African American quarterbacks starting in the NFL. But in recent years, that's changed drastically. Super Bowl LIV is the latest example of the shift. Fifteen of the last 16 Super Bowls have featured an AFC team led by Tom Brady, Ben Roethlisberger, or Peyton Manning at the quarterback position.

In an exclusive interview with Fox News' Sean Hannity during the Super Bowl LIV pregame show, President Trump said the State of the Union would go ahead as scheduled on Tuesday -- just a day before the Senate is set to acquit him after a months-long impeachment process.

Another Super Bowl is in the books, and now we find out which ads people will actually still be talking about now that the anticipation is over. It wasn't the strongest year, with few truly iconic pieces of creative, but there were still quite a few gems in the muddled mix of A-list cameos and emotional entreaties.

Not all tackles happened on the field at Super Bowl 2020. Security guards took down a woman who tried to rush the field at Sunday night's big game, before she was able to make it onto the playing surface.

It's hard to put it into words, but your Kansas City Chiefs are World Champions. It's an absolutely incredible feeling - for most of us, a once in a lifetime moment. One that we'd like want to have more oftend. Everyone around Chiefs Kingdom is a winner tonight, but here are some who stood out in Super Bowl LIV.


'Kegger at my mom's house': Paul Rudd said it's time to plan a big party

KANSAS CITY, Mo. -- The Chiefs are Super Bowl Champions, and it's time to celebrate with a party, possibly one at the home of Paul Rudd's mom. "I'm freaking out. I guess we really got to plan a big 'ole kegger, don't we," Rudd told FOX4 during the Chiefs post game celebration.

KANSAS CITY, Mo. - Kansas City Chiefs fans celebrated so much following the team's Super Bowl LIV victory that it caught the attention of the National Weather Service. The NWS in Kansas City tweeted that the fireworks throughout the city were detected on radar. Here's #KansasCity erupting in celebration, as detected by our radar!

Not Quite The Big Game Amid Exceptionally Pricey Tickets


Attendance for Super Bowl lower than any other except first

Attendance for the Super Bowl was 62,417.In terms of official numbers, that is the second-lowest attendance in the game's history behind only Super Bowl 1 - which drew 61,946 fans and didn't even sell out.Sunday's game at Hard Rock Stadium was a sellout, though was much lower than the 74,059 who came to the game the last time it was at the Miami Dolphins' home stadium in Miami Gardens, Florida.Dolphins owner Stephen Ross spent more than $500 million refurbishing and remodeling the stadium since, and one of the things he did was lower the capacity considerably.

So you're telling me that Trump won or lost the Super Bowl.

^^^ Figure it our for yourself, dingleberry.

This blogs cracks me up.

But so happy the Chiefs won I don't care about the snarky B.S..

The parade is going to be AWESOME!

Love the blog Tony, but be honest with us champ. However the game turned out the headline would have been..."TKC told you so".

The only winners tonight were the Chiefs. The rest of you so called fans or a good majority that is were not that long ago calling them all kinds of vile names. The fans had to wait 50 years to see this win but it wasn't their win. Oh sure they want to ride on the coattails of the Chiefs thinking it is some sort of an award to them but in the end the only ones who benefit from this win in any way is the Chiefs themselves. So run out now and buy up all this Super Bowl merchandise that will hit the shelves here real quick and make lot of people who don't even know who you are, who if you died tomorrow could cares less just as long as you buy something first before you die so they can get even richer off of you fools who throw money at them.

What's this I read about the Puppet Lady being a slumlord? That's very fitting and says a lot about the fans in Kansas City.

Kansas City Chiefs won so it's all over now. Arrowhead is closed till the concerts start. Mahomes will buy some more shoes and the rest of Kansas City will be just like it was yesterday and the day before that. Nothing has changed, it's still Killa or Shitty City however you want to look at it. Probably be more dead before the sun rises on this overrated city again. You can put a gold collar on a pig but it's still a pig no matter what. When is Kansas City going to get this excited about dealing with the black on black killing?
Nope Kansas City will get all liquored up tonight act stupid well dumber than normal and all wake up tomorrow excited about a parade then by Thursday after more hard drinking and acting like fools the fans or hell about everyone will wake up with hangovers and suddenly realize nothing has changed. Not a damn thing is better about their life in fact it might even be worse. The drunk felon across the street in shooting off a gun celebrating just happened to wack out half his family.

See you in another 50 years.

How dare you! This blog AIN't For chiefs fans! I am highly offended.

Ha! Chiefs run the geezers! Where’s Kerouac? The idiot stupid Dave, and all the boycotted????

The Idiots, Morons, Inbred Rubes and Mentally Ill where on their finest behavior last night after the game ended.

^^"Where" on their best behaviour??? Jesus Christ retard, you're as dumb as the president!

^^^ mildly less or more stupid and racist than you?!

You have been insulting the LOL Chefs, fake Gronk, and overrated Mahomes for years.

You've been hating on the Chiefs for years Tony STFU

^^^ Pretty sure that's the joke, dimwit.