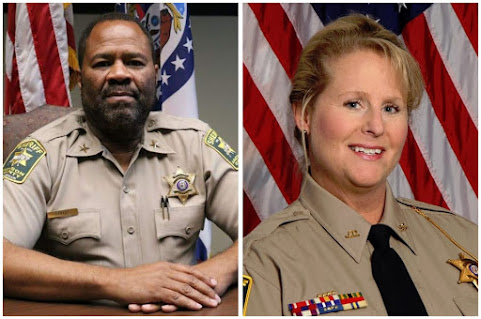 The County has a "complicated" history concerning women in the workplace.

Last year a debate over bras confronted the current Sheriff.

“Equal advancement opportunities within the Jackson County Sheriff’s Office is more than just a slogan. It’s a priority and a practice that I am committed to carrying out,” said Jackson County Sheriff Darryl Forté. “For decades, women have played an important role in the male-dominated field of law enforcement and it’s our job as leaders to ensure that those women have a chance to serve at a high-level of command. I am confident that Captain Montgomery will excel in her new role, helping us as an agency continue to deliver the highest level of professional services to our diverse community. We are so proud of her and she has our full support. Today is an exciting day for the Jackson County Sheriff’s Office.”


Captain Montgomery began her career with the Jackson County Sheriff’s Office in 1994. During her tenure, she has served in many capacities, including field deputy, field training officer, off-duty coordinator and the first and only person responsible for obtaining grants from 2002-2010. Her work as a grant writer has been credited for establishing the Office’s first full-time traffic unit. She is a founding member of the Jackson County Traffic Safety Task Force, has supervised units including Information Technology, Courthouse, Investigations, Midnight Road Patrol and Records, as well as served as Public Information Officer.

Most recently, Captain Montgomery supervised the Sex Offender Registration and Enforcement Unit and was responsible for Operation Thriller and Operation Lights Out in 2019, which coordinated sex offender compliance efforts of nearly 20 law enforcement agencies.

“If it wasn’t for God, my amazing family and some of the best coworkers anyone could ask for, I wouldn’t be the person I am today,” said Captain Ronda Montgomery, Jackson County Sheriff’s Office. “I am beyond honored that Sheriff Forté recognizes my accomplishments and trusts me to represent the Sheriff’s Office in this leadership position.”

A passionate career woman, wife and mother of two, Captain Montgomery still finds time to serve the community outside of her role with the Sheriff’s Office. She is a current board member of the Jackson County Youth Court, the Jackson County, MO Family Court Juvenile Detention Center and the Kansas City Regional Mortuary Operational Response Group.

Captain Montgomery earned her Bachelor of Science degree in Criminal Justice from the University of Central Missouri and is currently studying for her master’s degree. She is an alumni member of Zeta Tau Alpha Sorority and a graduate of St.Charles, MO County Regional Police Academy.
###
Posted by Tony at 2/28/2020 03:00:00 PM

Credit to any one who has endured that much time in the department, they've earned it.

What does our sheriff’s office actually do? Anything? It can’t be much if Forte is the sheriff, because he is a worthless dipshit.

You would if you were black.

Did he leave his full-time course work at UMKC to promote her? Or do that remotely as well?