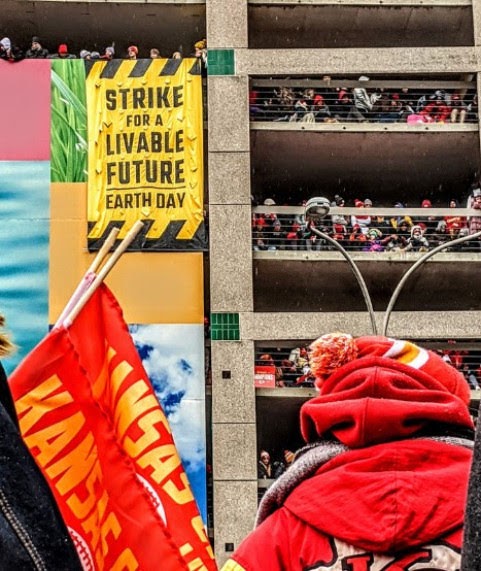 MSM worked diligently to keep politics out of the parade but here's a glimpse at environmental advocacy directed at fans who might or might not have noticed . . .

Kansas City, MO -- Around 1 million people, or roughly half the population of the Kansas City Metro area, were greeted with a giant banner reminding them to “Strike for a Livable Future” this coming Earth Day. The crowd gathered for a victory parade and rally for the Kansas City Chiefs, who won the Superbowl for the first time in 50 years last Sunday. Young people with Sunrise Movement Kansas City dropped the banner at a parking garage on Grand Avenue along the parade route, drawing the crowd’s attention to mobilizing for action on the climate crisis. The young people also canvassed and passed out flyers, reminding attendees they’ll need a crowd of a similar size on Earth Day if they want to win action on the climate crisis from their representatives.

“The Kansas City Chiefs have won our city a great victory for the first time in 50 years and this gigantic crowd has plenty to celebrate,” said Lily Cosgrove, a 22 year-old music major at The University of Missouri-Kansas City. “ Today, we’ve proven we can take to the streets. Let’s turn out again on April 22nd to win a Green New Deal. Let’s not just win the Superbowl, let’s win a livable future. We’ll see you on Earth Day, Kansas City.”

April 22nd, 2020 marks the 50th Earth Day since it was first observed in 1970 and kicked off a wave of environmental legislation. Young people around the world are ensuring this year’s celebration will be the largest climate strike in history. Like previous strikes in September and December, young people will walk out of their classrooms and workplaces to demand world leaders stand up to fossil fuel billionaires and take action on the greatest crisis of our time.

Kansas City’s Earth Day climate strike is being planned by Sunrise Movement KC in coalition with a number of other groups. More details will be announced soon.
############

But maybe not as noticeable as the Budweiser signs.

Not sure if the drunks noticed much today.

This area of North American has been covered by ice, water and jungle. Long before the naked ape put anything in the air. Wake up people it's a left wing tax scam.

Good. The movement is afoot and will not be denied.

Back in my day we fought for the right to not to become brainwashed idiot consumers like today's activists are.

Well then die off already Boomer!

When you've got a degree in gender studies and a huge student loan debt, your only option is to go to work for George Soros and Tom Steyer. A pawn of the rich ecoloonies.

In the Green world the possibility of any Sports is completely gone. Like our economy, enjoyment of life and the world as we know it.

Walking out of school and banner drops really do a lot to address an issue like climate change.
Why don't these clowns try reducing their carbon footprint by holding their breaths?
A few hours for starters.

I've said it before, good for these kids doing something today other than getting drunk. That's what everybody else was doing.

Only kool aid sucking loons think SJW is a paid position. But so what if it were? Don't professionals advocate for all kinds of things? Other than you hate science WTF is your point??

Why do you hate science?

Because you just can't imagine any way science could be real, even as you refer or science. How the hell do you think you know about the history of America??? Science you double talking dumbass.

Because science is a huge conspiracy. And your only evidence of conspiracy is ... ... it gives you butthurt.

The climate is changing. That is science. Assigning blame for it along political lines is science fiction.

These right wing science haters tongue and to save sports from climate breakdown. They just want their short term self interest.

Lily the music major will remember this with pride while she waits tables the rest of her life.

Oh Damn busted by the the purity police! Now we have to let our grandchildren starve in the climate meltdown because we are not perfect saints. Sorry kids the wingers hate you that much.

You are a liar. Climate science is fully peer reviewed just like any valid science.

These GREED NEW DEAL dummies are pawns and posers for AOC, Soros, and too many other dirty deeds Democrims WHO AREN'T LIVING SIMPLY AND GREEN THEIR DAMN MONEY-GRABBING SELVES!!!!

Yeah, get some more tats, dye your hair every month, grab your Starbucks in a paper cup and go holler out hypocrite shit on Earth Day!!!!

Purity police strike again!! The climate Chris is is caused by toxic billionaires and their lying media propaganda companies, not by normal people. You are just the billionaires servile little bitch.

The climate hoax is just another way the commie democrats can destroy us and our country economically after all the commies have been trying to destroy us for a hundred years right?

^^Wrong. But then again you're a worthless piece of shit, so I can imagine a lot of people are trying to destroy you.