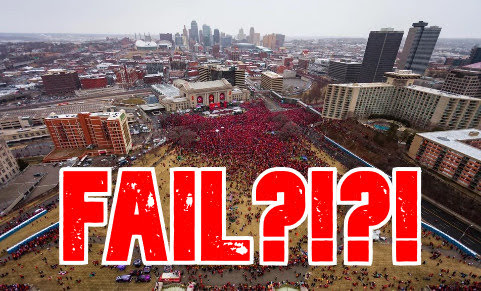 Super Bowl glory is lone gone but the debate over cash and Kansas City politics persists.

A word from an AWESOME TKC TIPSTER on a recent bit of 12th & Oak budgeting . . .

"So if you work for Jackson County you get paid time only if you like cold, football, and large crowds."

Accordingly, here's a look at dox from the Courthouse showing how Jackson County is going to spend some of that property tax influx cash . . . On football partying, apparently. 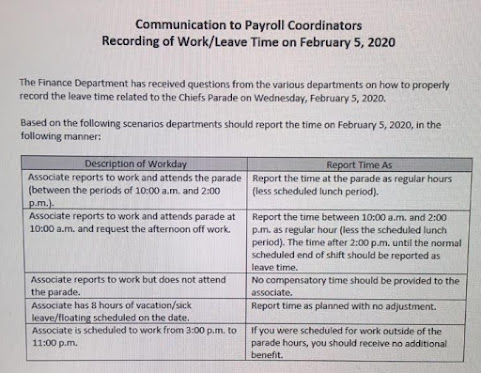 Remember that the Kansas City Royals World Series Championship Parade cost taxpayers about $350K but this time around there were way more police, the crowd was rougher and suffered worsening instances of crime. Sadly, City Hall has been slow to share cost deets with the media and would rather hide the taxpayer information behind the newspaper's paywall.

Jackson County did declare it a holiday. Didn't know it was a paid holiday. Sad.

The county budget has always been mostly a fantasy and one of the most corrupt in Kansas City. There are multiple payoffs to political cronies and friends of the administration. It's the true feeding trough for the county.

But here's the secret, the new people in the administration aren't changing that, they just want to make sure their friends are getting a cut, that's why there has been so much infighting there. One of the many reasons.

Jackson County has the best government money can buy.

The administration always makes sure their cheerleaders are paid well, which is more than I can say for the Chiefs.


So this means Jackson county workers got paid for supporting a parade where the focus was on criminals that broke the law by drinking on the streets and not being family friendly like they are suppose to be.? I think that parade should have cost nothing it was a nothing parade and the chiefs didn't deliver to their fans but instead acted like idiots and the drunks they are. Oh and, got by with it, while the police looked on. Like I said before football and the NFL are for hardcore trashy people.

Hell the county throws millions at the Chumps every year and you bitches are whining about a few workers getting fucked and a few hundred thousand in money paid out to those watching the parade who more than likely went home or to a bar.

This is outrageous. Front line county employees got paid 4 hours to "attend" the parade. All on our dime. Outrageous waste of money. It is time to start seriously talking about doing away with the county as a governmental entity.

It’s not like the chiefs win the Super Bowl that much, Jesus people, relax already.

No, I don’t work for Jackson county either.

What you should really be mad about is the little amount of time that upper management in kc and Jaco actually spend at work throughout the entire year hell, Frankie boi is out golfing all the time and q, he’s too busy traveling and taking selfies to do any work. There’s the real problem right there. Just because they threw the plebs a bone doesn’t mean they’ll evar do it again. After all this whining the real workers will probably nevar get to do something like this evar again...... but that won’t stop Frankie, Q and all upper management.

Says the guy at 12:30 who lives in Johnson County and it wasn't a waste of his tax dollars.

Lighten up Francis...I do live in Jackson County, and this one off event is the least of the local Gov't worries. Potholes, crime, services, not pissing away funds on (recurring) art events. Sure the parade was a waste in many respects, but that is behind us -- need to focus on issues and hold these clown accountable.

1:05 I think the thought intended was to show the waste by the country day in and day out while pointing out unfair practices. As a rule those who could care less about what it costs are those who have no stake in the matter. As a property tax payer of Jackson county I do have an issue with it. Did workers of Cass,Clay or Platte counties get the same deal? After all they can be residents of Kansas City Mo just the same as those in Jackson are.

"This is a horse-shit town. No one will ever do any good here."

The low level workers are getting like 10 dollars an hour, so I'm not worried about them. High level "workers" took a break from finding ways to be criminals, so I'm good with that too.

The Chiefs cost a thousand times that. It's time to start seriously talking about doing away with the CHIEFS and ROYALS as a governmental entity.

I'd like the Chief to take his supposed increased crime stats during the parade and compare it to any other day for the same area. I submit that despite the several hundred thousand more people downtown the crime was no worse than a normal day.

This is just more muckraking from the haters.

You got any statistics to prove there was more crime at the Chiefs parade?

Yeah I didn't think so.

Yet another TKC Totally Unsubstantiated Claim.

^^^ You sh*tbag jerkoff. The KCPD Chief laid out the stats, TKC posted them in this very article. You should be slapped across the ass with belt for your stupidity. Only problem is that you'd like it.

Agree with one of the comments here, the county workers who got the day off was a one time event in 50 years. Good for them.

It past time to #FIREFRANK

Tax payers pay for stadiums, Power & Light, One Light, Two Light, Casino's, shitty cable and cell phone service and Libertarians want a piss about somebody getting a payed day off.

did kc workers get the same deal??