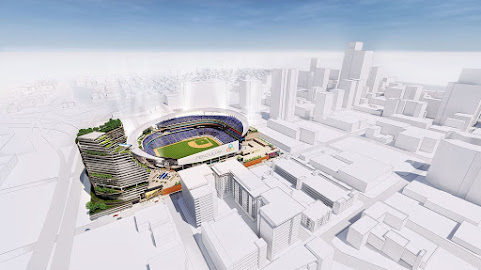 So far corporate media has only promoted the words of boosters and fanboys when it comes to the consequences of a Downtown Kansas City baseball stadium.

Now, FIRST ON TKC, we've got EXCLUSIVE INSIDE WORD from LOCAL POWER PLAYERS who are more skeptical of this project not only because of EPIC taxpayer subsidy but also given that effect that the development might have on lower-income and middle-class residents.

The basics on how this project endangers every resident of this cowtown . . . 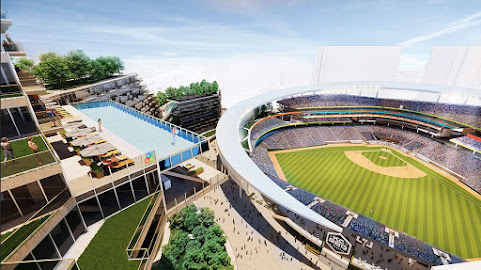 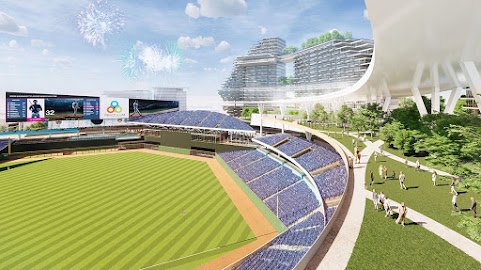 Even supportive baseball park experts find it weird quizzical that the new stadium is smaller and actually offers less access then The K. 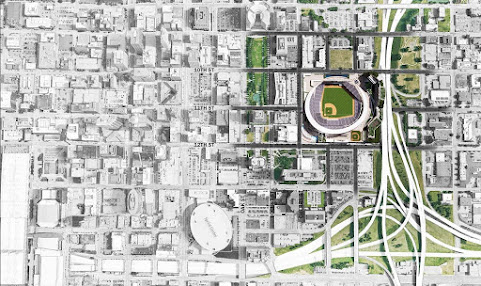 "This isn't just about downtown. The gentrification impact of a new luxury stadium would be MASSIVE and extend across the metro area. We're seeing requests from more luxury living space and development sparked by this project and the only way it works is with high-end rents starting at 2K-a-month.

"With the team in its current position a thrifty family can go to The K for less than 100 bucks if they sit in general admission. Those days are over with a Downtown stadium . . .

"We've seen the same thing happen in Denver, Phoenix and Minneapolis. The rents don't just rise near the stadium, there's a ripple effect across the city because the post-downtown-stadium real estate market becomes inflated overall. So what voters should understand is that this stadium isn't just about new downtown development, it'll threatens to raise their taxes and cost of living again." 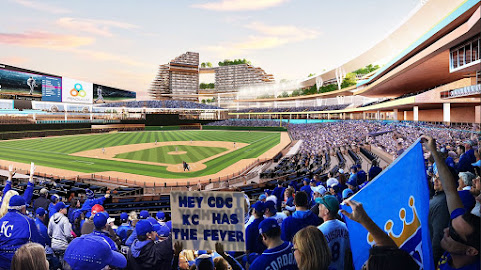 Meanwhile, as Coronavirus threatens the world we think it's odd that one of the promotional photos features a note: "Hey CDC, KC Has The Fever" as this town mistakenly suffers the fevered delusion that sports glory will benefit homeowners.

This has always been the plan. It just hasn't worked so far. Sprint Center and P&L district wanted to drive out the low income residents of downtown, so far they've only moved them away a few blocks. The new drawings were just too obvious in what KC is really looking to do. Make downtown a bustling hub again, just not sure another billion dollars will do it if the team keeps losing 100 games a season.

The buck stops with homeowners, that's who they've got over a barrel. Companies can jump back and forth across the state line. A lot of residents are stuck.

Looks like a good time! Much more fun than more streetcars and coffee shops.

Probably won't ever happen. The Mayor won't be able to flip flop or spin his way out of this and if voters even get a hint of the cost they'll recall the entire city council. The plans are great but they're just nice drawings and a few vague comments from the developers. Really doubt they're able to realize this. Cheaper just to remodel the K again.

This is the best argument FOR downtown baseball I've seen

This is going to happen. Deal with it. It will great for the city. You can't stop progress and this is what the people want. Not you people, you slugs don't want anything, so you will never be considered. The rest of us understand what progress looks likes and are all for it. See you at the groundbreaking, well not you slugs, but you know what I mean.

Everything will go up in cost. Taxes everything. Then what will happen to the K? Tear it down I guess nobody else will be able to operate it minus any huge amounts of tax dollars. Typical Kansas City idiot thinking, Lets tear something good that works down and replace it with something that costs more to operate and run while in short not improving anything.

Yes another billion in debt added to a city that's in a $1.6 billion financial hole.

When you don't even live in the state or city of the project in question, your opinion is not worth a thing, "Super" Dave.

If turning the ghetto into a livable community is gentrification, so be it. Grow or die.

If Dave's opinions on KCMO issues are worthless just because he does not live in the city, then you should not be commenting on anything that happens outside your mental ward.

Unlike fine wine, a dumb idea doesn't improve with age.

Are you new here? If they want it to happen, the council will make it happen. The residents are too stupid to recall anyone and will likely just keep voting to raise their taxes.

As I understand it, the same guys (Robbie Mook) who produced the "APP" and the Iowa Caucuses are available to finish the New Airport and start on the New Stadium. Why take chances? Get those guys involved as quick as possible. Maybe we will get our doctors and health plans back too!!!!

They are saying, that actually, costs will go down. So..., there's that.

"Obama Care Stadium". Very nice. I am optimistic that this is the answer to all of our problems. Should get the murder rate down too.

^^What about Trump's beautiful new health care plan? Well if you can find it that is.

Why would you want to keep homeless in the downtown area? Why keep a blighted area? Gentrification is a catchword against improvement. Get a grip, the times are a changing, but a downtown stadium is stupid. Where ya gonna park?

Power and Light district still costs taxpayers 15 million a year. It has never paid for itself....20 yrs later.

If the stadium is going to have this effect, then I'm all for it.

The best way for KC to keep property taxes and cost of living down would be to:

1.Demolish the plaza and replace it with a landfill accepting nuclear waste.

2. Buyout the leases for the Royals and Chiefs and have them move to another city.

3. Let the current airport run till failure, and then some.


Come on TKC scholars, lets get organized to get this done! The petition process begins today!

All that typing to show you have no ideas about the future, and a gross stupidity about the present.

@12:57PM-Why don't you have anything better to do? that was terrible.

Sports teams expect taxpayers to pay for their stadiums even as they reduce the number of affordable seats to make room for luxury suites. Of course give Jackson County and KCMO politicians two of those suites and see how fast they forget about their constituents.

10:31 is a loser, the kind of loser who has not ever had an original thought or structured factual comment about anything but regularly attacks those who do under their names or the names known by.

10:31 is such a loser, they are too embarrassed for you who live around here to even know who they are for fear they'd fall victim to their own shortcomings. That or they work at 12th and Oak.

10:31 is probably a full fledge democrat who fantasizes about a relationship with Pete Buttigieg.

Forget a downtown ballpark idea, it would make the killing of innocent people to handy for the killers walking and cruising the streets of Kansas City MO. KCPD can't protect you as the parade last week proved. But parades in Kansas City are only drunken football brawls based on a bunch of drunk football players

The city of KCK needs to petition the city of Kansas City MO to change their name as they are not in Kansas and are tired of people mistakenly thinking they are. It's really very embarrassing to them to be grouped with such a crime ridden over taxed place.

Sometimes Kansas City Mo residents are a little bit country and sometimes they’re a little rock ’n’ roll but mostly they are to lazy to vote a decent government into office but come out by the tens of millions the city claims to see drunken football players pour beer on one another. Trailer trash comedy and behavior is king in KC.

Easy to tell when you have met people from Kansas City MO as they are the ones always bitching about killings and the weather.

Kansas City MO likes to think they have a lot of jazz snobs but truth be known half the metropolitan area couldn't find 18th and Vine in a week and the other half think Charlie Parker plays for the Lakers.

Only in Kansas City MO do the residents know the current murder count but have no idea when the tags on their car expire.

Only in Kansas City Mo do you see more cars with expired temporary tags than you do cars with legal tags displayed.

Kansas City Mo boasts as being the town with the most Mayors who have failed while in office. One was so bad a car wash they owned failed in a city where car washing is more important than washing the clothes you send the kid to school in.

Kansas City Mo the only town known to wash clothing worn by students while in class as the parents are too lazy to do such. The kids might be too stupid to get a fast food job but hey they have clean clothes.

Kansas City Mo where the kids sit in class naked while the teacher dose their laundry.

Put back up the Paseo street signs first.

Oh, Chump Chimpy/10:31 & 11:06, you're just a mooch monkey living off of the taxpayers in a stinky cage! Nobody listens to you. Get back to playing hide the welfare bananas!

Can someone explain why gentrification is bad?

Now that the "trial" is over, we return you to your regularly scheduled class war.

@1:54PM-Stupid dave. Stop talking about KC! You don't live here! Nobody wants to hear a retard's version of a city he doesn't even live in! Next time you respond to this, have the balls to affix your name retard. We know it's you!

"Next time you respond to this, have the balls to affix your name retard."

Says "Anonymous." Who apparently has never heard of irony.

The prices of the homes increase both due to demand and due to improvements both to the homes and the infrastructure. The subsequent increases in property tax are perceived to be bad. Home ownership often increases and increased concern with property value often increases. Home owners with an interest in property values are also interested in the neighbors and the neighborhood. One of the consequences of "gentrification" is increased calls to 311 and increased enforcement of code. For lack of a better description, the white trash is upset they cannot park on the grass... cannot park on the grass due to the gays (and the lesbians) improving the neighborhood.

Oh, boys. Seems you are missing football, and have a bit of speculatin' time on your hands.

If KCMO tries to build a stadium, the residents of Waldo will revolt--and dig a downtown moat in the city's streets almost as large as their potholes.

I'm not really worried. But Phillip Klein and I stand at the ready, to defeat ANY bistate tax efforts. Again.

^^^ Advertising without payment to the blog owner. Delete. Stupid self promotion, not information. Tracy knows NOTHING about waldo and is clinging to victories from 20 years ago.

Maybe we should fix the potholes FIRST!

Hey 3:20 that sound you here is Darwin coming to get you.

Of course Tracy wants to continue to be a JoCo freeloader, while reveling in the Super Bowl win!!

When she's in DC at her conservative cult forums she says she's from Kansas City!!

HI I LIVE IN SHAWNEE AND HAVE AN OPINION ABOUT KANSAS CITY. PLEASE IGNORE ME.