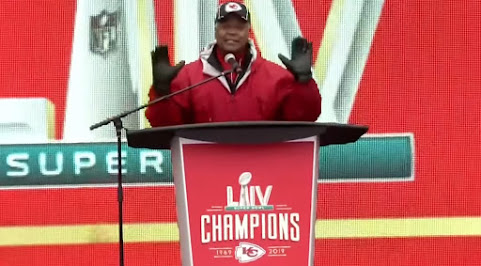 Amid rising property taxes and growing frustration with local government there was an important bit of political push back documented yesterday and now up for debate . . .

There's a persistent myth that the Exec retains "popularity" from his playing days but years of scandal leading the courthouse seem to have depleted the love of many sports fans.

Audio from the scene is inconclusive, check the WaPo livestream of the event at 2:20 and notice the Exec getting a little flustered as he begins his remarks.

Moreover, announcer Mitch Holthus forgets his title and introduces him as "administrator" and not Executive.

We reached out for comment and here's word sent back our way from Courthouse insiders . . .

"Yes, the crowd was more interested in current Chiefs players and that's understandable. Listen closely and you'll hear people yelling out "Chiefs" not booing the Exec. In fact, he greeted hundreds if not thousands of people during the day who remember the 1985 World Series Championship fondly, took pictures with the Executive and expressed their admiration. Some of your readers are mistaken TKC, Frank White still has a very strong base of support and fans remember all that he as done for Kansas City."

They boo'd him and a lot of people were also flipping the bird to quinton.

Sure Franks supporters are going to say there was no booing taking place. I mean come on do you think they are going to stand up and say yes there was booing and the public is very pissed off at Frank right now?

I was there. He got boo'ed.

Not even in the world of Ebonics, do the the words "Boo" and "Chiefs" sound alike.

I was one of the people booing. The Governor got booed too

“Frank White still has a very strong base of support and fans remember all that he as done for Kansas City."

The only supporters of Frank White are people who don't pay property taxes.

Screw those crooks and thieves at Jackson County government.

For the record, I certainly did boo Frank White. Not sorry I did either.

I'm sure a million Chiefs fans woke up yesterday and said, "Gee, I'm going to Union Station to hear the politicians tell us how great the Chiefs are." Hell yes they got boo'ed.

Fuck no, they went to see Mahomes, Big Red and the Kelce show.

Frank gave the worse public speech...as usual.
People all around me boo’s him...one called him a coattail leech... which I found amusing.
While he isn’t like much for many different reasons...he had it coming since he didn’t belong at all.
Frank White was boo’s and should move to California and join the homeless and not worry about mortgages.

Let’s start a fund to give Frank a million dollars to leave KC for good.
Maybe ask the Royals to erase his name from everything.
John Mayberry was so much better- even Paul Schall was better.
Frank got lucky cause Patek helped him.