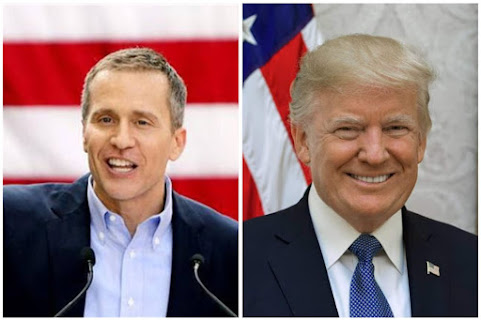 More than just hot mic "locker room talk" about grabbing ladies, former Missouri Guv Eric Greitens resigned in disgrace after scintillating allegations of one of his encounters made it impossible for him to hold office with any credibility.

The talk of a Greitens comeback could ruin reelection chances for Guv Parson - A respected but boring politico who was the only man who could restore integrity to the office in the aftermath of a nationwide sex scandal.

Now, rather than letting right-wing opponents cannibalize themselves, our friendly local Democratic Party denizens decide to make a brash and bold stand.

Here's their latest note with a TKC highlight of the most scathing passage:

The Missouri Ethics Commission levied a fine for more than $178,000 for two significant campaign finance reporting violations against the Greitens for Missouri campaign last week, one of the largest fines in the commission's history. The fines were largely based on failure to report in-kind contribution and coordination with two other groups, LG PAC and the phony non-profit A New Missouri, for media buys, polling data and unreported travel. The disgraced former Governor who resigned amid sexual misconduct and blackmail allegations along with serious threats of impeachment from the Republican majority has 45 days to pay a reduced amount to settle the case.

Despite this massive fine, Greitens made a triumphant return to social media and St. Louis news outlets claiming, "It's good to have been exonerated, and I'm glad to have been vindicated... They launched this attack because we were fighting for the people of Missouri."

Greitens has a history of taking pages out of the Donald Trump sociopath book and this is no different.

He has taken a giant loss and spun it to be a win while accepting no responsibility and demonizing his opponents. These public statements which include new purchases of ads on Facebook and his first Tweets in nearly two years has ignited the flames of speculation: will Eric Greitens crash the Republican Primary for Governor or is he waiting for something else? His campaign account still has several hundred thousand dollars sitting in wait and raising money has never been his problem. We'll wait and see.
######

Most people will pick "boring" over Greitens or Galloway any day.

Fuck off, pansies.
Eric is HOT! And more man than any of them could handle.

Mike Sanders, Sheriff Sharp, Frank White, the list could go on and on of corrupt Jackson County democrats. Put out press release talking about your corrupt democrats.

What they fail to mention is greitens was found innocent, I apologize for not remembering exactly what it was but he was found innocent of those charges, I think it was his campaign they found guilty, that’s why he’s been exonerated. It was on Pete mundo last week and he also said he would not run against parsons. The dimwits are doing what they do best, running smear campaigns against a guy they know they can’t beat.

The Missouri Ethics Commission is anything but ethical. Their job is a bi-partisan effort to squash anyone the Republican or Democratic establishment does not like. Any complaint filed against a political insider is usually dropped while anyone outside the establishment gets hammered.

Instead of the liberals/democrats attacking everybody else it would be nice to see one of them list what they like about the Democrat party.


Sorry folks but Grietens is NOT a republican is is a lifelong democrat all of his family members are life long democrats. He ran under the republican party and fooled a lot of people.

^^^ Better get a flu shot; you sound delusional.

The most interesting thing about Eric Greitens - is his face.

It is so, fuckin weird.

(((Greitens))) gave the cyber-security contract to all Missouri state colleges to an Israeli company. Last I checked, Israel was a foreign country. Fuck (((Greitens))).

Thank you, chuck. I have thought this many times looking at Greitens' sociopathic stare of contempt. Just didn't know the name for it.

As for Shields, she was acquitted of fraud--she and Phillip were scammed by their realtor. Not her fault. Not her crime.

As I wrote here last week, Greitens is like Hubert Humphrey, you'd have to drive a stake thru his heart to keep him from running. It just won't be governor. Too toxic. But he WILL run for something.

Still teaching college in the Ozarks?

Apparently, from past comments, some folks think Tracy is smart. Her above comment disproves that.