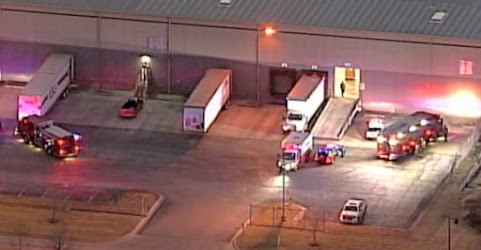 "The incident happened around 6 p.m. at 1010 North Century Drive, which just south of Front Street and just east of Interstate 435. KCPD confirmed that emergency crews responded to the scene, where the unidentified man was pronounced dead. The man who died was a contractor working on the conveyor belt, according to the Kansas City, Missouri, Fire Department."

KSHB reported that the man was alive and being given CPR and was taken to the hospital with life threatening injuries. Apparently he is not dead, yet.

UPS works those people hard. a driver told me if it weighs less than 140 pounds they have to carry by themselves ... that is a freight shipping with 2 strong men delivery, in my opinion. this was one i saw delivering a heavy package and i just asked him about it (and helped a bit, not just delaying a working man with a conversation) I guess this is what we want when we have all the online shopping, a ton of not-very-well-paid delivery minions who wear their bodies out dragging the shit to our porches etc. and in this case sacrifice their lives for it. they have a union but a shit contract obviously. the poor family.

This was a contractor, not a UPS employee. Also, UPS drivers get top rate pay in 4 years which is about $36/hr. With overtime the average top rate driver makes about 81K a year(to drive a truck and deliver/pickup packages). Yes it has its challenges and isn’t an easy place to work, but nobody is being forced to “sacrifice their lives”. The job market is great, change the channel if you don’t like what’s on

This was my 24 year old brother. Regardless of your opinion please remember my family is devastated and your negative comments are not helpful in any way. A mother lost her son, siblings, their brother and our children lost their uncle

11:42 - so very sorry for your loss. Prayers and thoughts go out to you and your family.

I am so sorry for your loss. I do Maintenance as well and the community is shocked and saddened by this. Someone needs to be held accountable, he should not have been alone. 😓

Sad situation. Prayers for the family and hope that this facility becomes safer for the workers. There needs to be more followup from the media and a serious look at practices from OSHA.