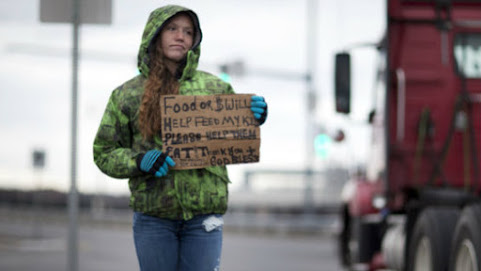 A bold statement and a controversial juxtaposition betwixt people and trash . . . We've highlighted the passage that is typically rejected by locals but now deserves another look . . .

Northeast News: "Revisions to Kansas City’s panhandling ordinances were attempted a few years back under the guise of pedestrian safety, citing the number of panhandling complaints registered with the city.

"Those revisions would have made standing on a street corner asking for money nearly impossible.

"The ordinance failed to pass a majority and died on the 26th floor of City Hall . . .

"So to that end, when will the skyrocketing transient issue be classified as the environmental hazard that it is?

"At what point does the ecosystem in and around these camps become hazardous?

"With a new Mayor and City Council, to revisit the issue in an attempt to clean things up a little not only for the safety of the general public but for the environment at large."

Oh sure Tony, homeless people are the environmental problem. Meanwhile we let big polluters, with their wholly owned media and politicians, burn the environment and climate to the ground. Tony, how long do you think people can survive on earth after the oceans die?

KCFD will begin hosing them down on a regular schedule to help out.

I think commenting that the comparison was controversial was the whole point of linking the NE news editorial, please learn a little reading comprehension @4:52.

I thought the Super Bowl win was going to solve all of these problems.

I think both the North East news and tkc are forgetting that the current mayor voted against the panhandling ordinance along with the majority of the Urban Corps vote in the 3rd and 4th District. If there's going to be any progress, we need to talk about developing a real solution with the districts where the problem is the worst. Clogging City Hall with more garbage legislation is just as bad as garbage on our streets.

We will be extinct far before the oceans

I thought Trump was going to solve all these problems.

If your homeless in K.C. you should be hired to pick up trash for minimum wage so you can contribute to the city! Anyone that can walk can pick up trash and get paid to do it! Then from there either get into mental health services programs,substance addiction program and job training programs!

Who cares what you think Greebo, you sycophantic piece of shit.

Maybe a bunch of SJW Tourists can load up some free food over in their safe neighborhood in JOCO and come over and feed the criminals in an area of the City they would never go in a million years. Take some selfies for their friends and then disappear back to JOCO and leave the local residents of the neighborhoods (like me) to deal with the criminal element that is now fat and sassy and ready to plunder. Oh wait, I guess Free Hot Soup already has this plan covered. My bad!

Parasite won best picture, so many it is the year for the homeless by choice crowd. We are the suckers who get up everyday to work and pay the taxes that end up as their salary.