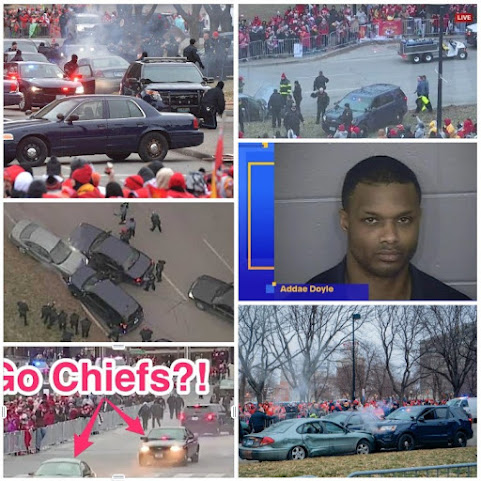 "According to charging documents, 42-year-old Addae J. Doyle struck and knocked down multiple barricades at Front Street and Riverfront Road around 8:13 a.m. then continued south on Grand, which was also the parade route . . .

"The probable cause statement said officers found a substance that tested positive for methamphetamine inside the vehicle.

"When investigators spoke with Doyle, he told them he did not remember what he was doing when he got arrested. He said the last thing he remembers is getting high then police pulling him out of the vehicle by his arm.

"He now faces one count of resisting arrest, possession of a controlled substance, driving while intoxicated.

JPB will not prosecute.

He's hot. I will post his bond.
I need a date for the weekend.

Obviously he knows how to party!

The Chiefs won the Superbowl AND it's Black History Month. The combination was just too much for the lad.

"Month" sort of sounds like "meth." Maybe he got confused.

Nothing like schools having a snow day so the students can watch jocks getting shitfaced atop a bus. Muh hypocrisy! What's D.A.R.E.?

^^^^Awww does you pussy hurt you triggered bitch? Go rub some lotion on it.

You know it says a lot about where you live when all you hear before this person was ever identify as the driver was it has to be a couple of black people who were in the car.

Hope Jean P-B was able to let him out to get back to Grand and see the parade, albeit from behind the barricades.

On meth the parade route looked like the sea parting . Just had to follow it to the promised land. Party on dude.

JPB is dating him?

The police handled it perfectly, but were also lucky. This could have a tragedy with many killed.

Snipers weren't ordered to take out the driver, which would have likely caused the vehicle to go completely out of control and veer into the crowd.

The biggest take away in planning is finding out why weren't there concrete barriers blocking all access points to the parade route. Trash trucks or buses could also be used if necessary to block roads.

No vehicle should be able to get onto a parade route. I'm assuming DHS was consulted for terrorist issues. Blocking the route access is security 101. So why weren't they blocked. Crowd control fences don't count. Those don't stop cars. So what happened?

Damn lucky it wasn't a terrorist driving into the crowd like they have done in France and elsewhere.