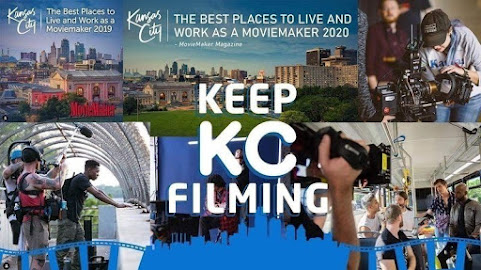 Our blog community was FIRST to notice the cuts targeting the arts community in the current budget and now aspiring cowtown movie moguls have started a movement to save the Kansas City Film Production office.

Two sides of this story:

Yes, Kansas City needs to tighten its belt and reduce spending on efforts that don't benefit public safety and infrastructure across the entire community.

The current budget still finds room for corporate welfare subsidy and sketchy tourism efforts that have never been accurately documented.

Small pet peeve -- TKC admires local MOVIE MAKERS but nobody has made a "film" in Kansas City for years. All movies and cinematic efforts are shot on VIDEO. But I digress . . .

The most important fact to notice . . .

The Kansas City movie making community is a vibrant collection of creative and HARD WORKING professionals who struggle to share their vision with Kansas City. Help from City Hall often directly creates the opportunity to create bigger budget productions, the cash goes right back into the local economy and not only sparks more investment but also contributes to this town's image as metropolitan area serious about crafting professional images.

Kansas City Film Production needs your help NOW! The Film Office & Incentive Program are scheduled to be removed from Mayor Quinton Lucas’ 20/21 budget proposal. The program costs the city very little to offer a program which brings in an annual cash flow of $10 million in revenue. We have until March 15th to collect 2,500 signatures (from anyone in support of this movement regardless of where they live) and get this program reinstated into the budget.

What is the film incentive and why is it important? The film incentive offers qualifying productions assistance if they spend a minimum amount of money in the city and hire local crews. These incentives help our city to bring large projects like Netflix’s Queer Eye Season 3 and 4. The total budget that would be cut is a mere $175,000 for the incentive and film office. This revenue helps bring in productions which have an impact of over $10 million in revenue to the city annually. These productions also showcase our city which has a direct link to an increase in tourism.

This is not a partisan issue. This is about keeping great film projects in Kansas City which create jobs and boosts the economy.

Please help us by signing and sharing our petition showing Mayor Quinton Lucas and the City Council how important this is to so many and needs to be included in the 20/21 budget.

“Every once in awhile you connect with the kind of film commission that makes an extraordinary contribution to the success of your project...KCMO will always be Queer Eye’s home.” -Jen Lane, Showrunner - Queer Eye (Netflix)

“Twenty-five years of working in television, I’ve shot in every state in the United States and almost twenty countries, and I have never had such a trouble free production in my life.” -Eric Streit, Executive Producer
###############

And all of this inspires our movie song playlist tonight . . .