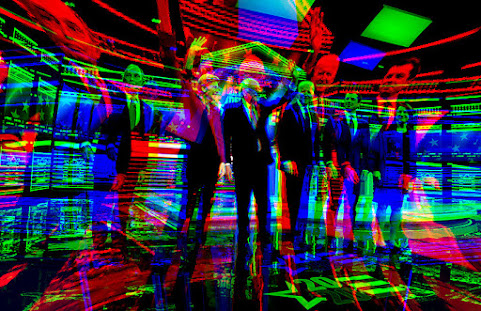 As always we turn to our blog community for unique perspectives and insight into the underground discourse that will ultimately determine the fate of the nation.

HOW DID THE DEMOCRATIC PARTY 2020 DEBATE PLAY IN KANSAS CITY??? WHO WON & CAN THEY BEAT PREZ TRUMP???

So far it looks like they're doing a very good job destroying the political career of former NYC Mayor Mike Bloomberg.

Of course we'll see a few whackadoodles in the comments but, occasionally, there are comments worthy of consideration.

From the opening bell, Mike Bloomberg faced fierce attacks from his Democratic rivals over race and gender at Wednesday night's high-stakes debate in Las Vegas as the former New York City mayor faced off on the debate stage for the first time.


The One With Bloomberg-Yet Another Democratic Debate Liveblog

How many debates is too many? In 2015 the Democratic National Committee concluded six to be a "reasonable number," enough to give candidates ample airing without diverting from the party's bylaws. Yet there's nothing reasonable about this year's all-out Democratic brawl, egged on by a constant drumbeat of debates, which have now ballooned to 12; six are crammed in the first quarter of 2020.


George Zimmerman sues Warren, Buttigieg for $265M, accuses them of attempting to garner black votes by defaming him

George Zimmerman, the onetime neighborhood watch volunteer who was acquitted in the 2012 shooting death of Trayvon Martin in Florida, is suing Sen. Elizabeth Warren, D-Mass., and former South Bend, Ind., Mayor Pete Buttigieg for $265 million, claiming both 2020 Democratic presidential candidates defamed him in an attempt to "garner votes in the black community."

U.S. Sen. Elizabeth Warren, D-Mass., wasted no time to unleash a brutal attack against former New York mayor Mike Bloomberg for sexist comments he made before running for president. In her opening remarks at the Nevada Democratic debate, Warren called Bloomberg an "arrogant billionaire" who demeans women.


Bloomberg the early focus at the Democratic debate in Nevada

The 78-year-old former Republican was making his debate debut as one of the Democrats' strongest six White House hopefuls -- as determined by national polls -- while the party's moderate wing struggles to unify behind an alternative to polarizing progressive Bernie Sanders.

Former New York City Mayor Michael Bloomberg said Wednesday there is zero chance Sen. Bernard Sanders can beat President Trump in the November election. "I don't think there is any chance of the senator beating President Trump," Mr. Bloomberg said, taking issue with his support for Medicare for All.


Six Democratic Candidates Take The Nevada Debate Stage Tonight at A Crucial Moment In the 2020 Primary Cycle. Follow Along Live

Six candidates will face off in Las Vegas ahead of the Nevada primaries. Follow along for live updates.

and this is how President Trump gets reelected in a landslide.

From what I've seen so far it's just a debate concerning the Democratic Party. Nothing about the American people. Classic mistake and something that looks horrible for everybody involved.

These losers might not seem great but they're better than government by tweeter in Chief.

I like the effort TKC but If I can offer just one piece of advice. Please delete anything from Byron as he regularly tries to hijack these threads and makes them about himself and not the issues.

Bernie already won and will CONTINUE to expand his lead.

Meanwhile MAGA would rather watch the Kobe Bryant special than any of this.

The Dems are toast. Never seen so many unrealistic candidates. Pretty sad really.

8L37, I limit myself to one comment per thread.

You're confusing me with Chuck.

But, more importantly, why are you thinking about me?

Wow, does anyone really watch?

Yes, this is the real debate on who the next president will be. Not Drumph!

Hey Byron, you idiot. Considering you have been fraudulently leaching WELFARE for most of your adult life, I dont think you should have a vote! That is our tax dollars you are stealing! Faggot!

Farmers, truckers and factory workers are smarter than you think. They know that they have a better shot of getting good health care with these losers than the clown who took it away. It's not about love, just getting the best deal.

Vote your interest, not for a personality contest.

And you wonder why so many liberals have left the party. You wonder, me not so much.

How exactly did the "clown" take it away? I still have mine. Even after old yellar got in office.

Latest episode of the biggest loser.

What's with Bloomberg's brown teeth? Has he been drinking too much soda? With $60 billion you'd think he could afford Crest White Strips.

Didn't lose mine either. Also make a really good living, don't have any students loans, no debt, don't need anyone to daycare my kids, don't need drugs legalized, don't need to become a citizen, know that the green deal is impossible, and have the ability to decide on my own the correct bathroom to use. Also, seen how socialism has failed first hand in several countries and don't need a safe zone. Sorry some of you little whiny bitches don't have a back bone, balls or a brain enough to make what I have. Put your pinky back up your friend's ass and keep typing shit.

The Democrats came across as bat-shit crazy Communists. Bloomberg actually was the only sane person on the stage when he said Americans would not vote for Communism (Sanders / Warren) and with Comrade Bernie as the Democrat's candidate it would guarantee four more years of Donald Trump.

Angry Joe Biden looks like he has been embalmed and raised from the dead.

Finally, why should Americans give a rats ass regarding the name of the President of Mexico? Mexico is a corrupt, drug-cartel country with corrupt politicians and that is why its people want to illegally immigrate to the United States. The moderator asking the stupid question over and over should try to resolve Mexico's issues if she is so concerned about Mexico's President. I am sure she is blaming President Trump for Mexico being a dumpster fire all these years.

Trump in a re-election landslide despite the hysteria efforts of the left-wing media at CNN, CNBC etc.

What we learned from the Democrat's debate:

1. Your income and other payroll taxes will go up leaving you a smaller paycheck.
2. The price of gas per gallon for your car and your home heating costs will sky rocket with the elimination of fracking, coal fire plants, excessive regulations on oil companies.
3. The stock market will crash with the raising of capital gains tax and corporate taxes.
4. The government will take over all of health care. If you ever been to Research Hospital here in Kansas City or a VA that is your future health care under the Democrats agenda.
5. Illegal immigrants will flood the United States and the Democrats will give them free everything to buy their votes.
6. There will be no police protection or law and order.

What did we see from the Democrats? They do not take orders from billionaires. Meanwhile the Republicans are bought and paid for by corporations. The Democrats are the true party of the people and they're going to remove a horrible fake leader from the White House. Count on it.

Notice that tonight's strongest issues were about policy and not name calling like the last 3 and a half years with Trump.

Elizabeth Warren is toast. Nobody, especially men, want to hear that schoolmarmy preachy voice for 4 years.

Was interested in seeing what was going to happen with Mike on stage. Went according to plan, it was a fucked up mess. they shoouted over each other and fought like children. Wouldn't trust Bernie, Joe, Liz or Pete to run this country. Amy and Mike are the best of this bunch but Amy has a ridiculous self image kind of like Joe. Shit Joe thinks he knows everything but can not articulate at all beyond "I know this guy and this other guy and we had to move once as a kid."
I agree they are all bat shit crazy! I think Trump won the night.

No reason to give this country built by explorers, pilgrims and pioneers away to people who arrive for welfare.

O yeah...fuck the (((media))) run by a tribe hell bent on sucking every last dollar out of the hard working people and destroying the only civilization worth living in...Western Civilization built by Europeans.

GOP BULLSHIT. Nobody who ever voted for the Democratic Party will vote for Donald Trump.

False flag junk. We see right through you. Trump is fading.

Embarrassing Homelessness with no future plans... getting worse.
High taxes forcing homelessness and others putting the cities in their rear view mirrors.
High crime... and Hollywood attributes-?

As more and more minorities become stronger and realize that Dems just want their vote- they have quit listening to the waning voices of editorial boards and realize liberal policies and socialism is a colossal failure and Al Sharptonism is a menace to everyone wanting a stronger America..

Go ahead and vote for senile Joe or Bernie the Socialist Senior Citizen- or even pencil in Hillary if it makes you feel better- the vast majority of people will ask themselves:

Am I better off now than I was 4 years ago?

JB at 1213...You are wrong Good and thinking people know identity politics and Soros have destroyed the Dems and no amount of empty promises of free stuff will change that.
IDK if you believe me but I am the most liberal progressive, have voted every election, state, local, fed., for 30 plus years all D, I am voting trump.

Wave your rainbow flag and fill your Subaru with $2 gas and think about how fat your 401k is looking. Die your hair purple get a new tattoo good times are here. Wave a peace sign in November as you enter the privacy of the voting booth and place a X next to Trump, no one will know.

^^^^^ Boomers will be the ones you rely on to pay taxes to support Bernies free shit Socialism.