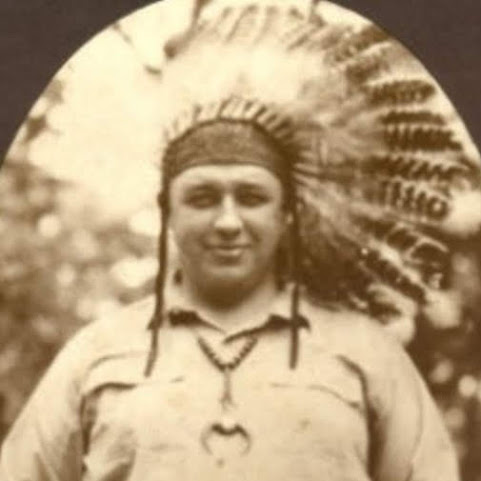 Here's just a bit of cultural appropriation backstory to make this tragic tale even more local . . .

"The Chiefs got their name from a non-Native man. Harold Roe Bartle — a white business man who eventually became a two-term mayor of Kansas City — was responsible for the team's move to Kansas City and its designation after founding the Tribe of Mic-O-Say, a Boy Scouts of America-affiliated troop.

"The Boy Scouts claim that Bartle spent a lot of time with Native Americans on their lands and wanted to honor and incorporate Native traditions into scouting by founding the Tribe of Mic-O-Say, which still exists today. The Author, however, described the group as a "fake Indian Boy Scout tribe." He wrote that according to a "traditional Mic-O-Say legend," Bartle "was inducted into a local tribe of the Arapaho people" and "was also given the name Lone Bear by an Arapaho chief." From then on, Bartle was known as Chief Lone Bear within Mic-O-Say circles, and eventually the nickname "Chief" caught on among people throughout Kansas City."

In other words, the story of "the Chief" was tall tale make-believe garbage that soon found gullible followers.

The Boy Scouts of America filed for Chapter 11 bankruptcy protection on Tuesday in an effort to keep operating while thousands of claims of sexual abuse by former members against the national youth group are litigated. The organization filed for bankruptcy in Delaware early Tuesday, according to court documents.

Always Be Prepared For Court

The Boy Scouts of America announced early Tuesday that it has filed for Chapter 11 bankruptcy protection, saying its goals are twofold: 'Equitably compensate victims who were harmed during their time in scouting and continue carrying out its mission for years to come.'

Major news broke overnight regarding the national Boy Scouts of America organization. The group filed for bankruptcy as it continues to battle sex abuse lawsuits. That filing has many questioning what will happen in the Kansas City area, which is home to a robust scouting program and several popular camps.

The molesters weren't faggots, they were good Christian American Patriots who loved to play golf, vote Republican and play with little boys.

Boy Scouts of America undoing was when they allowed girls and misfits of society to be a part of it.

The liberals have ruined a great american tradition.

And you mouth breathers DO KNOW that the Boy Scouts DO NOT allow homosexuals to be Leaders, don't you?

All the furor from the "Evangelicals" was about the fact that a youth can no longer be barred from joining or be dismissed from membership after admitting to having a homosexual identity.

BOYS SCOUTS IS OPEN TO ALL BOYS!

The molesters in all instances took pains to hide their pedophilia and acted as normal members of Society - very much like you do.

Yet, Notice that in the recent years how all the sexual confused freaks wanted to fight to get into the BS for a take over. Then they could be around their fellow freak molester types. Seems people could connect the dots.

1:22 ^^ I think you are the confused one. The liberals were those freak genders that wanted to fight to get in. Duh el dipshit.