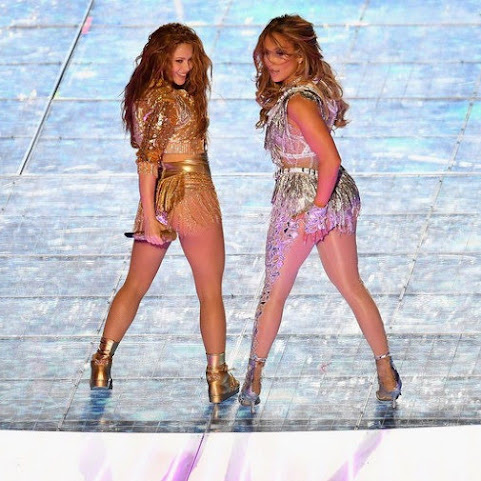 TKC didn't watch it but apparently the reviews weren't great . . . The plebs were critical for entertainment designed to entertain during toilet breaks as is their right for this All-American circus that didn't appreciate the Spanish lesson with their cheese slathered nachos.

Accordingly, we offer this spicy mix of info, reviews and news round around the metro, the nation and the world . . .


Jennifer Lopez and Shakira were too sexy at halftime show: parents

Parents are getting their panties in a bunch over the Super Bowl 2020 halftime show featuring Latina divas Jennifer Lopez and Shakira. Many took to social media to give their own reviews of the performance, which featured Shakira twerking and belly dancing before J.Lo writhed her way around a pole - all on the same stage as Lopez's daughter, Emme Maribel Muñiz.


Vehicle pursuit through Northland ends in crash near Bond Bridge

KANSAS CITY, MO (KCTV) - A vehicle being pursued by law enforcement careened through traffic hitting multiple cars before crashing near the south side of the Bond Bridge Monday afternoon. According to the Kansas City Police Department, officers were alerted to a man passed out at a Northland gas station just after 4 p.m.

KANSAS CITY, Mo. -- Boulevard Brewing Company tweeted Monday that they're brewing up something extra special to celebrate the Chiefs' Super Bowl win. "We've already gotten a lot of questions, so to answer those and preemptively answer any others: YES, a beer to celebrate the big win is on the way!"

GRANDVIEW, MO (KCTV) - Police are asking for the public's assistance in identifying two males after a bank robbery Monday morning. The bank that was robbed was a Bank Midwest located at 12500 S. U.S. 71 Hwy, Grandview, Missouri around 10:10.

NEW YORK -- Missouri native Rush Limbaugh, the most prominent political radio host in the United States, said Monday that he is beginning treatment for lung cancer. Limbaugh, 69, told his radio audience Monday that he was diagnosed with an advanced stage of the disease. He said the diagnosis was confirmed on January 20.

The first-in-the-nation Democratic presidential caucuses in Iowa were too early to call at 8 p.m. ET, according to NBC News. Doors at caucus sites across the Hawkeye State close at 8 p.m. ET. Voters will decide who could get an early boost in the 2020 nominating process.


A second monarch butterfly conservationist has been found dead in Mexico

A smokin' hot model with a massive following was arrested during the Super Bowl on Sunday after she hopped over some railing, tried to go running on the field and then flashed her ass. You can see in video of the alleged incident ...


The CDC recommends 3 things you can do to keep from getting Wuhan coronavirus, and 3 things you should not do

The novel coronavirus has killed at least 362 people and infected more than 17,400 as of Monday. The virus, which has spread around the globe but is concentrated in China, has incited panic globally as nations around the world work to combat the spread.


Wintry mix to move in for your Tuesday

Hide Transcript Show Transcript AND GIVES THE OPPORTUNITY FOR MOISTURE BY TOMORROW. SO, YOUR EVENING FORECAST HOUR-BY-HOUR HAS IT AT 38 DEGREES FALLING TO 36 BY 7:00, BY 9:00 P.M., COLD BREEZE, 34 AND WINDS WILL PUT THE WIND CHILL THE 20'S. NOW LET'S ADDRESS WHAT IS GOING TO HAPPEN GOING TOWARD WEDNESDAY ON FIRST ALERT FUTURESCAN.

That's a lot of ass!

Women fight for their right to be considered as equals in the working world all year and in one act during a family sporting event it gets totally trashed. Congrats girls.

Sorry all you losers;

This year’s Super Bowl still ranks as the second-least watched since 2009.

It also tied the second-lowest Super Bowl rating since 2005 (Patriots-Eagles: 41.1), matching Steelers-Seahawks in 2006.

Life's just an endless playground when you're a nice piece of poontang.

Sunday’s all-in audience was about 1.3% higher than 2019’s comparable number. The 102-million tally, which is an average, made yesterday’s contest the 10th most-watched Super Bowl in history."


I heard the half time show was lacking in diversity, imagine that. Also there was a kid on stage with mommy while this butt shaking mindless show went on. So what happened with these people and their #metoo movement! Sounds like these people were training that kid early to...well you know.

Sorry 8:34, your figures might be true, but what 8:23 posted is the hard bitter facts and truth of it all.

The 10th highest viewed Super Bowl in history seems impressive but also consider that Super Bowl LIV had the second-lowest viewership numbers of the past decade beating out only Super Bowl LIII in 2019. So looks good but great it ain't and nobody ever remembers who places 10th in any sport.

Trump wins Iowa like there was ever any question about that and the democrat numbers must be so weird they are past due releasing them and there appears to be an issue with them. Surely you don't think those cheating democraps are trying to pull a fast one do ya?

Who cares if people in many of the most populous American cities might not have been watching the Super Bowl because their teams weren't playing. Who gives a flying f*#k? What counts is THE CHIEFS WON!!

Actually it does, not only in your world.

Sounds to me like too many tried to fix the results. Those crooked democraps.

I'm just glad Tony picked up on my suggestion from earlier today.

Anonymous Grumpy Old Man said...
The only part of the Super Bowl TKC hasn't trolled is the halftime show.

So what's with this unofficial US holiday having most of the singing in Spanish?

And what was with the stripper poll and all the ass shaking?

At least J. Lo and Shakira didn't half-ass their performance.

I can only hope they were paid in $1 bills left on the stage.

“I don’t expect the world to act like the church, but our country has had a sense of moral decency on prime time TV in order to protect our children, We see that disappearing before our eyes. It was demonstrated in tonight’s @Pepsi #SuperBowl Halftime Show – w/millions of kids watching.”

It's indicative of America's race to the bottom?

Wow. I might believe this righteous anger if he showed 1% of the same outrage when the current president curses in public, at rallies, in front of kids, on twitter, and even at a prayer breakfast. Multiple examples about bullshit, sons of bitches, kissing ass, shitholes, and simulating an FBI agent's orgasm.

As to not further offend Rev. Graham, let me just say he can shove his clutched pearls where the sun don't shine and then STFU.

11:58 stop mixing politics and the church or we will start calling you a Cleaver lover.

Mr Graham does have a right to speak out about SB54 halftime show. A lot of mom were not to happy about it.

Stop mixing politics with the church? Let's start with fake Christian Graham. Theocracy is his jam. Hell, mixing politics and religion is the entire Greedy Old Pervert platform and base.

So you can STFU too. These same people complaining about the halftime show are the ones laughing and cheering with their kids at Trump's obscenity filled rallies.

It couldn't happen to a more deserving individual.

^^ Fuck you asshole. I hope you suffer a painful death.

The Superbowl was the 1oth most watched in history. Sorry trumpkins your narrative about nobody watching is destroyed. The nation is embracing the Chiefs! The boycotters(if there really were any) made no difference whatsoever! Also Nike set an earnings record also. Kap wins, the country wins, Chiefs win, and geezer heads explode. Yay!

J Lo was just obscene, nothing else to say! Music was good but No one wanted to see that ass and crotch up close and personal on the tv screen, unless you were already drunk.

10:02 so says the maude, matlock, diaper, weird, geezer, shitter, gramps little girl who has NOTHING to say EVER except to piss her panties over someone elses post!

The best halftime show in YEARS!

The only people complaining are older, jealous women because their body is shaped more like Terrel Suggs than J. Lo! Honestly people need to quite trying to stir up controversy EVERYWHERE.

As for kids watching, kids don't know what the pole signifies. If your kids know what pole dancing is then they were corrupted long before this half-time show.

^^^ Good point @3:51. You might have changed my mind. Seriously, thanks for leaving that note!