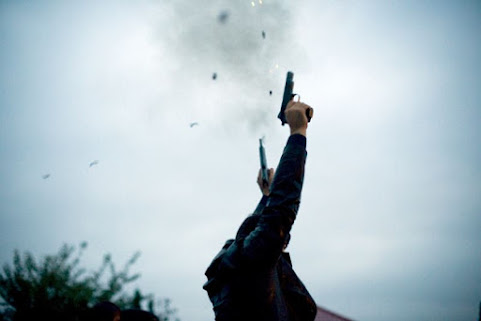 Confirmation and a look at REAL LIFE ROUGH PARTYING IN KANSAS CITY that isn't suitable for smiling talking heads on the news . . .

Drunks in the entertainment districts engaged in one slugfest after the next . . . Maybe not "serious" by local standards despite the fact that many people left teeth on the street . . . Here's our news highlight:

"The Kansas City Fire Department responded to 24 medical incidents during the event at Power and Light. The Westport entertainment district also was packed, and while there were several disturbances, none were serious.

"There were 163 reports of gunfire from 5:30 p.m. Feb. 2 to 1 a.m. Feb. 3. Police will be following up on these incidents as celebratory gunfire is extremely dangerous and illegal."

In fairness, check the full report . . .

On a normal day during these times we would have only had 158 reports of gunfire.

How did shot spotter work for them? Follow up my ass! It was so much gunfire...unless they have a magic crystal ball provided the names and addresses where the gun fire came from, this is nothing but rhetoric. They'll be about as successful as they are at solving homicides.

Heard a couple bursts of celebratory gunfire two times in less then an hour over here near the marvelous and sophisticated Plaza in all that noise and chaos.

^^Good for you boomer.

Either something is dangerous or it's not