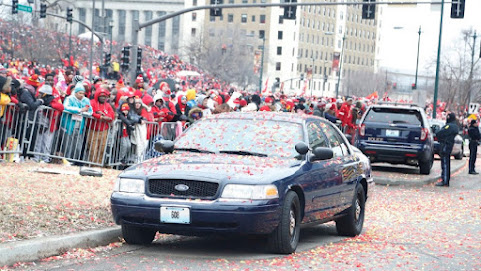 The party is over but threat of rising crime increases as the weather gets warmer.

Here's a recap of recent football festivities and a warning for the future . . .

"One wallet, five cell phone-wallet combos and 10 other cell phones were stolen. Most of these items were taken from parade-goers’ back pant pockets or coat pockets. Many of the victims reported that they felt someone touch them, but it was crowded, and they didn’t see anyone stealing anything. The stolen phones are long gone. We’ve pinged some of them in Maryland, Arkansas and Oklahoma.

"There also were 12 cars broken into during the time of the celebration – with eight of them in the area of 19th to 22nd Streets, Paseo to Holmes. That’s where several rally-goers parked.

"Criminals are opportunists. They see a large gathering of distracted people as the perfect chance to make off with some valuable property. And while Kansas City might not host such a large-scale event until next year (fingers crossed!), we have still have several sizeable gatherings coming up soon such as the Big 12 Men’s Basketball Tournament and the St. Patrick’s Day Parade.

"Kansas City loves to host events like this, but we need everyone attending to do their part to make them safe and successful. Make yourself and your property unappealing to thieves. Keep your phone and wallet on your person where you can see them. Don’t leave anything of value in your vehicle. Don’t leave your vehicle running unattended. Doing those things could prevent crimes not just at big events but would eliminate thousands of crimes in our city year-round."

Robbing drunks is a right of passage in KC.

Strange that creeps were copping a feel at the parade. KC is perv city.

This is exactly what will happen when the Royals have a downtown ballpark. Only when the games are at night, creepy thugs will follow
families to their cars.

Know a guy who got held up at gunpoint walking home from the parade.

There was a homosexual that was sexually assaulted on McGee and thought it was Grand. Really grand.

Umm, Killa Shithole is the nation's 5th or 6th ranked for most murder momentum. KCPS is crappy. Trash service is shitty. Roads are crumbling. Tax schemes are scammy. Endless funds for entertainment districts, art, free ride streetcars, plus colossal cash to cronies and crime victims' programs....YEP....try not to get ROBBED in the Democrim-run city of SUPER BOWL CHAMPIONS!!!

This is why this town can never ever be a good city and have nice things. Fucking cops won't protect you, never have never will. Long as leaders like Lucas and the other do nothing council members are in charge just expect more of the same.

That's it? A million people show up and there were only 18 criminal reports?