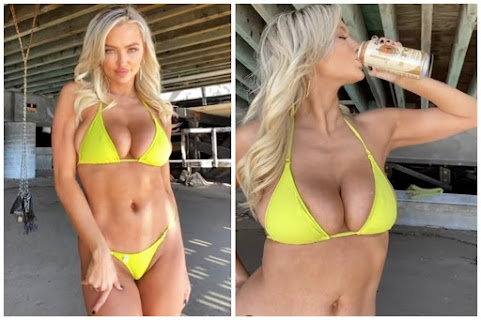 Right now we share this quickie hottie blast of energy via links concerning pop culture, community news and info from across the nation and around the world.

KANSAS CITY, MO (KCTV) -- A new KCI parking lot is now available where drivers can wait for free for arriving passengers and await a call when the passenger is ready for pick up. The old cell phone, limo, taxi, shuttle and bus lots were near the air traffic control tower.

SHAWNEE, KS (AP) - Authorities have determined that a shooting at a Shawnee store that sells e-cigarettes was accidental. Police said in a news release that officers responded to the scene around 8:30 p.m. Monday. The release says officers determined there was an accidental discharge of a firearm and that the victim was struck by the stray round.

Despite a bout of the flu that threatened to keep her down, Lindsey Pelas took to her Instagram story on Thursday, February 13, to let everyone know that she just had a workout so good that she's still feeling its positive effects.

Credit Where It's Due: Best Political Headline Of The Day


Biden’s Stuck Between Barack and a Hard Place | RealClearPolitics

For all of the agonizing within Joe Biden's inner circle over how to cure what ails the former vice president's anemic presidential run - fourth place in Iowa, fifth place in New Hampshire, presumably another setback in Nevada this weekend - there's an obvious fix: roll out Barack Obama's endorsement post haste.

President Donald Trump on Tuesday commuted the sentence of Rod Blagojevich, the former Democratic governor of Illinois who was convicted of corruption over his efforts to sell off the vacant Senate seat of Barack Obama when he ascended to the presidency.

A California woman who was evacuated on a US-chartered jet from the coronavirus-stricken Diamond Princess cruise ship said she didn't know until after landing that others on her plane had tested positive for the bug, according to new reports.

Dairy Farmers of America announced Monday that it has agreed to buy Dean Foods, America's largest milk producer, for $425 million. The dairy co-operative will also assume Dean's liabilities as part of the deal to acquire 44 of the company's facilities, as well as other assets.

KANSAS CITY, Mo. - After 20 years together, country music group Rascal Flatts is going on a farewell tour, and it will be stopping in Kansas City. The group announced in January that they would be retiring, but would go on a 25-city tour to celebrate their music with their fans.


A Cat in a Bowtie Named Sly

Question: What purrs and has 6,000 followers on Instagram? Answer: Sly James the Cat. The Insta-famous tabby cat is known for daily posts where he dons a new outfit every day. His quirky account piqued the interest of Kansas City-based account manager Kim Jones.

Colder air returns for your Tuesday with highs in the lower 40s. Morning clouds and even a few flakes of snow possible for the commute.

More than a handful of news. Maybe too much.

^^^ that would be UGLY in so many different ways.