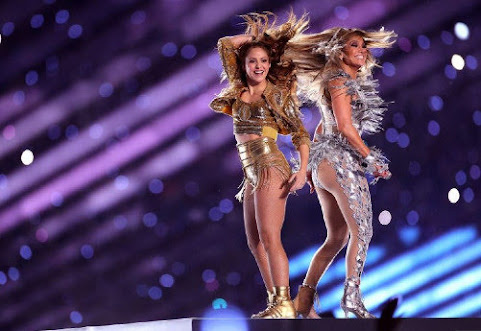 Ya know, on second thought I think a great many d-bags might be wrong about the Super Bowl halftime show . . . TKC could care less about the pop music angle. Shakira has one good song and J-Lo's music is reprehensible at best. However, we must support and encourage hottie older ladies in EXCELLENT SHAPE to continue shaking their booty as much as humanly possible. There are some things that take precedence over the culture war and ass shaking is one of them . . . Accordingly, tonight we roundup pop culture, community news and more info from across the nation . . .

Hide Transcript Show Transcript BIG EVENT KANSAS CITY IS HOSTING. KMBC 9'S MICHEAL MAHONEY REPORTS THERE ARE MORE IN THE PIPELINE. LAST SUMMER KANSAS CITIANS , CHEERED THE WOMEN'S WORD CUP CHAMPIONSHIP. THIS IS FROM THE POWER AND LIGHT DISTRICT. AND WHAT HAPPENED YESTERDAY SETS OUR CITY UP FDOR MORE SUCCESS.

Breaking News Now that medical marijuana is legal in Missouri, Kansas City is hosting its first cannabis career fair Saturday. Businesses that have been awarded licenses to operate in the medical marijuana field at the beginning of the year are looking for workers to work in a variety of positions.

KANSAS CITY, Mo. -- It was the parade before the parade, featuring a suspect speeding out of control with several police cars in pursuit just hours before the Chiefs victory parade. It started in the VIP parking lot at Berkley Riverfront Park.

The Missouri Department of Transportation is warning motorists that the main I-70 pathway to and from downtown to eastern Jackson County will be closed for the weekend of Feb. 21 for construction.MoDOT said in a post on Facebook that all lanes of I-70 will close at I-435 at 10 p.m.

WASHINGTON (AP) - Exulting in his impeachment acquittal, a defiant President Donald Trump took a scorched-earth victory lap Thursday, unleashing his fury against those who tried to remove him from office and pointing ahead to his reelection campaign.


Buttigieg, Sanders neck and neck in Iowa with nearly all votes reported

Pete Buttigieg was clinging to the narrowest of leads in Iowa over Sen. Bernie Sanders, I-Vt., on Thursday, with 97 percent of the caucus vote released. Buttigieg, the former mayor of South Bend, was at 26.2 percent and Sanders had 26 percent, with Warren running behind the pair of leaders at 18.2 percent.

All times below are in Beijing time. China says there were an additional 73 deaths and 3,143 new cases of the coronavirus in China as of the end of Feb. 6, the National Health Commission said in its daily update on Friday.


KC Royals head to spring with new look, fresh outlook on another year of growth

KANSAS CITY, Mo. - The biggest changes to the Kansas City Royals since the end of last season happened far away from the field. Now, the new-look organization wants to see some change on the field.

KANSAS CITY, Mo. - One person is in critical condition after a crash on Interstate 70 Thursday morning. According to Kansas City, Missouri, police, the crash happened on westbound I-70 near Brooklyn Avenue just after midnight. Police believe a gray Infiniti stopped in the middle lane of interstate traffic to look at a house fire on Brooklyn Avenue.

The streets outside the Sprint Center on Wednesday night were still littered with evidence of the day's festivities-confetti, empty cups and beer cans and other remnants of the historic parade and rally that celebrated the Kansas City Chiefs' second world championship. Inside the arena, the party continued.

Hide Transcript Show Transcript I'M STILL GOING TO FOCUS MY ATTENTION TO THE NORTH AND TO THE NORTHWEST FOR A SLIGHT CHANCE OF A FLURRY BY TOMORROW AS WE'VE BEEN TALKING ABOUT IS LOOK AT THE EVENING FORECAST HOUR BY HOUR BELOW FREEZING BY THE SIX O'CLOCK NEWS CASTS 30 BY 727 BY 9:00 P.M.

A celebration of vintage ass? Good for us!

Yep. That was the best halftime show I can remember

Honest laugh. Good on you.

BUT, you might not get East of State Line much. It's a pretty common look from Westside, Northeast and East Side. But that doesn't mean you're incorrect!!!

Stopped on the interstate to look at a house fire.

Try to say it without shaking your head.


Thanks TKC-- just a joke, with all the lame PC Chiefs controversies abounding lately ..

and , yes, you're right. quite common these days.. Beyonce, Nikki Minaj, Honey Badger. and plenty of others adding the lightener these days-and it looks GREAT!

If the popo was so good at stopping this chase the way they did then how come they don't do it this way all the time? Why have these chases that go on for miles and miles at neck breaking speeds.

And out of the other side of the mouth wingers whine that they don't try to assimilate.

and out of the other side of their mouth , libs like putting dicks in there