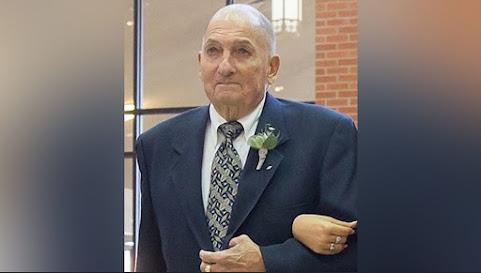 This is a space that we typically dedicate to local political power players and denizens of the discourse who engage in some sort of bold rhetorical maneuver that creates a ripple in our small pond of Kansas City voters.

However, tonight we want to share a glimpse at the big picture and dedicate this post to a man who ended his life with an action so heroic that his story has sparked interest around the nation and the world . . .

Bob Nill was 88-year-old and the last thing he ever did on planet Earth was to save the lives of two youngsters by shoving them out of the way of an oncoming car.

His selfless actions resonate as the nation's population ages and the youth-centered culture comes to terms with its own mortality. More importantly, this story contradicts the cultural war climate of the 2020 election season that's plagued by an intensely divisive political conversation which seemingly hopes to convince voters that their fellow Americans are, in fact, nothing more than bitter enemies to be condemned, conquered and ultimately silenced.

If political pundits from "many sides" are to be believed, we're all supposed to be on different teams offering no consideration, kindness or mercy for those who don't share our worldview, demographic background or values. Thing of it is, Mr. Nill had very little in common with those youngsters he saved.

The lesson here might be that talk is overrated and a simple shove in the right direction not only saved lives but inspired the entire metropolitan area by way of truly, brave, simple and selfless act.

And so we share news and testimony regarding a man who did something more important than win a game or score a political victory. The hero crossing guard threw himself into certain doom so that others could live and, maybe, demonstrated for us all that love by way of deed over word demonstrates the only real hope for the future.

Portrait Of A Hero


'The Hero in the Crosswalk:' Artist known for portraits of valor creates one in honor of KCK crossing guard

An artist known for portraits of fallen first-responders and other heroes painted one in honor of Kansas City, Kansas, crossing guard Bob Nill, who died Tuesday morning after saving two boys before he was hit by a car.Jonny Castro, a forensic artist for the Philadelphia Police Department, posted the portrait called, "The Hero in the Crosswalk," Wednesday night on Facebook.

KANSAS CITY, Mo. - The family of Bob Nill, the crossing guard killed in a crash in Kansas City, Kansas, Tuesday morning, said he "cared an awful lot for the community." Nill died following a crash in a crosswalk on Leavenworth Road near 54th Street, next to Christ the King Elementary School.

On Wednesday, the pastor from the Christ the King Parish and a teacher stood at the crosswalk on Leavenworth Road and North 54th Street to serve as familiar faces for students and staff mourning the passing of Bob Nill, the crossing guard.

KANSAS CITY, KS (KCTV) - The 88-year-old crossing guard that was killed saving children Tuesday, February 18, will be recognized on Sunday and Monday. Bob Nill was struck by a vehicle while pushing two little boys, ages 11 and seven, out of the way of an approaching vehicle.