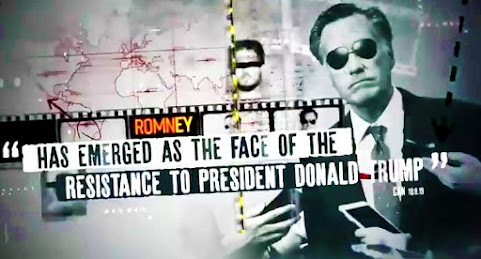 Singular opposition from Sen. Mitt Romney has exposed a rift not in the Republican party but among the American public.

A few headlines for context:

Biz Insider: Trump is ready to take revenge and make Mitt Romney's life a living hell after the Utah senator voted for the president's removal

"But my promise before God to apply impartial justice required that I put my personal feelings and biases aside. Were I to ignore the evidence that has been presented, and disregard what I believe my oath and the Constitution demands of me for the sake of a partisan end, it would, I fear, expose my character to history’s rebuke and the censure of my own conscience."

Kansas City Blogger Bill Tammeus Writes: "In the end, it's hard in such circumstances to be absolutely certain of the divine will. Beware of people who tell you they know that will in all cases. Romney also was willing to speak of his faith directly when he addressed the Senate after the acquittal vote on Wednesday, saying, "I am profoundly religious. My faith is at the heart of who I am." Wouldn't you like to hear from senators on both sides of the aisle what is at the heart of who they are?"

Nobody is buying mitt Romney’s bullshit. He’s a sore loser and using faith as a cover for his only way to poke back at trump is pathetic.

Tammeus is an extreme left wing blogger who hates Republicans and falsely claimed he was going to stop blogging.

No one of faith supports Romney because he's pro abortion.


Mitt Romney is just mad because he could even win against the ISIS sympathizer Obama. Then tried to use his faith. Now that was funny. He's a pseudo Mormon and I'm sure they will vote him out.

Wonder who found a Bible for Trump to look things up in?
God knows he's never had anything to do with Religion before he got into office.

The heart of who Romney is as a flip floppy with his finger in the wind. His record is filled with issue stand switches according to the political expediency of the moment. This is not a man of integrity

I'm sure if a Romney said that his faith told him the holocaust was a good thing, Billy Tammy would submit the person to receive the Freedom of Honor award. Hey Billy, did you send a donation to Ken Copland Ministries so so that the huckster could buy his Gulfstream G5? Don't tell me about your faith, show me.

^^and the repubturds disowning him after they pushed him to run for president. But keep drinking the Kool-Aid simp, your cult leader needs you to remain ignorant.

"Nobody is buying mitt Romney’s bullshit. He’s a sore loser and using faith as a cover for his only way to poke back at trump is pathetic."

And yet they are. Bigly. Romney had absolutely nothing to gain by doing what he did. He followed his conscience, and he said he'll suffer the consequences. Think about it. On second thought, I don't want to ask the impossible.

Was it Romney's faith that guided him to saddle buyout companies with debt, then pay himself (Bain Capital) a dividend from that very debt?
What a retard.

Was it Trump's faith that guided him to contract for work on his many projects and never pay for the work completed?

Romney is a phony straight out of central casting - just look at his smile, his hair, the whole nine yards.

He is a John McCain wannabe. It's all about getting attention, and now he's got it.

Was it Trump's faith that guided him to pay off the many prostitutes he employed over the years, even while Melania was pregnant with Baron?

Trump is a phony straight out of central casting - just look at his smile, his hair, the whole nine yards.

He's the drunk uncle you hope will be too under the weather to show up for Thanksgiving dinner, but he always staggers in.

Was it Trump's faith that allowed him to launder Russian Mafia money for decades to keep his failing business afloat?

Trump is a phony straight out of central casting - just look at his smile, his hair, the whole nine yards.

He's the penniless relative who pretends to be rich and threatens to cut you out of his will if you don't treat him real nice.

Trump is a rich boy who never has had to account for anything and thanks to the Rep party he won't ever have too. Thanks for turning the presidential position into a reality TV show. Listen to his speech at the prayer breakfast. #Idiocracy

Nonsense. Romney is an irrelevant wind-tester who you hated until the minute he went against Trump.

Give it a rest, TDS poster child.

Tammeus has as bad a grasp on politics as he does on religion.

At least Mitt didn't insult people of faith at a prayer breakfast.

And yet the economy is setting records in every category.