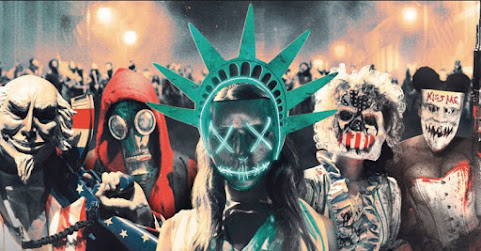 The Purge is an American media franchise centered on a series of dystopian action horror films . . . The movies present a near-future dystopian America which celebrates an annual national holiday known as the Purge, in which all crimes, including murder are legal for a 12-hour period.

^^^Yep. Only the geezers are scared tonight!

I hear the police sirens. That's a shame. We are better than than!

Just drove from downtown to Leawood; it was a blast! A crazy happy city, and we didn’t see anything criminal, just lots of honking and lighthearted revelry. Congrats, Chiefs!

^^^ nah, you stayed in your trailer all night and listened on the radio. Sorry.

11:26, why do people like you have to piss in everyone else’s Cheerios? The city is having a great time celebrating a great event and you can only make lame, pissy comments. Too bad your dad didn’t pull out quicker to spare you your life of misery and disappointment.

Pretty much just police sirens blaring everywhere now chasing after thugs and who knows what else. Back to our normal programming as the 5th most dangerous shit hole in the U.S.

We won and do we like get a dividend from Hunt family or something? Fuck, Jackson County residents did pay for the stadium and later renovations. Nah, we just give them more of our money from a job most of us hate. Pro sports are on the decline. Twenty years from now it will be a video game or virtual reality game tournament after so many concussions. Notice how quickly the Hard Rock Stadium emptied after we won? So enjoy the parade Wednesday and back to work, plebs.

What violence was there?

The only winners tonight were the Chiefs. The rest of you so called fans or a good majority that is were not that long ago calling them all kinds of vile names. The fans had to wait 50 years to see this win but it wasn't their win. Oh sure they want to ride on the coattails of the Chiefs thinking it is some sort of an award to them but in the end the only ones who benefit from this win in any way is the Chiefs themselves. So run out now and buy up all this Super Bowl merchandise that will hit the shelves here real quick and make lot of people who don't even know who you are, who if you died tomorrow could cares less just as long as you buy something first before you die so they can get even richer off of you fools who throw money at them.

What's this I read about the Puppet Lady being a slumlord? That's very fitting and says a lot about the fans in Kansas City.

Check the police scanner. Other than the gunfire there have been more than a dozen assaults reported already. Going to be a rough night.

Trump said The chiefs were in Kansas as he knows which state really supports the Chiefs.


We all knew there would be gun fire in Kansas City. We all know who did it! Lets work on getting these black people out of our city they have no business here and no right to destroy our quality of living. It's obvious that no one wants to address this problem. Start making it hard for them to live here. RUN THEM OUT! Enough is enough! Oh and wasn't it nice that Beyonce was at the game?? She can sit and act like nothing happened when she cause the death of those police officers in TX and nation wide with her BIG MOUTH! How long are we going to put up with these animals?

^^Yep, you know it! Now go to Bob Evans and let's get back to talking about the Chiefs!!

Well it wasn't really a "rough night," was it?

So Tony hoping for violence was just another made-up pipe dream downed with a warm glass of Bitter Botello Tears. CHEERZ!!!