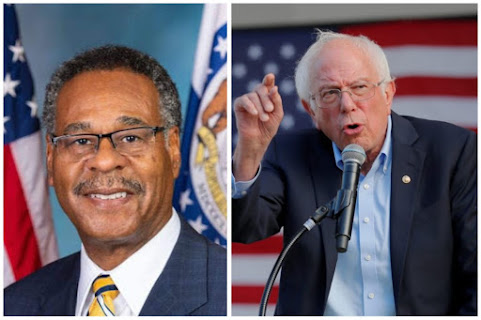 A bit of context from savvy TKC readers . . .

This is especially relevant given that the Congressman is an "establishment Democratic Party" denizen and has already offered his endorsement to Veep Joe Biden. Surprisingly, Kansas City's top ranking politico has also flirted just a bit with the idea of Bloomberg for Prez. Still, this Cuba quote offers a bit more context on the touchy subject . . .

One more note . . . For the record, Prez Obama pretty much said the same thing about Cuba as Bernie without half as much hateration.

Here's the local angle sent our way for consideration . . .

Congressman Cleaver: “Well, the world operates at its best when there’s diversity. Every nation does not need to be like the United States. And, frankly, we already have ties to diplomatic nations. And, frankly, if there is repression in Cuba we didn’t see it.”

And now, to provide more context let's take a look at the latest rhetorical challenge confronting the Bernie Bros locally and across the nation . . .


Sanders under fire from Democrats over praise for Castro regime

Sen. (I-Vt.) came under heavy criticism from Democrats on Monday after he suggested in a new interview that it was "unfair to simply say everything is bad" under the late Cuban dictator Fidel Castro's rule.


Meghan McCain tries to shut down Behar as she defends Cuba's literacy program: 'Lets not'

"The View" co-hosts unanimously panned Sen. Bernie Sanders, I-Vt., on Tuesday but co-host Joy Behar ruffled some feathers in how she defended the 2020 candidate and his comments about Cuba's dictatorship. At one point, Behar seemed to try and tout Cuba's literacy program, which Sanders similarly used as a way to defend former dictator Fidel Castro's regime.


This is why Sanders' comments on Cuba's education, health care have caused outrage in Florida

MIAMI - Carmen Peláez, a Cuban American playwright and filmmaker - as well as an active Democrat - said she was "gobsmacked" when she heard presidential candidate Bernie Sanders praise Cuba's education and health care system during a "60 Minutes" interview Sunday night.

There are two ways to misinterpret the comments Bernie Sanders made in a "60 Minutes" interview that aired on Sunday night. When asked by the host, Anderson Cooper, to explain his long-ago praise of the achievements of Fidel Castro's regime, in Cuba, Sanders said, "We are very opposed to the authoritarian nature of Cuba.


Is Bernie Sanders a deep cover Communist revolutionary? Uh, no.

Bernie Sanders has a problem. On a few occasions he has given qualified praise to dastardly Communist regimes in the Soviet Union and Cuba, thus proving his sympathy with the Red menace. So says both the army of Never Trump conservatives (numbering in my count at maybe two dozen, every one of which has a newspaper column somewhere), and various Democratic elites, including some of Sanders' presidential opponents.


I went to school in Cuba under Castro. Here's what it's like, Bernie Sanders | Opinion

Miami Herald columnist Fabiola Santiago, pictured in third grade in Cuba, was ostracized for not wearing her school uniform with the required scarf of the young Communist pioneers. Family photo Look at the little girl in the picture.

This is a familiar trap for Bernie and it'll cost him Florida in the Democratic Primary and again in the Presidential election if he makes it that far.

The Democratic Party has just started to sabotage his potential nomination.
Trump doesn't have to do a thing. They are doing the work for him.

"Sanders under fire from Democrats over praise for Castro regime"

This is total bullshit--like the Dean "scream." As Chuck is fond of saying (and saying) no one's been taught history for 50 years. To know what Cuba was like under Batista is to understand the appeal of Castro. Both were monsters in their own way, but Castro did bring improvements to Cuba along with a dictatorship. What Bernie said is we condemn Castro, but he did some good. Which is a fact.

The power elite are desperate to stop Bernie, but they're grasping at straws on this one.

Such outrage from people who have no problem with close relations with allied dictatorships like Egypt Isreal Saudi Arabia Brazil ext etc. The outrage is only for countries aligned with Russia. No coincidence that Russia is one of the 2 countries able to block total world domination by the USA empire. The Russia haters are trying to rachet up war fever while clubbing their domestic opponents. Ignore the xenophobic warmongers.

Right the Cubans of Florida were in bed with USA puppet mass murderer Batista and the mafia. They're still mad because they lost their casinos, plantations and servants.

2:18, apologize for a brutal dictatorship all you like. Tell it to people who fled Castro. I'm sure they'll appreciate your piquant insights about the mafia.

He did not "apologize" for a brutal dictatorship.

You fail because you do not engage with the main point. The fact of shifting American alliances does not magically make the cited dictatorships any better. It's not warmongering to point out the obvious. The facts are that many clueless Democrats have stood up for leftist dictators and their brutal failed regimes. Own it.

Just one of the many reasons that Bernie is doomed.

Oh, Byron. Has there ever been a moment in your life when you weren't out of your depth? Sit down, welfare cheat.

How are Cleaver, Sanders and Funkhouser alike?


All three are dead meat Dads!

Birds of a feather flock together

Bernie and the butt fuck boys are just that. Look at Bernie's failed political accomplishments as your future. He has passed what? Only life has passed him bye.

Making statements that the Castro regime did "some good things" is a little like praising a lynch mob because they used a new rope.

^^^^^ Or claiming that Putin is a human being!
Talk about praising Tyranny!


Vote for Derks Get Cleaver the hell out.

Hitler was a vegetarian and a non-smoker.

The Cuban Americans still hate Castro but his own people still adore him to this day if you listen to a lot what they say instead of just one side of the story.

7:28 is a damn liar...those people don't even HAVE freedom of speech to say what they really think.

^^^ Yet a lot of Cuban nationals keep going back even after travel restrictions were lifted. Weird.

Castro was a creep even worse. But the effort to compare Bernie's Democratic Socialism to communism is just campaign B.S.

Bernie is living the typical communist life style. The top has everything ( he has 3 homes and is worth millions) and the bottom ( Read YOU ) has nothing. So give him the credit he lives.

Order your WhoopiMopWig today! (not available in stores) A percent of proceeds go to buying Behar a brain.

Cleaver is a known thug in these streets