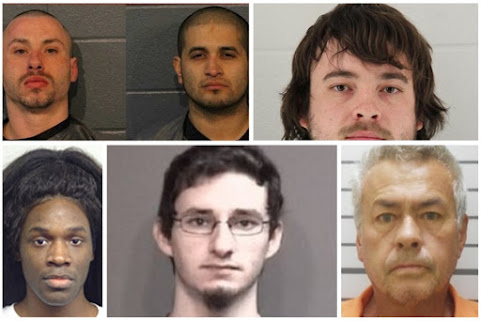 Right now we collect and share some of the more interesting news from across the metro regarding police action, court cases and ALLEGE MISDEEDS. Remember that every person in this post is INNOCENT until proven guilty . . .

Alvino and Beverly Crawford filed the wrongful death lawsuit in June in Jackson County Circuit Court on behalf of their son, Alvino Dwight Crawford Jr. The suit alleged that Green Tip Arms had reason to be suspicious that a frequent customer, James Samuels, was an unlicensed gun dealer.

Kansas City police were investigating a shooting that left two people injured Thursday evening on the northeast side of the city. The shooting was reported on Indiana Avenue at Sixth Street just before 6:15 p.m. Police at the scene said it appeared that someone pulled up in a vehicle on Indiana Avenue and shot a man and a woman in the street.

Tough Talk But No Body

COLUMBIA, Mo. (AP) - The American husband of a Chinese woman who has been missing since October was charged Wednesday in her death, even though her body hasn't been found. Joseph Elledge, of Columbia, Missouri, was charged with first-degree murder in the death of 28-year-old Mengqi Ji, according to court records.

The Cass County Sheriff's Office said it has taken into custody two men who led deputies on a high-speed chase Tuesday night that reached speeds of than 100 mph and lasted more than 30 minutes on gravel roads and highways.

KANSAS CITY, Mo. - A Kansas City-area mother says she is feeling relief after a horrific, years-long ordeal is finally over. That's what Rosalynn McGinnis told 41 Action News after the man who kidnapped her at age 12 and held her captive for nearly two decades was sentenced Thursday.

(AP)-- A retired Catholic priest has been charged in Missouri with multiple counts of child sexual abuse stemming from a statewide investigation of abuse by Catholic priests. Seventy-six-year-old Frederick Lutz, of Springfield, was charged Tuesday with forcible sodomy, sexual abuse and two counts of statutory sodomy. His bond was set at $125,000 cash only.


Sheriff: Body found in Buchanan County is that of 22-year-old woman

BUCHANAN CO., MO (KCTV) - New details about have been released about the investigation into a woman's body found in a bag by the roadside in Buchanan County. Sheriff Bill Puett told KCTV5 News that the victim, originally thought to be a woman in her mid-50s, was actually 22.


Ex-Trooper In Handcuffed Drowning Incident At Lake Of The Ozarks Gets $200K, But Can't Be A Cop In Missouri

A former Missouri Highway Patrol trooper involved in the 2014 drowning of a handcuffed Iowa man ended his fight to get his job back after the state agreed to pay him more than $200,000. Attorneys for Anthony Piercy filed motions last week to dismiss his pending court cases regarding his old job and the revocation of his license to be a peace officer in Missouri.

ST. LOUIS - Taylor Hirth saw the worst and best in humanity all in one night in February 2016. First, she woke up in her bed between her sleeping toddler and a strange man who put his hands on her mouth. "There was a man standing in the doorway, telling me to get on my stomach," she said.

Being part of history wasn't the focus for Alfred Eugene Bell Sr. - but helping keep the Olathe community safe was. Despite becoming the first African-American police officer at the Olathe Police Department in the heart of the civil rights era, his family never heard him mention his race or how it affected his job with the department.

Dug around for white criminals because none of the 22 black KCMO murderers this year have been caught.

I see a couple of Latinx "denizens" in there.

I see a couple of Nazi chimps picking up their own turds and throwing them at everyone else.

Nazis don't even care if a white cop kills a white kid, they are so obsessed with black people.

Yes, God forbid we mention the Blacks are once again committing a record rate of Murder this year. Very Racist to point out a fact.

meanwhile, the nazis are making your corn flakes.