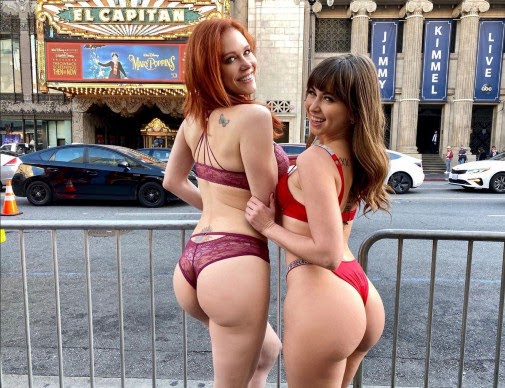 Professional hotties Maitland Ward And Riley Reid have earned quite a reputation among the celeb circuit for their bodies of work and now they inspire our latest update of pop culture, community news and info from across the nation and around the world.

A new Buck O'Neil Bridge that would provide a direct connection between U.S. 169 and Interstate 35 - and include a 10-foot-wide path for bicycles and pedestrians - is the preferred plan of the Missouri Department of Transportation. A public hearing has been scheduled for March 10 from 4 to 6 p.m.

More than 80 top businesswomen came together to offer their help and support to more than 300 other women as part of the Kansas City area's seventh-annual Mentoring Monday. The event, held at Fiorella's Event Space in Overland Park, brings together experienced businesswomen, who serve as mentors, with other women seeking career advice.

KANSAS CITY, Mo. -- A new virtual trail is documenting more than 100 years of black history in the metro. The African America Heritage Trail of Kansas City aims to connect sites and tell untold stories. "We have been working over a year with a community to put together our virtual trail," said Jeffrey Williams, director of KCMO City Planning & Development.


If the coronavirus hits America, who's responsible for protecting you?

The outbreak of the coronavirus - and Covid-19, the disease it causes - in mainland China has provoked a response the likes of which the world has never seen. Hundreds of millions of people in the country have had their travel restricted; many have not even been allowed to leave their homes.

A federal appeals court on Wednesday handed a major win to the Trump administration in its fight against "sanctuary" jurisdictions -- ruling that it can deny grant money to states that refuse to cooperate with federal immigration authorities.

2020 presidential candidate Mike Bloomberg has stalled in national polls ahead of Super Tuesday. The slowed momentum comes following a dismal performance on the Nevada debate stage on Feb. 19, the first time he faced his rivals and their attacks.


Lent 2020 fish fry list: All the fish fries to try in Kansas City

KANSAS CITY, MO (KCTV) -- Below is a list of Kansas City-area organizations that will be holding Lenten fish frys this year. To get a fish fry added to the list, email the information to kcnewswebteam@meredith.com. Avondale United Methodist Church, 3101 NE Winn Road, Kansas City, Missouri (4-7:30 p.m.

Brian and Katherine Schell were anticipating a great life in the historic brick mansion they bought last year across from Kansas City's Loose Park. Now, only months after their September purchase, they are asking the city's permission to demolish the 6,000-square-foot Georgian Revival home from 1918, that has been on the National Register of Historic Places since 1984.

As the widening coronavirus outbreak stokes fears of a worldwide pandemic, it's worth remembering that the 1918 Spanish flu pandemic may have started in Kansas. And it hit Kansas City particularly hard. Lessons from that time still resonate today.

At some point, the day had to come. With his Super Bowl LIV hat, jacket and shoes off to the Pro Football Hall of Fame in Canton, Kansas City Chiefs head coach Andy Reid publicly turned the page on his team's championship win Tuesday in Indianapolis.